New Jersey Department of Education documents provide an itemized breakdown, as well as laying out the early plan, for the $241 Hoboken school expansion plan that will be on the ballot on January 25th. 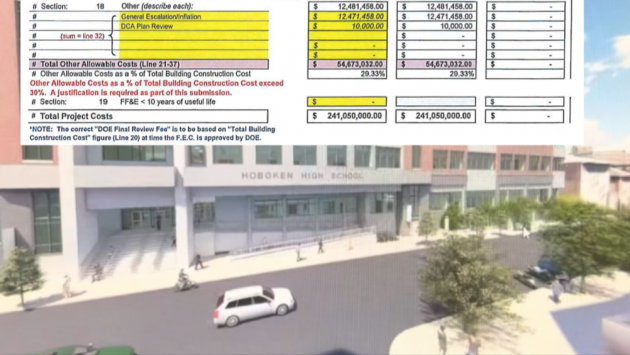 The summary cost estimate form was submitted by the district to the New Jersey Department of Education on November 3rd, the day after Election Day and was recently obtained exclusively by HCV.

“Superstructure” costs come out to $21,723,975, with nearly all the other financial needs for the 374,700 square foot project listed related to construction, electrical, or plumbing.

Additionally, a New Jersey Department of Education School Facilities Project Application form from September 25th, 2019 pegged an April 3rd, 2021 referendum with a building that spanned 286,000 “gross square feet” at a cost of $187,116,994.

“The proposed new Hoboken High School on the District-owned JFK Stadium site will provide the Hoboken Board of Education with an upgraded High School facility equipped to address the vast course offerings currently provided to enhance a 21st century learning environment,” the detailed scope of work description says.

The application also has the box checked for “other capital project (no state funding).”

At the board of education’s December 21st open meeting on the project, Superintendent of Schools Dr. Christine Johnson said that former Abbott school district like Hoboken are no longer eligible for New Jersey Schools Development Authority aid.

August 4th, 2021 correspondence between Johnson and the NJ DOE reveals the current enrollment numbers versus the figures projected for the 2025-2026 scholastic year.

These projections indicate that pre-K enrollment will go through the roof in the next five years, from 26 students to 820. The kindergarten through 5th grade enrollment is expected to stay almost exactly the same, from 1,391 to 1,393.

“The Department has determined that proposed District capacity, in accordance with the proposed enrollments, is adequate for approval of the District’s LRFP [long-range facilities plan] amendment,” the letter reads.

“The Department will require a current enrollment projection at the time an application for a school facilities project is submitted, incorporating the District’s most recent Fall Enrollment Report, in order to verify that the LRFP’s planned capacity meets the District’s updated enrollments.”

The expansion plan, which includes a football field, ice skating rink, pool, 27 general classrooms, and 11 specialized learning rooms, would cost roughly $644 per square foot – or about a $496 tax increase per household – and has drawn strong opinions from both sides.

In addition to a consolidated group looking to get the project voted down, 2nd Ward Councilwoman Tiffanie Fisher said the plan looks a bit too extravagant to support right now, while Councilwoman-at-Large Emily Jabbour said emphatically that she will be voting yes.

Today is the last day to register to vote for the referendum, with the BOE’s reorganization meeting scheduled for 7 p.m. at the Demarest School, located at 158 4th St.

Additionally, the next public meeting to discuss the referendum is at Hoboken High School, 800 Clinton St., Thursday at 7 p.m.