The new Jersey City ward maps show major potential changes throughout the city, with big shakeups on the horizon according to preliminary maps. 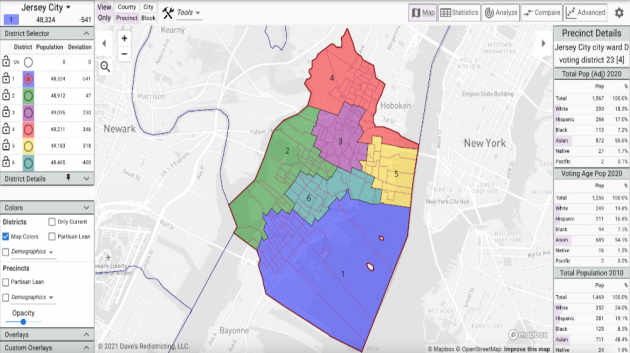 “Re-warding is not a process created to make people happy, but it’s a pretty straightforward process for us: we’re looking to decrease the deviation,” Hudson County Board of Elections Clerk Michael Harper told HCV over the phone.

“You [redraw] wards by population and you draw district lines by registered voters and maintain them by voter turnout. Ironically, re-warding is not a rewarding process.”

The redistricting of municipal wards occurs about every 10 years after each U.S Census and is completed by the Board of Ward Commissioners. The municipal clerk serves as the secretary for each of these boards.

Therefore, in Jersey City, the secretary is City Clerk Sean Gallagher, John Minella – a top aide to Mayor Steven Fulop – is the chair, along with five other board of elections commissioners (besides Minella) who were previously appointed by the governor.

“The ward commissioners shall fix and determine ward boundaries so that each ward is formed of compact and contiguous territory,” according to the state statute on municipal ward law.

According to Harper, the commissioners must approve the new maps by January 16th and submit those to New Jersey Secretary of State Tahesha Way by January 21st.

He also said that the re-warding process would not necessitate any special elections, even in a situation where a council members is drawn out of the new ward.

However, if that were the case, they would have to move within the boundaries of the new ward one year prior to the 2025 municipal elections if they wanted to seek re-election.

The new maps show potentially huge changes on the south side: with Society Hill and the area designated for the Bayfront moving to Ward B, as well as Liberty State Park and the Liberty Science Center/SciTech Scity heading to Ward A.

“I think it’s unfair. If this is the best way to change the map, then I will adjust to the change. My issue is the lack of communication with residents and my office. The people voted me back in and they deserve to know this process is occurring,” said Ward A Councilwoman Denise Ridley.

“What I’m really concerned about is the lack of advertisement about the redrawing of the maps and trying to get clarity on why they were drawn this way … We need better advertising, more dialogue. Is this a diverse commission? Who approves it after they look at it? There’s just so much uncertainty,” said Ward F Councilman Frank “Educational” Gilmore, who has spoken out against SciTech Scity and the privatization of LSP.

Fulop, who was the Ward E councilman the last time the wards were redrawn, reiterated that this isn’t a city function and therefore municipal officials can’t do anything to suggest and/or enact changes.

“Two important points here are that, first the new proposed map is not something that the city has any flexibility on because the rules are prescribed by state law on what needs to happen here and those laws are very clear on timing and circumstances. Secondly, the people deciding the ward map aren’t any elected officials but rather appointments by the Governor to the Board of Elections so this isn’t a partisan map, but rather based on the prescribed law and rules of fairness,” he said.

“On the personal front, I remember going through this in 2010 and everyone is always upset by this at first and then they eventually adjust as  unfortunately the reality  is that there is little flexibility any of us have over this process due to population growth and laws.”

The Board of Ward Commissioners will host a virtual meeting on the subject tomorrow at 5:30 p.m. on Zoom and a the new ward maps can be viewed here.