Despite the city scrapping their previous redevelopment agreement, two property owners near the proposed Hoboken Hilton Hotel still aren’t on board, saying in a new lawsuit that the new $3.2 million in developer givebacks “amounts to a slush fund for the city.” 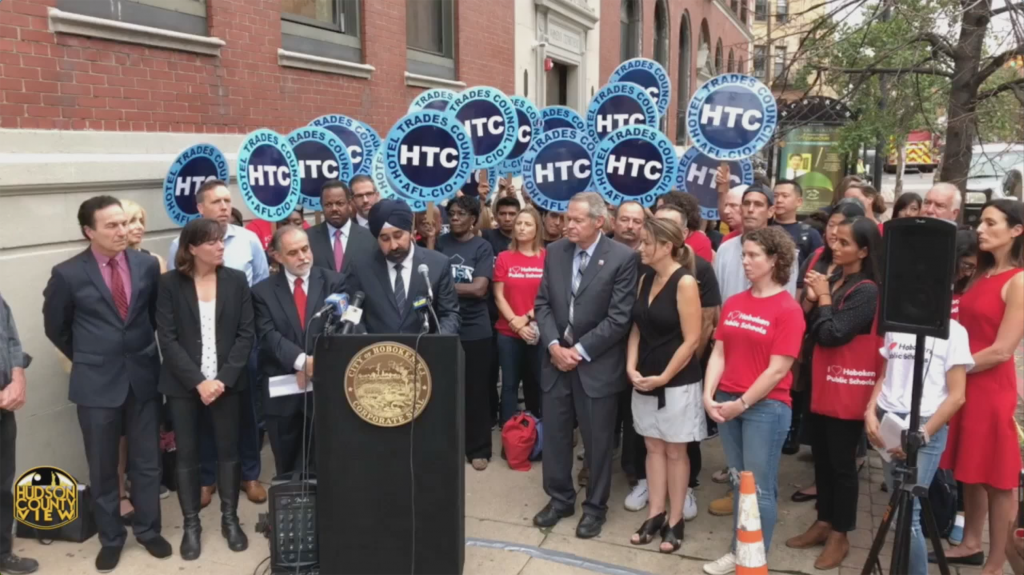 “The 2019 Redevelopment Agreement and the Escrow Agreement are a transparent attempt to circumvent the Court’s opinion and order in the Prior Litigation by creating what amounts to a slush fund for the City to use in the future as it deems fit,” Hoboken Land Building, L.P. and Hoboken Holdings, L.P. said in a lawsuit filed in Hudson County Superior Court on August 2nd.

The same two entities filed suit back in November, claiming that the $4.85 million in proposed community givebacks were “a blatant quid pro quo.”

As it turns out, Hudson County Superior Court Judge Anthony Dâ€™Elia agreed with them, ruling in March that such a plan would set precedent for municipal agreements that would lead to “abuse and fraud.”

On May 15th, 2019, the Hoboken City Council responded by rescinding the 2018 Redevelopment Agreement that had passed easily back in October, at the time paving the way for Mayor Ravi Bhalla to sign the aforementioned deal.

From there, the council approved new terms for redevelopment on June 19th, though according to the suit, this deal was actually worse for the average Hoboken resident and/or commuter.

“Like the 2018 Redevelopment Plan Agreement, the 2019 Redevelopment Plan Amendment would increase traffic congestion, impair view sheds, reduce light, increase shadows and otherwise detrimentally affect the properties of Plaintiffs and other property owners and the people of Hoboken,” the court document says.

The suit is seeking to make the latest redevelopment agreement null in void, as well as asking the city to cover attorney’s fees and costs of suit, as well as any other relief the court deems to be just and equitable.

In a statement, the KMS Development Partners, the developer for the hotel project, pushed back against the allegations being made this time, noting that they are confident the court will not have any issues with the 2019 redevelopment plan.

“The basis for this second legal filing is fundamentally flawed and grossly misrepresents the terms of the 2019 Redevelopment Agreement. It is designed to hold us and the City hostage in order for the plaintiffs to push for their own development interests,” they said.

“For example, this latest filing claims that the ‘city controlled escrow account to be used by unspecified and undetermined purposes to be determined upon in the future.’ This is inaccurate. The 2019 Redevelopment Agreement clearly provides on Page 65, a specific explanation consistent with the Judge’s previous ruling for the utilization of these escrow funds. These funds are to be used for a narrowly defined set of uses that are specifically related to ‘the impact of the Hotel on infrastructure, the community and community services.'”

They further state that the agreement provides eight examples of public purposes for the escrow funds to be used such as flood control, enhanced storm retention, open space and improved bicycle and pedestrian access.

Furthermore, they called Hoboken Land, L.P. “duplicitous” for filing another lawsuit, given that they are attempting to build 20 stories of residential units on their property that falls within the Post Office Redevelopment Plan.