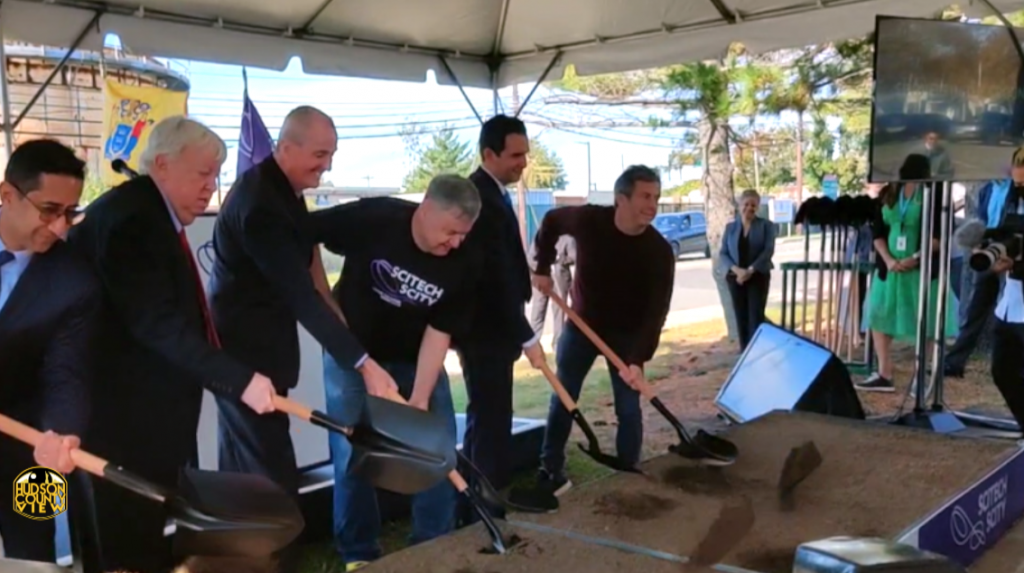 SciTech Scity, scheduled to open in late 2023 or early 2024, will comprise of an eight-story business incubator with a 40,000 square-foot state-of-the-art conference center, and a 60,000 square feet of research and development labs and workspaces.

“We will be breaking ground on an entirely new and exciting new world of possibilities in education and innovation and in partnership, with collaboration – not just for Jersey City or Liberty Science Center – but for our entire state,” Murphy said during a press conference this morning.

Murphy asserted that SciTech would make New Jersey a global leader in education, noting that Bell Labs in Berkeley Height was a similar center of innovation.

During his remarks at the podium, Fulop said he has been working to make Jersey City the best mid-sized city in the country.

“There was no shortage of developers interested in building residential housing. The land appraised for $20 million and we control the zoning with the unobstructed views of the Statue of Liberty and the New York skyline,” Fulop said.

He noted that there was a great deal of opposition to Sci-Tech Scity, referencing a 2017 council vote on the whole project and then the one in March regarding the STEM high school that will be run in conjunction with the county.

Fulop praised everyone involved for not caving to pressure from critics, further stating that of the multiple goals of the project, he cared the most about creating the best public school in the country.

“It is a pleasure to expand our long-held vision of science and technology education as a driver of sustainable economic growth here in Hudson County by becoming part of this remarkable global platform dedicated to that mission,” DeGise added.

He said that when the LSC was launched in 1993, it did not emphasize the fact that it was in Jersey City.

“Wars in the future may not be fought with people with helmets and hand grenades on them. Wars are going to be fought by people with white lab coats and masks over their mouths. We’ll be very proud to be preparing for whatever comes right here in Jersey City at this fine facility,” the county executive added.

He noted that while Jersey City makes up 40 percent of the population of Hudson County, students from municipalities such as Guttenberg and East Newark will still be eligible to attend as well.

The county has also made a commitment to have 60 percent of their students come from Jersey City, though there is no formal agreement in writing yet for that provision.

Hoffman said Fulop challenged them to devise a very ambitious plan for the post-industrial land and that he project has been in the works since 2016.

“We are building a business optimizer that’s a new breed of innovation center that’s both going to maximize commercial success and social impact. We want to jump start the creation of early-stage science and technology companies that will radically change the world,” he said.

Hoffman also said that the Sheba Medical Center, an Israeli hospital, will be the first tenant of Sci-Tech Scity.

“It’s the Mayo Clinic of the Middle East,” he said.

“We are looking to change healthcare around the world. We want to bring our entire ecosystem, more than 100 members around the world, to converge here,”added Sheba Medical Center Chief Medical Officer Eyal Zimlichman.

Furthermore, LSC Vice Chair Laura Overdeck said that the high school will help the United States deal with its high percentage of adults who have sub-par math and language skills.

“We are tied with Kentucky. Other places are passing us. But we’re not going to let that happen,” she said.

Phase I will be complete following the completion of $300 million in new construction on 12.5 acres of land donated by Jersey City. This includes the construction of Edge Works, Liberty Science Center High School, Scholars Village, and Public Commons.

Developed by Alpine Residential, Scholars Village will be residential housing for innovators, scientists, entrepreneurs, STEM graduate students, and individuals who want to be a part of the SciTech Scity community.

The Liberty Science Center and SciTech Scity will span 30 acres and be called the Frank J. Guarini Innovation Campus, after the former congressman, real estate developer, and philanthropist from Jersey City who donated $10 million to LSC in 2019.

That gift was matched 50 cents on the dollar by a $5 million pledge from LSC Board Co-Chair David Barry. Ernst & Young, Verizon, Bank of America, and Horizon Blue Cross Blue Shield of New Jersey have signed on as Corporate Founding Sponsors and made seven-figure contributions.

In total, $42 million has been raised for Edge Works, with the remaining funding expected to come from financing and government sources.

An additional $5 million was raised to jumpstart the creation of Liberty Science Center High School, with Laura and John Overdeck providing a gift which was matched by contributions from Josh and Judy Weston, Joe and Millie Williams, PSEG, Norm Worthington, and the Paul and Phyllis Fireman Charitable Foundation.

The entire press conference streamed live on our Facebook page and can be viewed below: 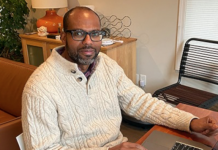