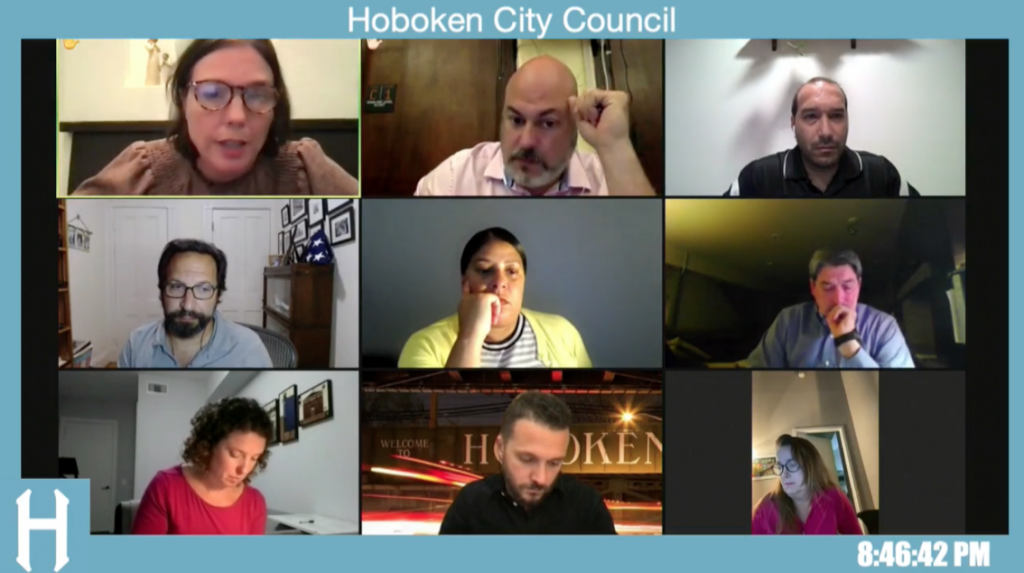 “I am just curious if the city has any liability with regards to … that the firm that the ABC (alcoholic beverage control) board attorney is employed by also representing liquor license holders in matters before the Hoboken ABC Board,” Giattino asked Corporation Counsel Brian Aloia at Wednesday evening’s counsel meeting.

“I will certainly get you an opinion on that subject,” he responded.

“Please do because I’m very sure that other authorities outside of Hoboken also are looking into that, much appreciated,” added Giattino.

About 15 minutes later, Fisher requested that Aloia find an alternate method to looking into the matter, since now former ABC board counsel John Allen, a former chief of staff to Mayor Ravi Bhalla, worked in corporation counsel’s office.

” … If it pans out to be true, this is a really big issue and I don’t think that the existing corporation counsel’s office would be appropriate for them to be involved in this at all.”

Allen has been working at the law firm Schenck, Price, Smith & King LLP for about a year, the same company he worked for about six months before entering Hoboken government after coming up short in the council-at-large race on Bhalla’s 2017 ticket.

“I just want to make it real clear that personally, I don’t fell that there’s any major conflict: anything that’s been shown to me and anything that’s been before the city council. I just always worry about getting into these political kind of conversations when it comes to somebody’s professional license,” said 3rd Ward Councilman Mike Russo, also a physical therapist.

Fisher then said that the professional code of conduct for lawyers in New Jersey indicates that they cannot sit on both sides of the table for a public entity.

Just before the meeting concluded around 9:15 p.m., Giattino said that she submitted an Open Public Records Act (OPRA) request on October 15th seeking any ABC board applicants being represented by SPSK and has been told she won’t get a response until after the November 2nd municipal elections.

City spokeswoman Marilyn Baer told HCV that Allen resigned as counsel to the ABC Board on October 13th, which paid a $15,000 stipend. He earned $124,500 as assistant corporation counsel last year, according to public records.

“As previously disclosed, Mr. Allen is affiliated with Schenck, Price, Smith & King LLP. Upon learning that a license holder retained an attorney at the firm, Mr. Allen chose to resign instead of simply recusing himself on individual matters pertaining to the license holder,” she explained.

Back in April, Giattino put Allen in her cross hairs for being the “liaison to the mayor for bars and restaurants.”

She and Fisher introduced a resolution in June asking for such a liaison and ABC counsel to be two different people, but the measure was voted down.

“Hoboken’s Corporation Counsel Brian Aloia emailed me October 18 that he had no knowledge of his own employee John Allen’s law firm representing liquor license holders in Hoboken. This can only mean that Hoboken either has no controls in place to manage conflicts like this or that the administration believes this type of behavior is acceptable,” Giattino said today.

“How does Schenk Price knowingly take on clients that go before Hoboken’s ABC Board when on their own website they describe Allen as serving as Board Counsel for that same board? And what does it say for Hoboken when its mayor and corporation counsel, both attorneys, allow this to happen under their watch?,” Fisher added.