After two lawsuits in a little under two years, the Morris Canal Manor project is finally moving forward after the latest court filing has concluded: paving the way for 400-plus unit development with a rec center, retail plaza, and retail incubator. 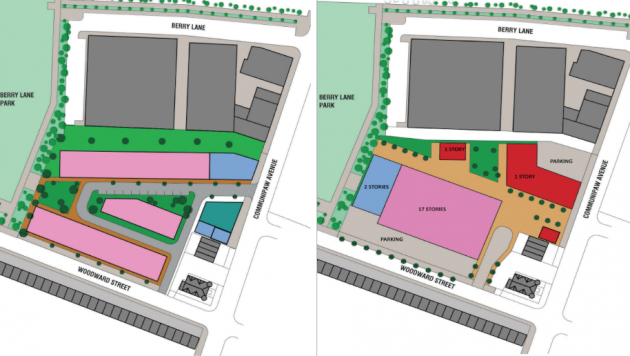 “While this baseless lawsuit has done a tremendous disservice to our community, it is my hope that residents now hear the full truth with the court’s dismissal so that we can move forward on this important neighborhood improvement project together,” Mayor Steven Fulop said in a statement.

The latest, and likely final, iteration of the Skyline Development Group project at 417 Communipaw Ave. will have up to 420 units – including 21 affordable units – a 22,000-square foot rec center; 14,00 square-foot retail component, basketball court, 40 off street parking spots, and preservation of the Steel Tech Head House – among other amenities.

“This redevelopment project is a win for the community as we incorporate numerous benefits that were put forth by the City as well as residents,” added Jersey City Redevelopment Agency Executive Director Diane Jeffrey.

The Morris Canal Redevelopment Area Community Development Corporation sued the city and the local planning board back in February 2021, back when it was a 416-unit proposal, alleging “illicit spot zoning.”

Hudson County Superior Judge Anthony D’Elia voided amendments to the project and sent it back to the planning board in August of the same year. The planning board then approved the new amendments in December, before the city council did so in March of this year.

By May, the MCRACDC refiled, claiming that the planning board barred anyone affiliated from the group from commenting during the hearing, as well as alleging they did not explain how the project was consistent with the city’s Master Plan.

Finally, on October 24th, Bill Matsikoudis, who was representing the MCRACDC in the matter, wrote a letter to D’Elia that said their concerns with the project had been “assuaged,” and therefore, would not litigate it further.

MCRACDC Executive Director June Jones said in a statement that they decided not to continue with litigation after the developer, Lou Mont, met with residents and took their feedback in stride.

“After winning round one in a lawsuit about this project located in the heart of the Lafayette neighborhood, Morris Canal filed a second suit, which it voluntarily dismissed because it was satisfied with modifications to the final design and other elements of the project that were made by the developer after he engaged and listened to the community,” Jones noted.

“So, in fact, the lawsuit was not anti-government, but pro-community; and from the perspective of the community, very successful: our voices does matter!