In a letter to the editor, West New York Board of Education Trustee Lorena Portillo wants to set the record straight regarding Trustee Jonathan Castaneda’s account of the October 5 meeting of the board. 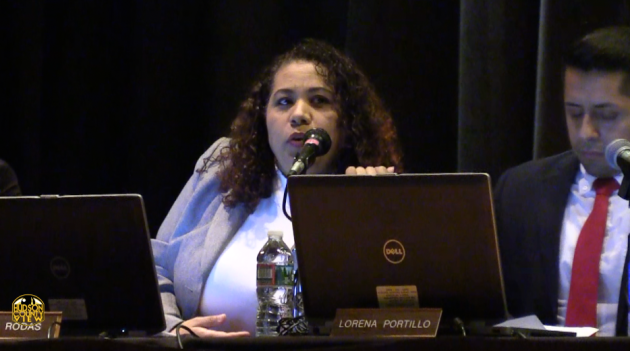 I am also compelled to respond and correct Trustee Castañeda’s statements. At the October 5th meeting, the board president decided to change the order of the meeting while lacking the necessary votes to do so.

Trustee Cheng attempted to speak, and had his microphone shut off by the president, whom disrespectfully yelled, “this is my meeting.” Being that standard board meeting rules were not being followed, along with being deprived of his right to speak, Trustee Cheng walked out of the meeting.

As I was arriving to the meeting, I was informed of what had just transpired and to my surprise the auditorium was brimming with frustrated, and upset teachers.

I quickly realized that this meeting had been scheduled as an attempt to appear supportive and interested in resolving the teachers’ contract blank weeks before the election.
Having said that, let’s review the facts:

∙ At the April 13th board meeting, all the trustees (except for Mr. Rodas, Mr. Cheng, and I) voted against allowing the teachers to speak, knowing that the teachers had sat through a two- and-a-half hour ceremony.

After Mr. Cheng, Mr. Rodas, and I protested and threatened to leave the meeting if the teachers were not allowed to speak. The other trustees had to concede and allow them to speak otherwise there would not have been the minimum required number of trustees to continue with the meeting.

∙ As trustee Castañeda stated, “Our teachers show up to work every day to train our communities’ next generation of leaders.” Why then, should they be denied their right to speak? Why should they have to wait extra hours to get their word in?

∙ Next, the meeting in which we discussed the annual budget, the voting went similarly. All trustees except Mr. Cheng, Mr. Rodas, and I, voted against passing a budget that did not include a solution to the teachers’ contract.

Thus, we asked the business administrator to find a way to acquire extra money. Fortunately, he was able to attain an extra $850,000 that was used for the teachers’ contract.

∙ In regards to our shared agreements, we could have saved over half a million dollars had it not been for trustee Castañeda’s poor negotiating skills and conflict of interest. Instead, he suggested saving money by hiring retired police officers rather than keeping our respected WNY police officers in our schools.

∙ We have to ask ourselves, Who had been taking advantage of negotiations in order to fulfill their political agenda just weeks before the election?

What’s really a slap in the face to our “democratic values”? The fact that we walked out, or the fact that trustee Castañeda denied the teachers their right to speak until he was forced to do so?

Perhaps our president refusing to let trustee Cheng speak, going as far as shutting off his microphone? That was plainly disrespectful, petty, and quite unethical. Who is behind our “Democracy being held hostage?”

∙ Trustee Castañeda said: “But how do you forgive holding hostage the paychecks that feed our teachers, our support staff, our janitors, our bus drivers and their families? This was not only unethical but immoral.”

Unethical and immoral is putting your own interests, as well as the interest of the politicians you support, ahead of those who elected us to be their voice on the board.

∙ Trustee Castañeda stated “…we were able to approve an agreement thanks to the leadership of President Parkinson and Vice President Gonzalez.”

According to our bylaws and our board attorney, President Parkinson, is prohibited from participating in contract negotiations. In fact, trustee Rodas is the chairman of negotiations, yet does not seem to be receiving any credit.

We had an opportunity not to re-elect board members who have not done anything for the school district. Some of the recent actions taken by a few trustees were motivated by pure greed and fear of not being re-elected come November elections.

Having an opposing team essentially forces them to give the union a contract right before the election. The teachers have not been “led” to believe we are fighting for them. On the contrary, we have proven it.

It is quite clear who is doing their job and who is not. I’m sure the teachers, staff, and parents will remember who has supported them and who found the funds for their contracts.

Opinions are her own and not those of the West New York Board of Education or its other trustees; nor are
they the specific views of anyone affiliated with the Board of Education including but not limited to other
trustees, administrators, staff, or its’ contractors.

Despite unlikely odds, Oseguera confident about congressional challenge against Sires