In a letter to the editor, longtime state Senator (D-33)/Union City Mayor Brian Stack critic Joe Blaettler asks how Hoboken Democrats can praise the state legislator as an effective leader.Â 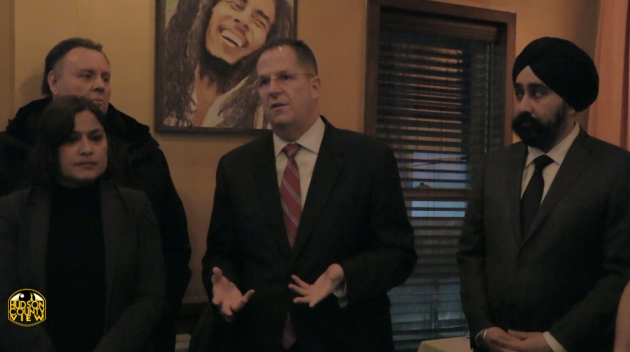 Having watched and read the recent story published by the Hudson County View titled â€œBhalla Rallies Hoboken Dems to Elect Stack as the Next HCDO Chairman,â€ I could not believe how many elected officials actually state that Brian Stack is all about the people of Hoboken.

Yes, if you like a card for your Birthday, a free Turkey, hot dog or handout then yes, Brian is your guy. If you are looking for fair representation in Trenton, I suggest you look elsewhere.

Mayor Bhalla was quoted as follows: â€œThere are a lot of issues where we just do not get our fair share of the pie: we subsidize a lot of the streets and roads, the parks, the jail, the courthouse and we pay the highest percentage of taxes.â€

While the statement is true, the reason is not solely the fault of the county. A bigger reason is Senator Stackâ€™s failure to secure proper funding for Hoboken where he serves as Senator and should provide equal representation.

While Stack is successful in securing hundreds of millions of dollars for Union City, what does he secure for Hoboken? When you go to Union City you will see new schools, swimming pools, parks and roads all paid for with state dollars.

Can anyone tell me the last time Brian Stack secured money for a new school in Hoboken? How about a swimming pool or new police station? Recently, I drove down Washington Street in Hoboken and I thought I was in Bagdad, Iraq.

I was lucky to escape without blowing out the tires on my car. However, go to Union City and look at all the new roads. A few years ago, Stack secured $2.7 million from the Port Authority for new roads in Union City; what did Hoboken get? Zero.

If Stack cares so much about Hoboken why is he not getting funds to redo Washington Street? Three years ago, Stack got Christie to give him a five-million-dollar loan to balance the Union City budget, how much of the loan did Hoboken get? Zero.

Last week, the new school aid figures were released. Union City was awarded a 9 million dollar increase, increasing their overall funding to $190 million a year from state taxpayers. The levy to Union City taxpayers is 5%.

What did Hoboken get? Zero percent increase with a total annual funding of $10 million from the state. Whereas Union City taxpayers only contribute 5% locally for education, Hoboken taxpayers are forced to pay 54.5% locally to fund their schools.

Where has Stack been in fighting for school aid for Hoboken? Maybe this is one reason Hoboken taxes are so high. Stack seems to get a lot of state funding for Union City but nothing for Hoboken.

Now that Brian Stack wants to take over the county he comes to Hoboken asking for support, and local politicians stand next to him praising him. Did any of them ask Senator Stack before we commit to you, what have you done for us lately?

While Bhalla gets what he wants– Mayor of Hoboken and then a second high paying job with a politically connected law firm, and Stack gets to be the next Chairman of the HCDO, Mayor, Senator and King, what do the people of Hoboken get?

Just more lip service about taxes which are too high and it is â€˜everyone elseâ€™s fault.â€™

I find it ironic that many have attacked and questioned Councilwoman Jen Giattino for being a Republican. Yet Brian Stack endorsed Chris Christie (the worst Governor New Jersey ever had) two times and called Christie the â€œbest Governor everâ€ (he left office with a 14% approval rating).

Nothing, he was too busy taking care of Stack. The point is, Stack is out for Stack. Since most politicians are afraid of him, they stand behind him like sheep being led to slaughter, lying to the public about how great he is.