Renderings leaked to Hudson County View provide a first look at what a potential ferry maintenance and refueling station at Hoboken’s Union Dry Dock would look like for New York Waterway. 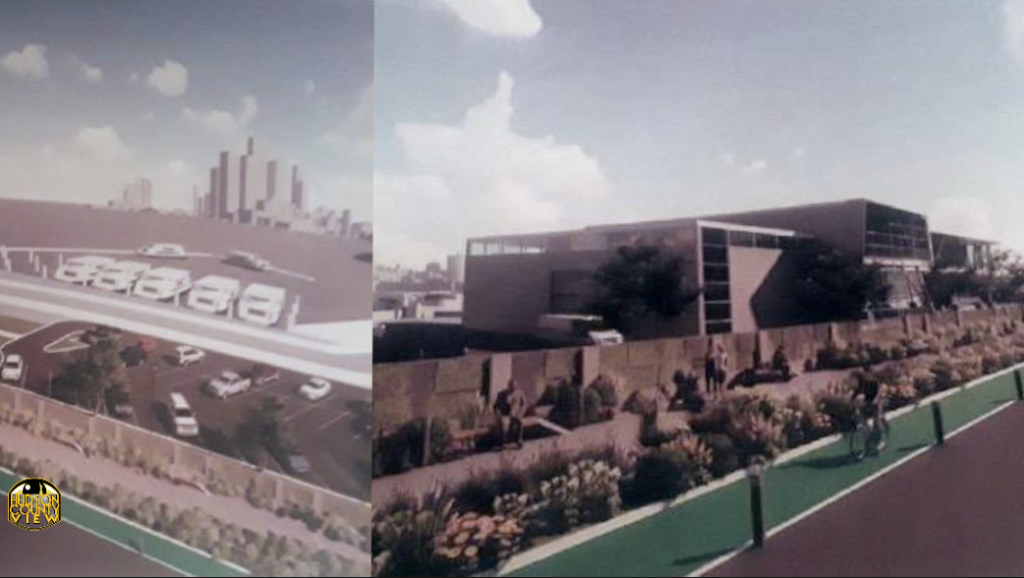 The renderings were first shown publicly during a meeting hosted by representatives from NY Waterway at the Hoboken Elks Lodge on Wednesday evening, according to three sources with knowledge of the situation who spoke under the condition of anonymity.

They depict a facility that looks fairly similar to the current setup that NY Waterway has at their Weehawken location, 4800 Avenue at Port Imperial.

A spokesman for NY Waterway said they were evicted from that property on March 29th, though a previous agreement allows them to continue to unload trucks on the walkway and bring cargo onto the dock.

The eviction came under heavy scrutiny last week after The Jersey Journal reported that city attorneys called the situation “a manufactured crisis” since a 2016 land agreement would have allowed NY Waterway development a new site in Weehawken.

Fund for a Better Waterfront Executive Director Ron Hine, who has been pushing for preserving Union Dry Dock to complete a contiguous waterfront park, voiced frustration with these latest developments.

“Hard to believe that the person who once owned 370 acres at the WNY/Weehawken waterfront now claims he has no land left to run his maintenance/refueling facility there. (He actually still owns 26 acres where he currently operates at Port Imperial Marina),” he exclaimed.

“If this ferry depot can be made to look beautiful put it in one of the many other sites deemed more appropriate, not in the middle of our waterfront park.”

Dating back to July, dozens of residents have objected to NY Waterway taking over Union Dry Dock, eventually prompting officials to discuss a study that indicated the Lackawanna Ferry Terminal would be a better suited location in November.

Less than a month later, the U.S. Army Corps of Engineers granted NY Waterway their first permit to proceed forward with moving their operation to Hoboken.

Despite this decision, many residents and advocates have remained undeterred in their position, with hundreds gathering for a march along the waterfront to oppose the project last month.