Five Union City police officers are suing Mayor/state Senator Brian Stack (D-33), dating back to March 2014, alleging that in order to get promoted they must first contribute to his civic association. 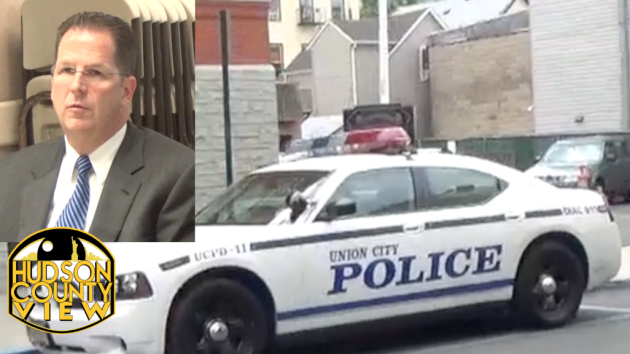 Joaquin Ruiz, the first officer to file suit in Hudson County Superior Court on March 4, 2014, claims that “Stack has created a political machine to foster a ‘pay to play’ culture in Hudson County with the primary purpose of promoting, protecting and maintaining” his power in Union City and the rest of the 33rd Legislative District.

Furthermore, “The Civic Association is the barometer by which Mayor Brian Stack measures and evaluates, in terms of financial donations, the loyalty and political patronage shown by individuals and companies for purposes  of conferring and providing government benefits and privileges,” the suit says.

Through his North Bergen attorney Louis Zayas, who is representing all five officers suing Stack and his civic association, Ruiz further states that the mayor/state Senator routinely rewards contributors with jobs and government contracts.

Although acknowledging that the civic association does have volunteer and civic efforts in the community, the lawsuit alleges that “the civic association’s main purpose for its existence is to promote, protect and maintain Mayor Stack’s political power in the Union City Police Department.”

According to the suit, Ruiz, took a sergeant’s exam on October 25, 2007 in hopes of getting promoted, ranking 15th on the promotion’s list after three other officers retired.

He alleges that another officer, “Sgt. Gonzalez,” asked him on behalf of Stack “to join him and the Brian Stack Civic Association,” however, Ruiz said he didn’t want to get involved in the politics of the police department.

Gonzalez responded that “he was making a mistake” by declining the invitation, which Ruiz took as a threat to his employment, another line in the suit states.

Although not claiming any instances of harassment after the fact, an “officer Lugo” approached him with an offer in November 2010, stating that he would be promoted to sergeant if he worked Stack’s re-election campaign for May 2011. Once again, Ruiz says he declined.

12 officers were promoted to sergeant in June 2011, which Ruiz was not a part of, and ended up directly at odds with Stack in March 2012 when someone who had put in retirement papers had a higher priority than him on the promotion list.

Despite the State Civil Service Commission allegedly telling Ruiz that Stack, also the city’s Department of Public Safety commissioner, was responsible for the promotion list certifications, the suit alleges that Stack said there was nothing he could do to help Ruiz.

Ruiz is alleging that his civil rights were violated, specifically that he was politically retaliated against and had his freedom of speech silenced.

Furthermore, Ruiz is asking for compensatory damages, punitive damages, attorney’s fees and costs of suit and such other and further relief as the court deems equitable and justified.

Police Officer Mark Julve’s suit, filed on February 5 of this year, makes identical charges about Stack, his civic association and the police department, but comes from a different perspective since he used to support Stack politically.

Julve admits to donating to Stack’s political campaign in 1998, as well as to getting involved with his Thanksgiving turkey drives and Christmas toy giveaways.

After making contributions to then-Mayor Rudy Garcia, as well as buying a $1,000 ticket to one of Stack’s political fundraisers, he was promoted to sergeant in 1999.

However, he stopped buying any tickets at all in 2011 after being separated from his wife, which he claims led to him being transferred to three different assignments.

Specifically, Julve alleges he was stuck at desk duty for nearly a year in one instance and then later getting low-balled a lower security detail rate with the rapid deployment force.

Although he was not high enough on the promotion list to earn the distinction of lieutenant on June 30, 2013, he claims that Stack only planned on promoting five officers. However, that number was upped to six to include Juan Loaces, a loyal stack supporter and contributor.

In the next year, Julve says he was hit with “sham disciplinary notices” and was essentially asked to perform lieutenant’s responsibilities of monitoring other sergeants on the midnight shift – which he wasn’t allowed to leave after three formal requests.

A copy of Julve’s lawsuit can be read here.

In the case filed by Willie Sierra on April 15, 2015, he specifically points to an IRS complaint filed by East Coast Private Associations Joe Blaettler, a former Union City Deputy Chief of Police who has been at odds with Stack for years.

The complaint mentions that the board members of Brian Stack Civic Association, which include Commissioners Lucio Fernandez and Maryury Marinetti, all have jobs either with City Hall or the Union City Board of Education. They are also all regular contributors to Stack’s political campaigns.

Admittedly donating and helping canvas during elections, Sierra was promoted to sergeant in 2004, but stopped getting involved in local politics after that, which apparently didn’t sit well with Stack.

In May 2005, Sierra alleges that Stack approached him and said “I heard you were talking (expletive) about me,” which the plaintiff denied. Stack responded by calling him “ungrateful” for his promotion.

Sierra also made the same charge Ruiz did about Loaces getting preferential treatment from Stack, evidenced in June 30, 2013. when he got promoted to lieutenant.

However, he adds that he should’ve still been promoted since one of the officers in line for the promotion got charged with driving while intoxicated, but instead, only five officers were promoted instead of six.

Sierra was promoted to lieutenant days after the lawsuit was filed, but still has not withdrawn his claim.

A copy of Sierra’s lawsuit can be read here.

Now a police lieutenant, Michael Figueroa filed his lawsuit on April 17, 2015, also highlighting Sierra’s qualms with the board members of the civic association.

Additionally, he alleges that in 2004, the lieutenant list wasn’t followed for the first time in city history when three non-political officers – including Figueroa were passed over in favor of a politically supportive one.

Figueroa was eventually promoted to lieutenant in 2006, but says he experienced a similar situation in May 21, 2011, where the department’s table of organization was amended to include three captains instead of four.

Figueroa was fourth in line to be promoted as captain before the action was taken, which he found odd since the department always operated with four captains.

He also cited issues with Loaces’ promotion, as well as being forced to work on the midnight shift, instead of the “power shift (7 p.m. until 3 a.m.)” or the night shift – which was being worked by a junior lieutenant.

A copy of Figueroa’s lawsuit can be read here.

Finally, Jorge Porres filed suit on July 21, 2015, making similar allegations to the other four officers, but upping the ante by alleging that “by soliciting bribes, extorting citizens and public employees, and otherwise engaging in conduct unbecoming of a public official,” which constitutes as “racketeering activity.”

He continues the strong allegations by stating that “Stack solicited 10 public employees for financial contributions” by taking them to his banker, having him approve the maximum bank loan amount he was able to authorize and then donated $2,300 to the political entities associated with Stack.

Furthermore, Porres, who retired earlier this year, says requests to engage in political activity were “relentless” between 2008 and 2015, citing one instance of getting passing over for the sergeant promotion in June 2011.

He says that around this time, the Union City Board of Commissioners passed a measure scaling back the number of sergeants that could be employed by the department.

Furthermore, he was allegedly told by another officer that he could still “kiss the ring and make nice” before the list expired, but refused, and was subsequently passed over again in 2011 and 2012.

Like the other plaintiffs, he says he was placed on the midnight shift in 2013 and requests to be reassigned to another shift were ignored.

A copy of Porres’ lawsuit can be read here.

Zayas and Stack did not immediately return calls seeking comment.

In the past week, Hoboken reports just 16 new cases of...