After voting against adding it to the agenda last time, an identical tally voted down Jersey City Councilman-at-Large Rolando Lavarro’s inclusionary zoning ordinance measure at a short yet intense 90-minute meeting last night. 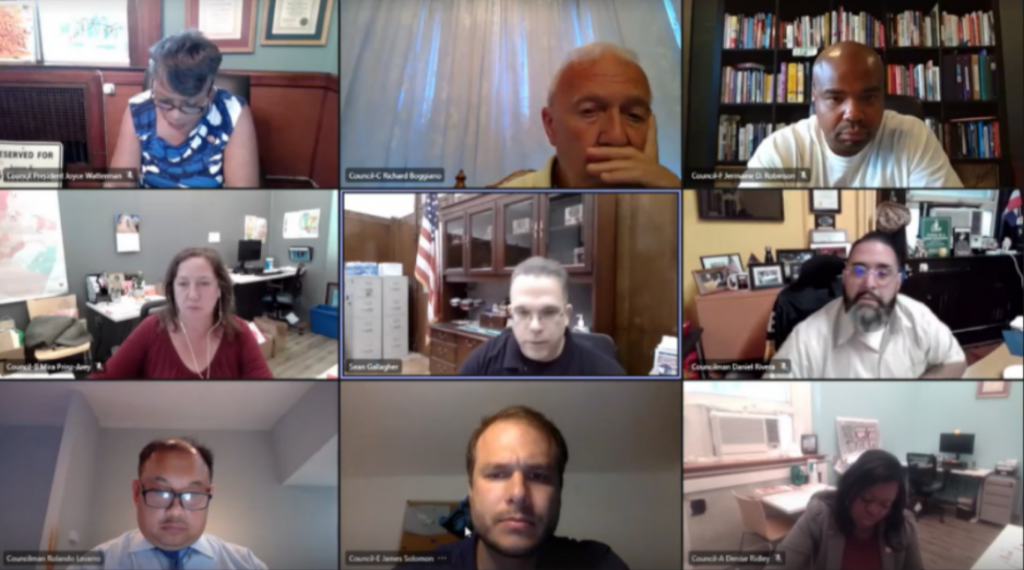 Ward E Councilman James Solomon and Ward B Councilwoman Mira Prinz-Arey joined Lavarro in voting for resolution, which required 20 percent affordable housing and no buyout provisions and would’ve been sent to the planning board for further review.

The other council members argued this would interrupt the planning division’s process of crafting a new affordable housing ordinance with the Fair Share Housing Center, who sued the city over the IZO the council approved in October and successfully had it overturned last month.

The council also voted 6-3 against Lavarro’s attempt to add the IZO resolution to their agenda at their September 9th meeting.

“My concerns are with inclusionary zoning, in general, is if you’re in real estate, you’re familiar with the practice called redlining,” began Ward A Councilwoman Denise Ridley, explaining that redlining is a discriminatory practice that bars financial services to people in certain areas.

“I have Ward A residents that come to me telling me they cannot get into the available, affordable housing. Residents coming right out of college are being denied, teachers, fire police can’t get into this affordable housing, and they’re not making enough to stay here in Jersey City. That’s a problem. We don’t set the standard for what those affordable incomes are. I wish we could.”

She also accused Lavarro of throwing a “hissy fit” on social media, in a post where he promoted the Ward A council debate hosted by Hudson Media Group.

“I just learned that the Ward A Councilwoman won’t vote for the Inclusionary Zoning Ordinance that the Council will vote on tomorrow night,” he wrote.

“75% of Ward A Jersey City renters are cost-burdened, meaning they pay way too much of their income on their rent. Greenville deserves an advocate who recognizes the gentrification tsunami that is washing over our City and will inevitably swamp Greenville.”

Ridley said that when Prinz-Arey started a Special Improvement District (SID) in Ward B, where he also lives, Lavarro called it gentrification.

She continued that he voted for his former employer, NJCU, to receive multiple tax abatements and started gentrification via the University Place project, which had no affordable housing requirements or community givebacks – exclaiming that a one-bedroom apartment there costs $2,575 a month.

“So Councilman Lavarro, you’ve been on council the longest, for the last 10 years, and over that time, there have been at least 140 abatements with little affordable housing or any givebacks. Councilman, don’t tell lies about me, and I won’t tell the truth about you,” she concluded.

Prinz-Arey then contended that there needs to be a meeting of the minds sooner than later so that the city has an IZO on the books again.

“This takes us right back to where we were in 2019 when we had two ordinances we were trying to reconcile in an ad hoc committee. We do need to have a real conversation about what the IZO is going to look like in Jersey City.”

She also noted that advocates pushed back against an ordinance Lavarro pushed for creating a 400 unit building that had 20 percent affordable housing.

“Nobody consulted me. No asked me my opinion on this, so I’m going to vote no,” Ward C Councilman Rich Boggiano said succinctly.

Ward D Councilman Yousef Saleh also voted no, indicating that he’d like to meet with Fair Share Housing members personally and discuss the housing needs of his constituents in the Heights.

Lavarro argued that because Boggiano was involved in the affordable housing discussions in 2019, it was disingenuous that he wasn’t familiar with what was happening.

“You’re entitled to your no vote and whatever reasons you want to make up to justify that no vote,” Lavarro said, also criticizing that Saleh talked about urgency yet still voted no.

At that point, Saleh further explained himself.

Saleh added that he supported Lavarro’s amendments to the IZO ordinance last year and agreed that stronger parameters were needed.

Lavarro wasn’t even close to done though, as he then responded in kind to Ridley.

“You were the only person on the city council who voted no on Bayfront. So now you want to claim that and claim that victory, that’s fine. I hope the Ward A residents recognize and understand that,” he began.

He also asserted that while he certainly voted for tax abatements, he voted for way less than Council President Joyce Watterman and Councilman-at-Large Daniel Rivera – who are running on Mayor Steven Fulop’s ticket, which also includes Ridley.

Finally, Rivera and Watterman weighed in on the situation.

“I’m 100 percent for affordable housing, always been. But I think we need to give everybody a chance regardless of how long the structure is going to take. This looks like we’re playing politics with people that really really do need affordable housing. Ya know, that’s unfortunate,” Rivera said.

“Even with the inclusionary zoning, the only way we can get it is if they [developers] come to redevelopment and ask for some type of up zone. We have to figure out how can we as a council get them to ask for something extra so people can get affordable housing. We said it has to go to planning. planning has to come up with an idea. So I’m trusting on what they say,” Watterman concluded.