The Jersey City Planning Board unanimously approved (9-0) the new Bayfront redevelopment site plan on the city’s west side at their January meeting. 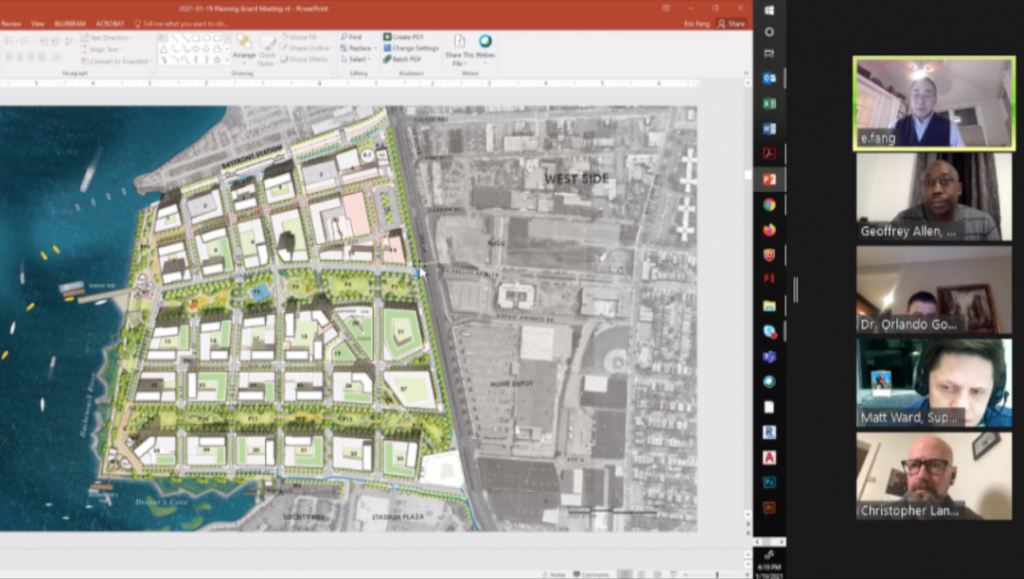 The meeting began with their annual reorganization, though the governing body decided to retain their current leadership via two separate unanimous vote: leaving Christopher Langston as chair and Orlando Gonzalez as vice chair.

He also noted that the city wants to make Bayfront, at the corner of Rt. 440 and Communipaw Ave, a new neighborhood and a transit hub.

The city council okayed roughly $170 million in bonding to purchase the land in October 2018 and announced the first phase of construction this past June.

The city initially developed a plan for the Bayfront in 2008, which was since been altered and modified into the current iteration.

The 100-acre site had been severely contaminated for several decades. However, in 2008, Jersey City reached a deal with the land owner, Honeywell, to to clean up chromium contamination.

“It can really be a great public gathering place,” Fang said, adding that the site could be “a new downtown destination for the entire west side.”

To make it a new downtown, Jersey City is working to extend the Hudson Bergen light rail to Bayfront. Also, they are collaborating with NJ Transit to build a new train station there.

Additionally, a recent add on calls for a K-8 school that would have the capacity for 400 students.

Included with 35 percent overall affordable housing would be a maximum requirement of 15 percent of the housing units to be priced for workforce housing.

Workforce housing is designed to be affordable and convenient for nearby workers, rather than the city as a whole.

“Is this project gonna be in phases? How does affordable housing fit in the phases?,” Commissioner Edward Torres asked.

Jersey City Senior Planner Matt Ward responded that every phase of construction will have to fulfill the requirement of 20 percent.

Furthermore, Urban Designer Liz Opper explained developers will likely want Low-Income Housing Tax Credits (LIHTC), which have sustainability requirements that have been imposed on the project.

Therefore, 20 percent of the roofs must be conducive to green energy like solar panels.

Jersey City is also seeking to improve traffic and pedestrian safety leading to the site since the area is right near Route 440.

In the current plan, trees separate the main boulevard from the heavy traffic of 440. Junctions will be created to allow for traffic flow into Bayfront.

“Jersey City is working with the State on Route 440 to make it more hospitable to the development … Certainly, in this area, we should be … slowing that traffic against the mixed-use,” Steven Lee, a landscape architect at the New York firm SWA/Balsey explained.

Along the waterfront, there will be space for a boathouse that will allow kayak and boating rentals. Perkins Eastman examined waterfront development projects in Washington D.C. and San Francisco to develop the plan.

The plan also assumes a ferry station will be viable, something that Hudson County is currently exploring, as HCV first reported.

“If we do get the ferry and a water taxi, would there be more parking?,”  Torres questioned.

“It is subject to change,” Ward answered, continuing that there is parking provided in the plan. “There will be street parking on the majority of these streets.”

To cope with climate change, there are also plans for coastal resiliency to mitigate the risk of storm surges.

“Parts of the bulkhead need to be restored and rebuilt,” Fang said. Specifically, they are seeking to protect strategic points around the beach to slow the waves down.

Langston asked how many spaces are created with the proposed diagonal parking versus standard parking.

“I’m really super proud I’m part of this planning board,” said Gonzalez before voting for the plan.

“I really do think the people of Jersey City … will be very proud when we start building on the west side at the waterfront,” Torres exclaimed before voting aye.

Editor’s note: This story was updated to reflect that the approved plan includes 35 percent affordable housing.