The Jersey City Planning Board reviewed the plans to allow several adult-use recreational cannabis dispensaries and facilities in the city for the first time at last night’s meeting, opting to vote at their next session on June 22nd. 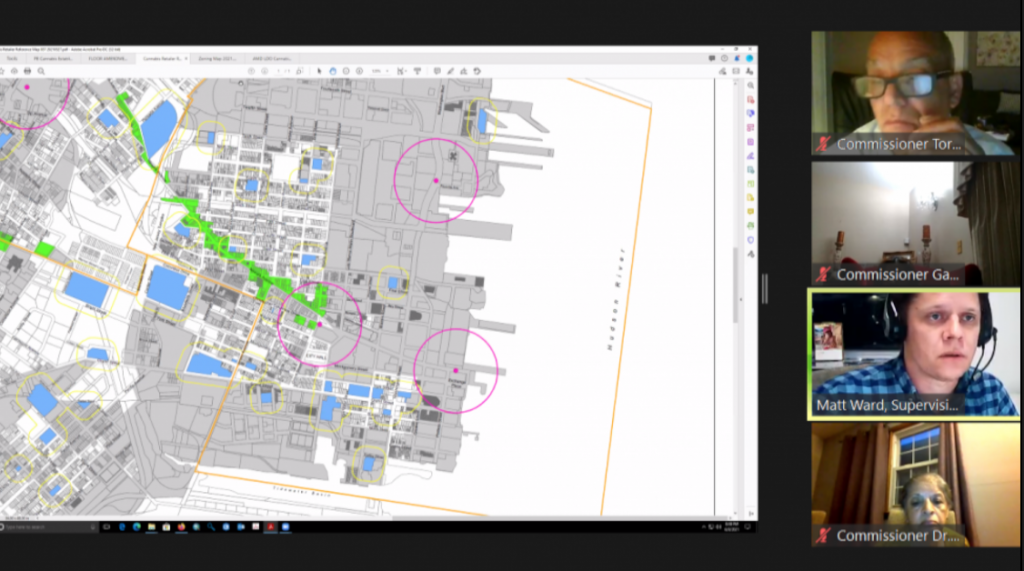 Jersey City Supervising Planner Matt Ward explained that there will be public comment and a vote on the plan at the board’s next meeting on June 22nd.

As long as the ordinance passes as expected, it will have a first reading at the July 14th city council meeting, then second reading will be heard at a special meeting Ward explained a special meeting so that the vote can be held before the statewide deadline to take action on August 21st.

“We want to devote as much time as possible to this. This is unprecedented here,” said Board Chair Christopher Langston.

Those who wish to have their voice heard are encouraged to send their comments to mward@jcnj.org and/or cityplanning@jcnj.org by June 17th.

Planning Board Attorney Santo Alampi noted that all towns must enact an ordinance by August 21st to manage cannabis policy in their towns for the next five years.

The municipalities that opt-in to cannabis can impose a two percent tax, which officials have previously suggested should go towards the public schools.

“Jersey City is opting out of cannabis consumption areas, a smoking lounge, that would have to be based at a dispensary,” Ward said, though noted that could change in the future.

The five classes of licenses that will potentially be allowed in Jersey City will be cultivation – which must occur indoors or in a greenhouse – manufacturing, distribution, dispensary, and retail.

Additionally, Ward stated they sought to prioritize entrepreneurship and equity, encourage competition, as well as balancing demand and oversaturation while writing the plan.

He also noted the microbusiness license help promotes the social justice goals they sought to advance since it will be easier for entrepreneurs with fewer resources to obtain.

For a microbusiness, the owners need to have lived in New Jersey for at least two years, 51 percent of staff need to live in Jersey City, and they can employ a maximum of 10 people in a space that is up to 2,500 square feet.

Furthermore, their applications will need to include a description of the applicant’s record of “social responsibility, philanthropy, and ties to the proposed host community,” according to the presentation before the board.

They also need to create a workforce development and job creation plan on their history of job creation and planned job creation, education, training and resources that will be available for employees, and any relevant certifications, and an optional diversity plan.

Beyond that, cannabis retailer licenses shall be permitted in several of the different commercial districts Jersey City has.

Dispensaries will be allowed around PATH stations, but with the limit to two per block and one must be a microbusiness. In other areas, there will be more distance, but there still could be a dispensary every two or three blocks in certain areas of the city according to Ward.

Ward said that might be difficult as they do not promote retail space in industrial districts which means the zoning regulations would need to be updated.

“I’m thinking about cannabis brewery type of situation,” Langston said. He described it as a place where manufacturing and selling could be done on the same premises, like a microbrewery.

Ward also noted that the dispensaries check IDs to ensure everyone is at least 21 years old.

In neighboring Hoboken, the municipal government is moving forward with retail cannabis businesses, while nearby Union City is pumping the brakes for now.

Jersey City cannabis board OKs 4 dispensaries, including one co-owned by...