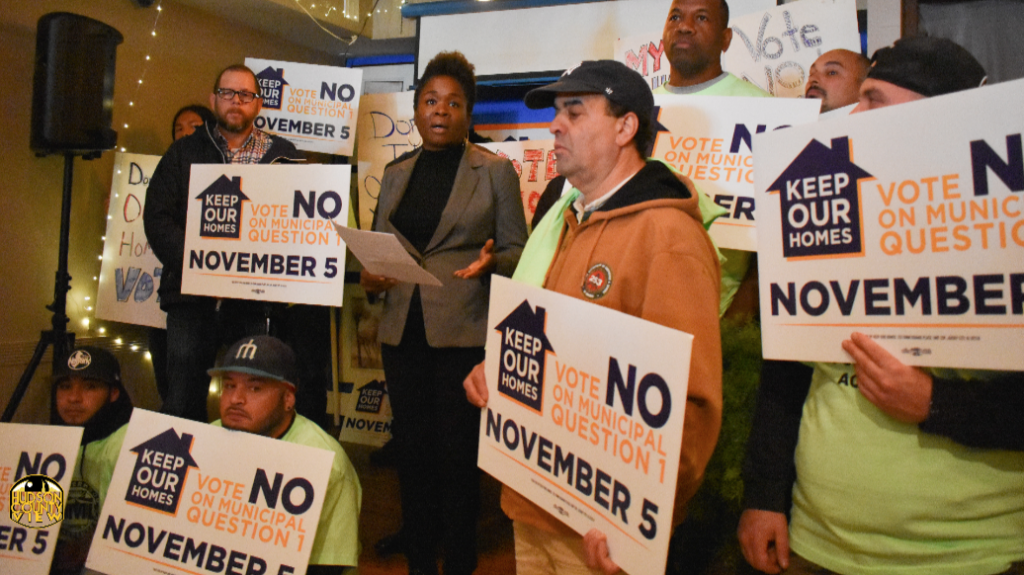 The Jersey City branch of the NAACP joined small business owners, Airbnb hosts and and members of the Keystone Mountain Lakes Regional Council of Carpenters Local 253 to rally against an ordinance up for a referendum that they say would take away short-term rental privileges.

Advocates for a no vote said today that the ordinance would strip rights away from property owners. Rev. Nathaniel Legay, president of the Jersey City NAACP, called it a “civil rights issue.”

“We are here to support those who want to be set free to do what they want to do with their personal property,” he said.

“Jersey City is a very economically unaffordable area to live, and there are people who are looking for more income because of the high increase in the cost of living.”

In 2015, Jersey City legalized short-term rentals, allowing property owners to rent out their homes to visitors.

However, in June the city council passed an ordinance creating certain restrictions, until a group backed by Airbnb, Keep Our Homes, garnered enough signatures to put it on the fall ballot.

It has been an explosive battle ever since, with a lot at stake for Airbnb and for the hotel industry. Millions of dollars have been pumped into the race in the form of advertisements and campaign flyers.

Advocates for a yes vote say unregulated short-rentals could create an affordable housing dilemma and diminish the housing stock in an area with some of the highest rents in the state.

Mayor Steven Fulop has been vocal in his opposition and has said the city “wonâ€™t be manipulated by their money.”

“We intend on winning November 5th for fair rules – despite Airbnb (money). We are organizing/working hard,” he tweeted.

Gov. Phil Murphy, state Senators Sandra Cunningham and Brian Stack, the JCEA, Jersey City Together, the Hudson County GOP and the Jersey City Democratic Organization are just a few of the many groups supporting a yes vote.

Not all are on the city’s side however.

Felicia Palmer, a resident who has been an Airbnb host since 2009, said today that she was “a living testimony to how earning money via Airbnb has provided a safety net for my family.”

Airbnb, according to company officials, created $40 million in economic activity in the city last year. Thousands of city residents use Airbnb to rent out their homes.

Legay later said that, if the ordinance is approved by the voters, that “African Americans and poor people will suffer, because those who are maybe out of work — they will not be able to exercise that right to have renter income, and will not have the income to pay their rent or their mortgages.”