A Jersey City man that was sentenced to 27 years in prison for a North Bergen carjacking and armed robbery back in 2016 will get a new trial after the appellate division ruled that “the trial court abused its discretion.”

” … We conclude the trial court abused its discretion by allowing the State to present Williams’s testimony without providing any report, especially after denying defense counsel an opportunity to learn the basis for Williams’s opinions at an immediate (New Jersey Rules of Evidence) 104 hearing, which did not, in itself, require a continuance beyond the length of the hearing that could have taken place that day,” Appellate Court Judges Douglas M. Fasciale, Scott J. Moynihan, and Stephanie Anne Mitterhoff ruled on Friday.

“As such, we are constrained to reverse and remand this matter for a new trial.”

Robert Warren, 27, of Jersey City, was sentenced to 27 years in prison back on February 1st, 2016 after being convicted of carjacking, armed burglary, weapons charges and three counts of aggravated assault in connection to a June 2nd, 2014 incident in North Bergen, according to the New Jersey Department of Corrections.

The state’s fingerprint witness, Irene Williams, testified that at least two of the prints at the crime scene were those of Warren, despite Warren’s counsel objecting since he had “no reports, conclusions, or findings from this witness.”

Additionally, counsel for the defendant was not able to examine the expert witness during a preliminary hearing.

The appellate court felt that this, along with other facts, should’ve disqualified the expert testimony from being considered by the jury.

“We also note that the trial court sustained defendant’s objection to Williams’s testimony that her subordinate found more points of comparison than she, but the court did not strike that testimony. It should have so the jury knew it could not consider that testimony in its deliberations.”

According to the NJ DOC, Warren has been incarcerated since February 19th, 2016. 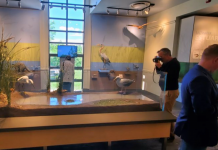 Police: Man busted for owing over $48k in EZPass tolls in...