Jersey City Mayor Steven Fulop recently met eight members of the Kakar family, who recently escaped Afghanistan and were reunited with their relative and city resident, Seema, a story which they detailed at a press conference this afternoon. 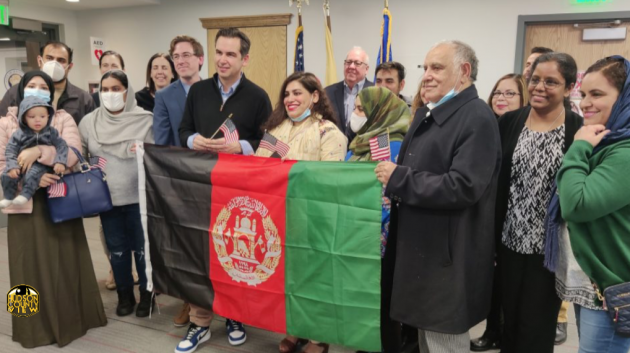 Seema was studying in the United States before Afghanistan fell to the Taliban and worked very hard to get her family out.

“Our Division of Immigrant Affairs prepared over 1,000 pages of federal petitions for the Kakar family and others,” explained Fulop.

“This is how Jersey City is changing the immigration narrative by providing services that welcome immigrants to strengthen our city and our nation.”

Within the petitions for her family were letters from the Taliban threatening beheadings as punishment for Seema’s American high school and college education.

“Green Card and citizenship programs, and this unique case of family reunification, engage and empower the immigrant communities that make up nearly half Jersey City,” noted Health and Human Services Director Stacey Flanagan.

As humanitarian parolees, the Kakar family may stay in the U.S. for two years, during which time they are seeking attorneys to help with asylum petitions and jobs.

Nearly all hold advanced degrees in medicine, nursing, and business, except baby Zaland, who was born two weeks before their evacuation of Kabul.

They had to flee from one province to another before leaving the country. The family had to travel through 17 checkpoints to get out of Afghanistan after leaving their home on the Pakistan border.

At each point, they were in danger of losing their lives if Taliban soldiers who interrogated them found out they had American connections. The family pretended they were going to a wedding as they prepared to flee.

“Nobody can image the trauma we went through,” said one sister who wished to remain anonymous.

“How did they decide if they wanted to stop you at the checkpoint?,” Fulop asked.

It was noted they inspected everyone and the men didn’t travel with their phones, which would have shown they were speaking with foreigners and would have likely killed them.

“Wow. Before the U.S. exited, it didn’t feel like that,” Fulop replied.

Division of Immigrant Affairs Director Mike McLean noted that previously under the U.S., there had been educational advances in Afghanistan.

Additionally, the family said they started trying to leave last August and it was only with help from the Rutgers Presbyterian Church in New York City Seema Kakar was able to get her family out of Afghanistan.

An affidavit of support for parolees was needed to bring them to the United States, noted McClean, and a woman who paid for a charter flight for them wanted to remain anonymous.

They left Afghanistan in early September and arrived in the U.S. in early October stayed in a make-shift refugee encampment of tents and rooms made from containers in the process.

They eventually flew into Philadelphia and then spent time at Fort Dix in South Jersey where Afghan refugees could stay after fleeing.

“This was like a Hail Mary pass,” McLean said, further stating that 40,000 people are seeking humanitarian parole, so the process is very competitive at the moment.

Seema Kakar’s brother, sister-in-law, and niece are still in Afghanistan. He couldn’t leave due to an injury and she is able to talk to her brother once a month through cousins, adding that it has been difficult to get him out of the hospital.

“The timing is not right,” Seema Kakar said.

“How difficult is it to get them out at this point?,” Fulop asked.

“It’s super difficult,” Seema Kakar replied, indicating that many organizations are not working with the Taliban and her family had to sneak out.

McLean said they needed their status upgraded from parolees to asylum seekers to ultimately secure a green card to stay in the United States.

“If they can’t achieve asylum, this horror story might continue,” he said.

The Kakar family is only one of the hundreds helped by resettlement agencies like Church World Service, whose Jersey City office is seeing record numbers of newcomers.

Seema Kakar lives in a group home where the Sisters of Saint Joseph of Peace shelter vulnerable immigrant women.

Her family reunification petitions were made possible by an individual benefactor who signed Affidavits of Support required by strict federal protocols.

Similar help is being provided to Ukrainian residents with families fleeing the Russian invasion and residents from Haiti, Latin America, Africa, and Asia.

In 2020, Jersey City became the first municipality in the nation accredited for offering free legal services to immigrants as part of the U.S. Department of Justice Recognition and Accreditation Program.

Following the event, Fulop’s office noted that he supports the Afghan Adjustment Act, which would create an orderly and expedient way for refugees like the Kakars to obtain lawful permanent residence and eventually become citizens.