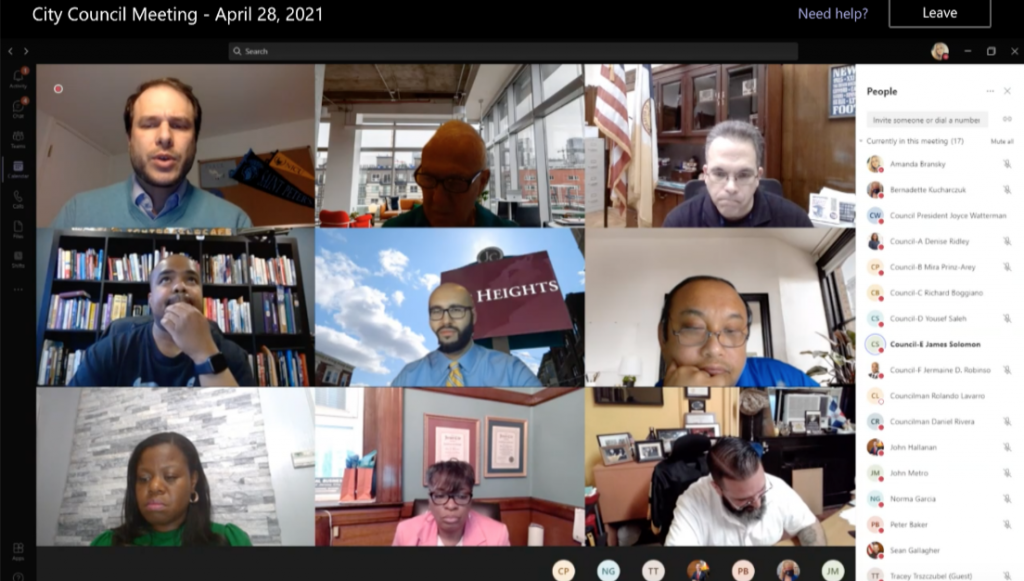 Several residents spoke in favor of the resolution, which was sponsored by Ward E Councilman James Solomon, during the public portion of the meeting.

Eleana Little, of the Progressive Democrats of Hudson County, said several colleges, including Rutgers University, put out a report that examines how storms will impact the state.

“They expect the average annual hurricane-related damages in New Jersey to increase by 1.3 to $3.1 billion and estimate half of that will be in Hudson County. So we will bear the brunt of that. Locally, we are very susceptible to the impacts of inaction on climate change.”

“It’s really important to me to do as much as we can to curb climate change,” resident Cara Walker added, recommending that the pension fund should invest in green energy.

Tina Weishaus, the co-chair of Divest NJ, said she was working with Solomon to promote the resolution urging the State to divest from fossil fuels.

“The burning of fossil fuels is the main driver of climate change,” Weishaus said at the meeting.

” … Continuing to invest in fossil fuels endangers the sustainability of our retirement funds as the global economy transitions to a low carbon future. The future can only be renewables if we are to survive,” she added in a statement today.

Members of the groups Solidarity and Mutual Aid Jersey City also joined the chorus of those speaking in favor of the measure.

“We need climate justice because if we continue with the way things are, we will reach a tipping point of no return, and our planet will be launched into an irreversible and self-reinforcing climate feedback loop,” Jenny Tang stated.

” … This runaway climate story, while scary isn’t written in stone. It is not inevitable. We already have the solutions we need,” she added.

According to Tang, since 1988, most carbon emissions can be traced to 100 fossil fuel-based corporations.

Council members Yousef Saleh, Daniel Rivera, Rolando Lavarro, and Joyce Watterman, the council president, all said they felt the resolution was a good idea, with Rivera and Watterman thanking Solomon for introducing it.

“I am proud that my resolution pushing for divesting New Jersey and Jersey City’s pension funds from fossil fuels passed with unanimous support last night. Jersey City is the first municipality in New Jersey to pass such a resolution as part of Divest New Jersey’s statewide campaign to put pressure on Trenton to take action,” Solomon said today.

“We must use every tool at our disposal to combat climate change as Jersey City is uniquely vulnerable to its effects.”

This morning, Chief Municipal Prosecutor Jake Hudnut, a declared challenger to Solomon running on Mayor Steven Fulop’s ticket, wrote off the resolution as having no real substance.

“ … The resolution sponsored by Councilman Solomon last night may look nice in a headline or a tweet, but in reality it’s nothing more than a symbolic piece of paper that fails to address the very real issues we are already facing from the impact of climate change,” he said in statement.

“Downtown Jersey City deserves a leader who will provide solutions to the issues we face, not someone who merely panders and attempts to generate headlines in an election year. James Solomon has had nearly four years to offer those kinds of solutions, but just like on so many other vital issues he has fallen woefully short. We need new leadership for our neighborhood that will offer bold solutions, not just talking points and hollow statements.”