The Jersey City Council voted to table an ordinance to install 72 new utility poles to support the deployment of 5G cellular technology, largely due to health concerns, even after a city attorney expressed that the FCC has deemed the towers safe. 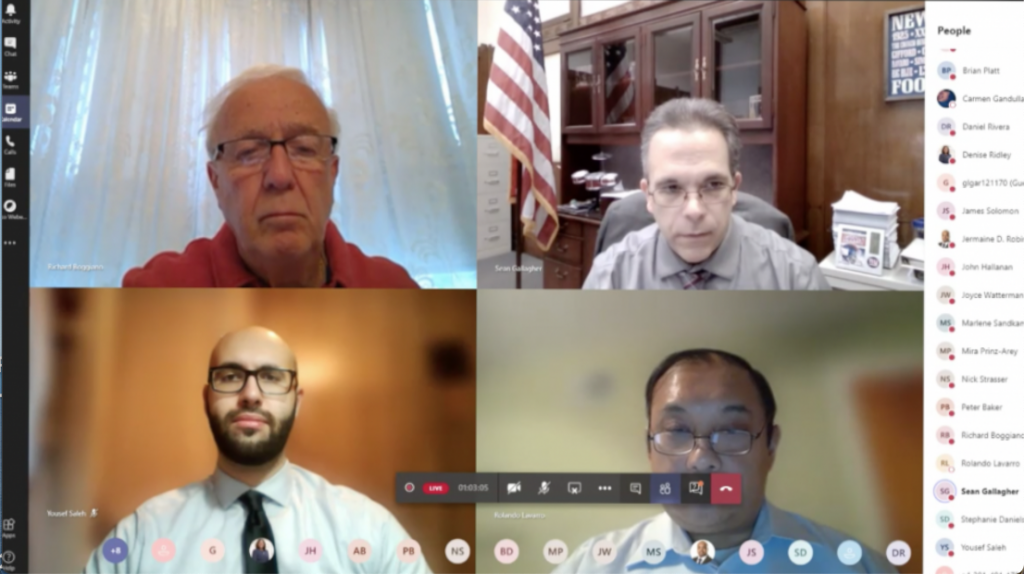 On Monday evening during the Council’s caucus meeting, Ward C Councilman Richard Boggiano was the most vocal when expressing concerns about a potential agreement between the city and a telecommunications vendor, Cross River Fiber, to install the new poles for 5G.

He said at the time that he was concerned about the radiation the poles may emit based on a Facebook post he saw.

While he faced considerable flak for his remarks, members of the public expressed similar concerns at yesterday’s council meeting – hosted via Microsoft Teams.

Lucy Shah is a registered nurse and the mother of two and she was against 5G utility poles being installed near her home.

“My children’s bedroom faces the street, and they can potentially be sleeping just a few feet away from a 5G tower,” she said during the public portion of the meeting.

“I just want to caution and hold up on the installation of these towers because just how we notify the community of CCTV camera installations and street paving, I just think we need to afford the public the same courtesy.”

Jersey City First Assistant Corporation Counsel Nick Strasser said that federal law states that “no state or local government may regulate the placement, construction and modification of personal wireless service facilities on the basis of the environmental effects of radio frequency emissions,” he began.

Still, Council President Joyce Watterman asked Strasser whether the council can send a resolution or similar document to the federal government to protest the FCC’s authority.

Strasser replied that the council always has the right to contact their federal lawmakers.

“It’s always within the Council’s jurisdiction to have a resolution to send to Congressmen Albio Sires and Donald Payne, the U.S. Senators from New Jersey to notify them of your frustration with the state of the federal law, you always have that ability,” Strasser said.

“However, it’s my obligation as a member of the law department to tell you what the state of the law is.”

That answer compelled Boggiano to say that maybe Mayor Steven should call Gov. Phil Murphy (D) and tell him that the people want more information on the matter and that the council isn’t satisfied with the FCC’s decision.

Ward F Councilman Jermaine Robinson wondered if the decision had already been made by the FCC regarding 5G safety, what is the point of voting on the ordinance.

Strasser noted that the city still has the ability to restrict some aspects of the deployment.

“What you can’t do is say it is on the basis of the emissions coming from the equipment, because the FCC has already reviewed that from a safety standpoint and said that it is safe. But the city does have the ability to do is to regulate the fees as it does in here or the engineering review, the legal review of the individual towers,” explained Strasser.

On Monday, the vendor agreed to provisions in the agreement with the city that it would send out notices to local residents before installing new equipment and/or new poles.

The tabling of the ordinance led Councilman-at-Large Daniel Rivera to question if the council, given the FCC’s authority, would open themselves up to a potential lawsuit if the vote is postponed again.

To which Strasser replied that there is.

“As I mentioned, federal law does prohibit using emissions from this hardware in your consideration of its approval, which is the jurisdiction of the FCC,” noted Strasser.

“In addition, any issues regarding placement of the hardware needs to be reasonable, and if a court should feel it is not being applied reasonably, the court could strike down your restrictions and force us to move forward with the project regardless.”

Nevertheless, the council voted unanimously (9-0) to table the ordinance until their May 20th meeting.

Teamsters Joint Council 73 endorses Fulop and his council slate in...