The Jersey City Board of Education introduced an $827,401,708 budget at last night’s meeting, with some trustees expressing frustration over not having seen the spending plan yet as the district awaits clarity on several funding details. 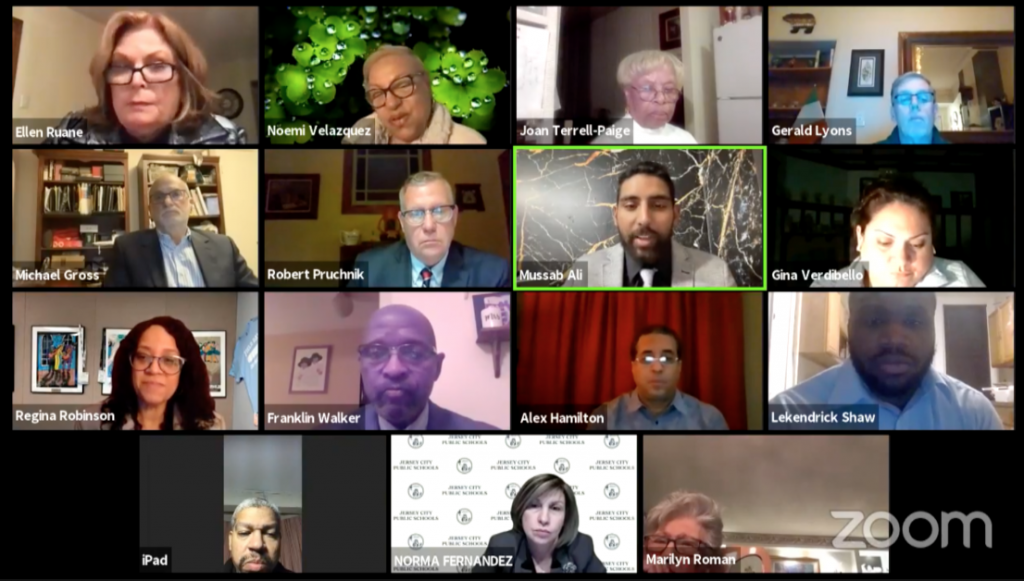 The school district’s current spending plan is anticipating a $153 million shortfall, which called for a $100 tax levy: which officials projected will cost households about $1,168 a year or $97 a month in tax increases.

“Yes, it seems excessive, but we’re making up for what we were doing in the past … There’s no time like the present,” stated Superintendent of Schools Franklin Walker, who sounded optimistic that additional revenue streams may become available prior to the vote on the final budget in April.

As it stands now, the JCPS receive about $255 million in state aid: $71 million less from the prior school year. Although their case against the state over their robust funding cuts is still pending, an outcome is not expected in the immediate future.

“We’re not actually fully done with our revenue numbers … This is not the final budget you will see in April,” Board President Mussab Ali explained.

Ali said they didn’t have copies of the full budget in front of them since some figures remain undetermined, such as how much money the BOE will receive from President Joe Biden’s (D) American Rescue Plan, which could provide a significant boost.

The City of Jersey City received $145,818,453.10 from the stimulus bill, U.S. Senators Bob Menendez and Cory Booker (both D-NJ) said when breaking down the figures per county and municipality last week.

“I’m going to vote on the most important thing I do on this board and the fact is that none of us have a hard copy of it in our hand: I’m not happy about that,” Trustee Alexander Hamilton exclaimed, later apologizing for getting emotional.

“We never even got a copy of it, we should have it right in front of us. I’m really disappointed in that,” Trustee Marilyn Roman added.

Ali responded that he didn’t have a copy either, continuing that the schools could receive anywhere from $70 to $90 million from the rescue plan, as well as up to $86 million from the city’s payroll tax – though only $65 million has been certified for the time being.

This was not welcome news for Roman, who expressed concerns ahead of Wednesday’s vote on the preliminary budget.

“None of the money is sustainable. The whole budget can fall apart at any time.”

She highlighted $35 million tat is being set aside for special projects including providing eyeglasses to students, expanding the bilingual program, and helping failing students by funding summer school.

The district also wants to operate new community schools, reduce classroom sizes, and buy textbooks in physical and digital formats for all grades.

Trustee Gerald Lyons said that some BOE employees might be receiving their unemployment benefits and salary simultaneously, which could be costing the district a lot.

Roman and Hamilton then explained why the feel it’s time to start getting the city involved.

“We should be writing a letter to the public and to the mayor and the council of this city, just putting ourselves right on the line and saying we have tried to cut in every way possible,” Roman said.

“They keep moving the goalposts on us all the time. It doesn’t matter what we do. We’re always the bad guys,” Hamilton added, saying he’s against another major tax increase.

“They’re going to lose their homes. Rent is going to go up. People can’t afford rent right now! That’s why Joe Biden had to pass this $1.9 trillion bill so people could even keep a roof over their heads or eat!”

It was also noted state legislators have not spoken to them, nor supported their efforts to secure more funding from Trenton.

“I don’t see the mayor coming to talk to us either. I’d like him to come and tell and tell he has no money for our children,” added Trustee Lorenzo Richardson.

“We can’t get a dollar from this guy. The reason the mayor didn’t want to deal with me as president – he didn’t want me to force his hand.”

Lyons also agreed that the board could use some more financial assistance from the city, pointing out that he knows people who sold their homes due to rising taxes and other costs.

All Hudson County school board must submit a preliminary budget to the interim county superintendent’s office by March 22nd, with the Jersey City BOE set to take their first vote on the matter tomorrow evening at 6 p.m.