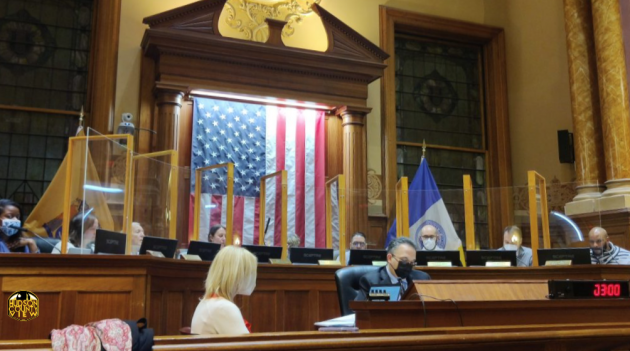 During the public hearing on the ordinance, Appleseed Public Law Center Executive Director Renee Steinhagen noted they have worked closely with the Morris Canal Community Development Corporation on the project.

“These amendments are pervaded with so-called community benefits that were negotiated by the former councilman and the JCRA (Jersey City Redevelopment Agency). They were not negotiated by stakeholders in the community who were supposed to have an active role in the redevelopment plan,” she said.

Steinhagen criticized the “trading off of so-called community benefits for affordability.”

“The tradeoffs for the community for affordable housing … was found unlawful by the court,” she argued, referring to when a superior court judge struck down the city’s inclusionary zoning ordinance in August.

“These amendments are inconsistent with the IZO. They only require five percent workforce housing and do not include 10 percent affordable housing,” Steinhagen said.

Residents also spoke to reiterate previous concerns, such as that the 17-story development is too tall for the neighborhood and that it does not have enough affordable housing.

“This is not what the community wants as far as the building in our area. These amendments were not brought to our community in a proper way,” stated Jerome Choice.

“Consider tabling this ordinance. The height is really offensive. 17 stories towering over two or three-story buildings. The developer has committed to working with the community. However, he has not committed to lowering the height,” Morris Canal Community Development Corporation President June Jones said.

“You are creating a loophole for developers,” she argued, also claiming the project goes against the city’s Master Plan.

Project developer Lou Mont, who Gilmore said he planned on meeting with in hopes of getting him to agree to delay the vote, had counsel for the MCM address the governing body.

“I wanted to clear up some of the misconceptions. We are here because a judge directed the Planning Board to conduct further hearings. We’re here on a very limited basis. We’re not voting on a project. We’re voting on what the judge has ordered to be done,” explained Ronald Shaljain.

“The planning board held an exhaustive hearing. You’re obligated by the court to make a determination. There is a misconception about community input.”

He also said Mont discussed the issue at different community meetings, including one Jones attended.

“I find it extremely funny when it comes to a developer providing things for a community … the thing they are least likely to give is affordable housing and that’s by design,” said Gary Spingarn, a Democratic committeeman in Ward E.

A brief discussion between Gilmore and Corporation Counsel Peter Baker indicated that his wouldn’t be final approval of the project, it would simply be approving the planning board’s recommendations going forward.

Baker also noted that the court did not provide any specific deadline for the project, therefore tabling it was still a viable option.

“He (Lou Mont) has met with the community. However, the community has said overwhelmingly time and time again that 17 stories is just too big,” Gilmore stated.

“We’re building a public safety building on MLK at 12 stories. That thing is huge. He’s willing to listen to the community. I want to take him at face value. I’m looking to table this and engage in extensive conversations.”

Business Administrator John Metro reiterated Baker’s comments that they were voting on a narrow scope of the project.

“This is a technicality,” he said.

“The remand was for the limited purpose for the planning board stating for the record how it is consistent with the process. We are bound by the court to consider the amendments as they were adopted in 2020,” Baker replied.

He continued that the current IZO, approved in December and that requires at least 10 percent affordable housing, could not be retroactively enforced.

Ward A Councilwoman Denise Ridley asked how large the designated redevelopment zone is, prompting Jones to call out from the crowd and exclaim that the the council didn’t know what they’re supposed to be voting on.

Baker replied that it only included that small area, prompting Gilmore to ask if it would set a precedent for further development.

“Not outside the redevelopment zone,” Baker said.

“It’s just so problematic. The community has spoken up extensively with regards to that. And the developer is on record willing to work with the community,” Gilmore noted.

“I’m requesting we table this to make sure we put the best product on the site.”

Metro said they’re just voting on a clarification and the project was already approved by the council, but Gilmore still made a motion to table the ordinance.

“I think there needs to be a conversation on what the community considers community giveback. I think there is wiggle room here. I say we should go back to the table … about possibly increasing affordability,” Ridley, who would oversee the project as long as the municipal redistricting maps hold, said.

Additionally, she noted that is not the issue that caused the project to head to court, as well as that the planning board still needs to vote on it so she voted no on tabling.

“I see what is happening … the whole Ward C with all these big buildings knocking down one or two-family homes, destroying communities. I think one you have one in there, it’s the start of the destruction,” Boggiano said before voting aye.

Saleh voted against tabling, saying they could only address narrow questions, also pointing out that Gilmore and Ridley are in talks with the developer.

Ward E Councilman James Solomon intimated they should seek further clarification on if the IZO applies, as well as that there was nothing to be lost by delaying the vote.

“I think there’s legal disagreement on whether the IZO applies. There’s no harm in tabling. We should table this and allow for more community conversation and collaboration.”

Ultimately, Ward B Councilwoman Mira Prinz-Arey, Boggiano, Solomon, Gilmore, and Councilwoman-at-Large Amy DeGise voted yes to table, allowing it to pass 5-4, a decision that was applauded by the crowd on hand.