The Jersey City Council considered amending some of their local cannabis rules and regulations yesterday at their first in person caucus meeting since the pandemic began. 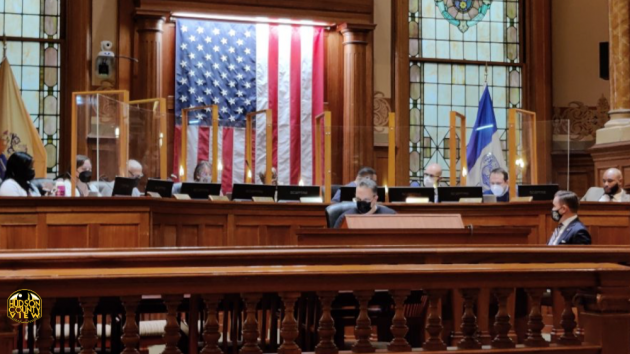 Early on, City Clerk Sean Gallagher noted the meeting was held in council chambers as opposed to the caucus room so that social distancing would still be possible.

Council President Joyce Watterman said if the COVID-19 numbers continued to rise, they would revert to remote meetings.

Corporation Counsel Peter Baker said there were a couple concerns related to the legal cannabis ordinance approved back in August.

For example, he said Watterman wants the board to update the council on a quarterly basis with a written report on the applicants who have applied, sorted by race, nationality, gender, residency, and the location of the proposed business.

“We have instituted a follow-up requirement in the interest of ensuring nothing has changed, the circumstances haven’t changed around the applicant,” he explained.

Baker said they also want to expand the Jersey City Cannabis Control Board (CCB) from three to five members.

The ordinance noted the council president is empowered to appoint one of the new members and the mayor can appoint the fifth one without the consent of the council, while the council must consent to the appointment of the initial three.

Baker explained applicants must first gain local approval before applying for a license to operate a cannabis business with the New Jersey Cannabis Regulatory Commission on the state level.

Ward D Councilman Yousef Saleh noted the application to apply for a cannabis license is quite lengthy.

He noted applicants have complained to him the application is similar to what is required when constructing a skyscraper such as requiring the expertise of a surveyor, a civil engineer, and a traffic plan.

“When it comes to retail, or if you’re doing a social equity applicant, I don’t understand why you would need all those items. I think the application itself needs to be tailored towards cannabis versus the general application,” Saleh stated.

“It really sets up a lot of hurdles for social equity applicants.”

Baker said he could set a meeting to address such concerns, prompting Saleh to ask about the application process.

Baker said applicants need to meet basic requirements, including ensuring they’re not too close to a daycare or a pre-school.

He noted there might be problems with “any number of factors. We just want to make sure we get a final look before it’s signed, sealed, and delivered.”

Watterman confirmed they would have to go before the CCB twice.

“What’s the second process when it comes back to us?,” Ward F Councilman Frank “Educational” Gilmore asked.

Baker said applicants approved by the CRC must submit to CCB for final review to ensure compliance and nothing has changed with respect to their application, like a source of funding falling through.

He explained that within 60 days of receiving the application back from the CRC, they would make a decision.

“It gives us a little more leverage,” Business Administrator John Metro noted, adding it would give them time if their neighborhood where they want to be based has issues with a cannabis establishment.

“The impact on the community is a large factor. There will be solicitation of community comments,” Baker added.

Gilmore asked what would happen if a daycare happened to go up in the interim between an application’s initial approval by the CCB and final approval from the CRC.

Metro said that was why they want to review applications twice to ensure compliance with rules.

Further, Baker noted the planning and zoning boards would track applications to ensure a public school or private pre-school or daycare does not open nearby.

Watterman was concerned if a school had popped up and it hurt the applicants.

“Where will that leave them? That could be a problem especially for micro-businesses,” she noted.

Baker said the city could flag it and work with the applicant under those unique circumstances.

“Is there a way to prioritize that we could the social equity applicant over let’s say, multi-state operators? I don’t see anything specific saying we’re going to do that,” questioned Saleh.

“When it comes to the identities and percentage of owners, I wanted to be even more specific … I don’t want to just to see the shell company for the LLC name. I want to see who’s running the LLC,” he said.

Baker said he would need to check the full ordinance on that.

“It’s something to be mindful of,” he said.