The Jersey City Council introduced a new plan to update their traffic control manual so that off-duty local police officers can regain the opportunity to direct traffic at construction sites, eight months after a different plan was denounced by one of their unions. 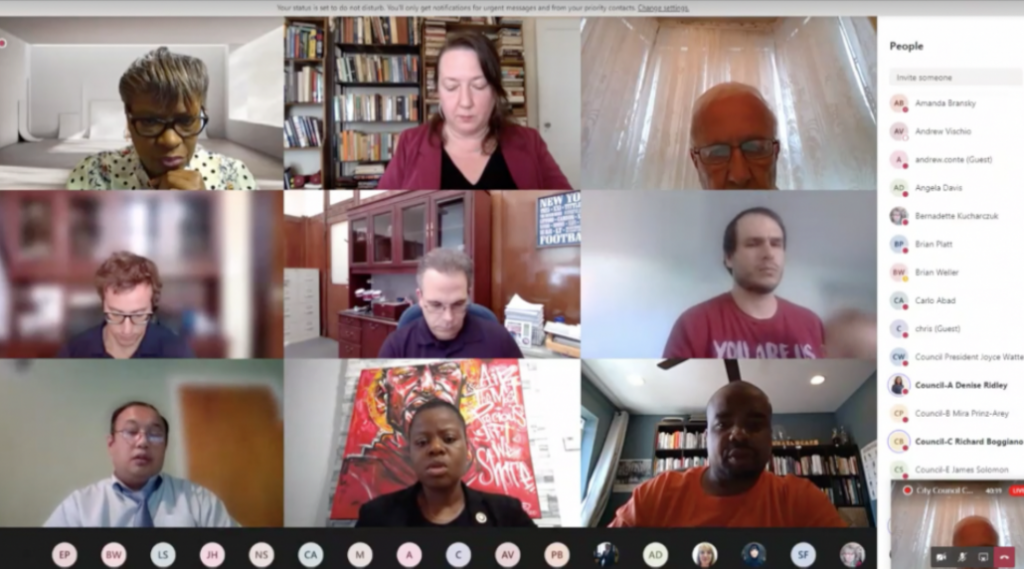 Currently the New Jersey State Police are manually directing traffic at signalized intersections within city limits, but should the ordinance for a new traffic control manual pass on second reading, Jersey City police officers will regain those details.

“It’s important to understand that once we, if this goes through and this manual passes via our votes, that it’s very clear that with respect to traffic, traffic construction jobs, it’s very clear that the state police will no longer be in our city,” Councilman-at-Large Daniel Rivera said at yesterday’s virtual caucus meeting.

“Those jobs will go strictly to our Jersey City police officers and flagmen … we need to be very, very clear with that.”

However, a judge dismissed the suit in April, ruling that the city had properly exercised their authority.

Nevertheless, Jersey City POBA President Carmine Disbrow said he was pleased that the city’s elected officials are willing to work with them on this issue.

“While there is more work to be done, we are glad that Mayor Fulop and the city council are continuing to engage in this conversation with us.”

Pointing to the ongoing battle with COVID-19, as well as the numerous protests over George Floyd’s death that have taken place in the past week, Disbrow added that “ultimately we share the same goal which is to protect the residents we serve, and keep our city and officers safe.”

Back at the council caucus, Ward F Councilman Jermaine Robinson expressed concern that the language within the 2020 edition of the manual did not make it explicitly clear that flagmen and women would also have an equal opportunity for traffic management.

He’s concerned because many of his constituents have been given second life chances to be able to work as flagmen and women.

“I want to make sure that the people that are in our community that really have been given a second chance at life to be earning some much needed income coming in for their families … I don’t want [them] to lose their positions,” said Robinson.

Rivera was quick to note that he worked with fellow council members Richard Boggiano and Mira Prinz-Arey to ensure that there would be no layoffs, which he asked Business Administrator Brian Platt to confirm for the record.

Platt said that only Jersey City police officers will be authorized to conduct manual control of a signalized intersection, while in all other instances it’ll be up to the discretion of Public Safety Director James Shea.

“In general, the approach will be flagmen are going to be used if it’s just a regular site that doesn’t have a signalized intersection just because, with full transparency, it’s a lower cost to the contractor and to the residents who may need this sort of traffic control,” said Platt.

While John Hallanan, who worked in the law department to help craft the new manual and now serves as the city’s deputy clerk, echoed what Platt said, Robinson insisted that his question wasn’t really answered.

Hallanan then responded that the only place where police are mandatory are signalized intersections, which is pursuant to New Jersey Statute Title 39-Motor Vehicles and Traffic Regulation.

“Either way, the only way that police officers have to be employed is at signalized intersections, everywhere flagmen are certainly being used and will continue to be used,” explained Hallanan.

Still, Robinson felt the language was still being left a bit too ambiguous.

“I’ve heard ‘should,’ I’ve heard ‘may.’ I’m just really concerned that we don’t lose our flag people. A lot of the people who are flag people are from the south side and this is their second chance opportunity [at employment],” Robinson indicated.

“The language speaks for itself. Like I said, the manual is very clear where police must be used and makes it very clear that flag people can be used in all other situations.”

The new ordinance will be up for discussion on first reading at the city council’s next meeting, scheduled for tomorrow evening at 6 p.m., hosted virtually via Microsoft Teams.