The Jersey City Council discussed the cannabis licensing process during their caucus meeting in preparation for a special planning board meeting next week. 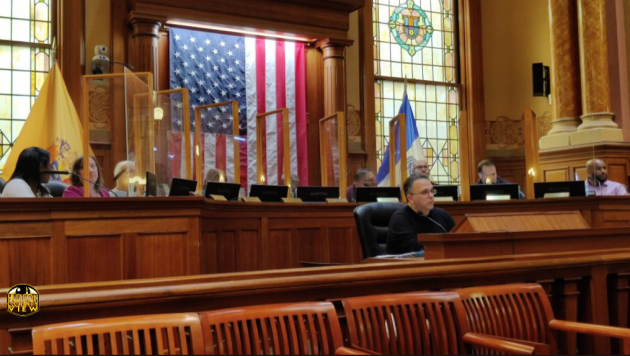 25 cannabis license applicants are expected to have the support of the city council via resolution at Wednesday’s meeting so they can apply to open a store or dispensary with the New Jersey Cannabis Regulatory Commission (NJCRC).

The state portal to apply for a cannabis dispensary license opened last Tuesday.

Council President Joyce Watterman said yesterday that the list was incomplete and more license applicants need to be added.

“How did folks get on the list?,” Ward E Councilman James Solomon asked.

An attorney from the law department said that the city’s Division of Commerce sent them applications.

“I don’t know what we’re telling applicants. If you want a letter, an offer, or action of local support, what are you supposed to do? I don’t think all the applicants are aware of that. I don’t know anything about these applicants,” Solomon explained.

He noted they want the businesses to be socially conscious, hire locally, and be community-oriented.

“It’s new for all of us. I know people have called me. Aren’t they supposed to come back to us? This is a resolution they need to submit with the state, and we just give them some type of temporary approval. Conditional approval, that’s the word, correct?,” Watterman asked.

Conditional cannabis license applicants can apply for a license from the state without having obtained a city council resolution endorsement.

Once approved by the state, they must secure municipal approval. Jersey City has set up a local Cannabis Control Board to review cannabis license applications.

“The board is the one that’s supposed to really oversee these apps to see they’re complying and giving back to the community in some way. That’s why I think we need the board’s approval and then to us. It seems like it would work that way,” the council president added.

“The council trusts and knows it’s vetted. And because Planning vetted, it goes back to us.”

“Can we get something in writing from Commerce (Department) explaining what the process is? Also, if there were people, I guess who applied and didn’t make the list, who they were and why didn’t they?” Ward A Councilwoman Denise Ridley asked.

“Is this something the state would like to see? It’s essentially saying that these entities were vetted and will provide community good,” chimed in Ward F Councilman Frank “Educational” Gilmore.

In a similar vein, Ward B Councilwoman Mira Prinz-Arey asked for an outline of the cannabis licensing process. Shortly thereafter, Watterman asked if they could withdraw the resolution.

Business Administrator John Metro said they did not want a delay to negatively impact business owners and said he would provide clarification on the process.

“We don’t want to hold any applicants hostage, so to speak,” Metro said.

“I don’t even know the addresses for these different retailers. If we had more information, the community benefits, the ownership, that would really help our decision. They should also speak in front of the council,” Ward D Councilman Yousef Saleh said.

“I don’t want to go that far,” Watterman replying.

“Could you see if delaying this would negatively impact their application with the state?,” Saleh asked.

Watterman said the Cannabis Control Board should review applications before applicants seek a resolution from the council.

“Once we understand the process, we’ll know what to do. It’s not holding up nothing because the state just released the application March 15th. We’re in good timing. I guarantee you Jersey City will be ahead of everyone,” she said.

Saleh said they want to see conditional license applicants succeed. He also noted the need for cannabis company applicants to become familiar with the councilperson that represents the neighborhood in which they are trying to establish their business.

Last week, Mayor Steven Fulop tweeted that the city had 12 local cannabis applications that would be heard at a special planning board meeting on March 28th.

“Important: We have 12 local cannabis applications for various aspects of the supply chain being heard for locations in #JerseyCity at a special Planning Board meeting on 3/28. I was an early supporter of legalization + we won’t put artificial obstacles around success/NIMBY”