The Jersey City Council debated the merits of Ward E Councilman James Solomon’s proposal to tighten up the budget by requiring overtime and audit reports from each department at yesterday’s caucus meeting. 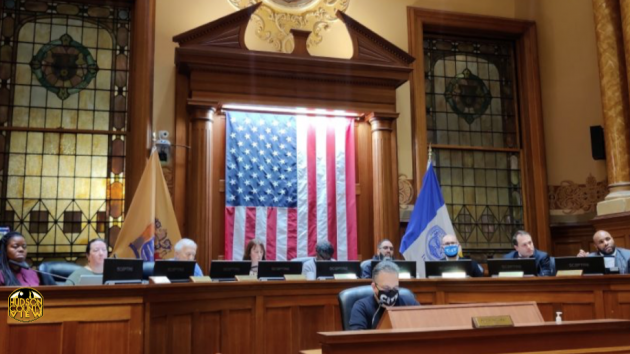 “It was an attempt to … prevent one of the mistakes in last year’s budget,” he began

Solomon, who voted no on last year’s $724.8 million budget that came with an over $1,000 tax increase per household, has previously explained that the municipal spending plan had a $36 million cash deficit, overtime pay for the department of public works and police department, and slashing the “Community Crisis Program” by 75 percent.

“I think that’s a good idea. I do want to know more about the overtime reports. It can be a lot of work,” Ward B Councilwoman Mira Prinz-Arey said. “Who would be responsible for the reports?”

“I’m amendable to any language changes. The goal is to identify if there’s overspending on overtime. It’s simply a tracking mechanism,” Solomon replied.

Prinz-Arey followed up by asking who would be collecting, and then disseminating the information, to which Solomon answered that would be up to the council administrator.

The councilwoman responded by questioning if the council administrator had been consulted since this could be a difficult task.

“It burdens the department heads. I think it would be simpler for payroll to give us a report,” added Councilwoman-at-Large Amy DeGise.

“All of this information is publicly available if you fill out an OPRA (Open Public Request Act) request. We should track this. The power of the purse comes from us. If we’re not tracking it, we’re going to end up in the same situation as last year,” Ward D Councilman Yousef Saleh chimed in.

Solomon again reiterated that he was open to make changes to the ordinance, which is up for first reading on Wednesday, as well as why he feels local legislation is needed at this time.

“I welcome making changes. The core is making sure on a monthly basis, we are appraised of spending. We’ve had five straight years of over-expenditure. I’ll spend the next 48 hours working with council members.”

Councilman-at-Large Daniel Rivera asked if Solomon had a specific department in mind when he drafted this, acknowledging that the Public Safety Department receives a lot of overtime.

He also noted that certain communities request officers to be posted up at specific intersections regularly.

“That power has been taken away from us and presented as a finished project,” Solomon added.

Rivera said many officers make a good deal of overtime at parades and similar festivals.

“We have a lot of that budgeted in. This is just transparency on the numbers,” the downtown councilman also stated.

Ward C Councilman Rich Boggiano, a retired police detective, said he’d prefer a closed session on this matter since he had a lot he’d like to say on it, but not publicly.

“When the finance or fiscal officer or director starts meeting with the departments, one of us should have been at the table at the beginning. We’re not at the table. We’re always at the table in the middle or the end.”

Solomon indicated that they could amend the specific overtime provision before the first reading passage on Wednesday.

“I don’t think this is a bad idea. We really [should] think through the nuts and bolts of it. It needs more time to marinate,” Prinz-Arey stated.

Rivera agreed, noting that he didn’t want the police department to feel like they’re under attack.

“We’re trying to cook a meal with not all the ingredients. Let’s make sure we have everything in place. We can definitely discuss it. You don’t want to keep knocking the morale of the police department,” he added.

Boggiano pointed that in said the town of Scotch Plains in Union County, the starting salary for a new police officer is $67,000, compared to $40,000 a year in Jersey City.

“If that’s the case, we should increase their salary. We should be looking at all the departments. After last year, the people want answers. People want action,” Saleh asserted.

Prinz-Arey said she has worked in compliance and had concerns about execution, to which Saleh said he had also previously worked compliant at a Fortune 100 company.

“They just want to be transparent. It’s a question of how we get to that point. If it has to be closed session, then we do that. Let’s have the discussion. If we can’t come to an agreement, he’ll remove … the overtime provision,” Watterman stated.

“There are a limited class of topics that can be the subject of a closed session. The default is meetings of the council are held in full open session,” interjected Corporation Counsel Peter Baker said, also noting that all votes had to take place in public.

Watterman referred to the council as “the stewards of this budget” and therefore did not want to be responsible for giving out incorrect information.

In response, Baker said he could work with the council offline, while Solomon pledged to do the same to find overtime language that works for everyone.