The Jersey City Council approved resolutions supporting the SPEAK OUT Act before Congress, along with giving the green light for two cannabis dispensaries. 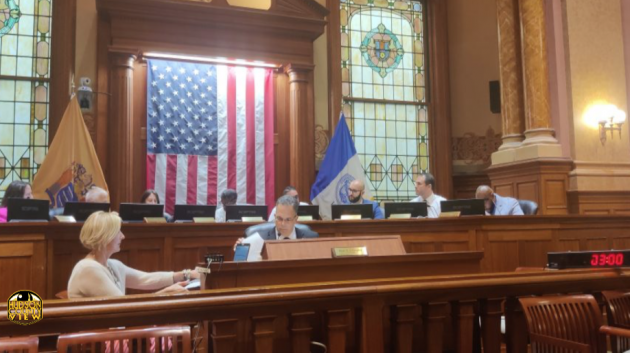 The Speak Out Act would prevent employers from imposing mandatory non-disclosure agreements (NDA) on employees who have suffered sexual harassment and assault and who subsequently cannot warn others.

“No one should ever be silenced from telling their story by a mandatory NDA. Long before my own assault story became public, I asked for advice. When I went to Julie Roginsky, a former senior advisor on the Murphy campaign, I didn’t know what she had seen,” Katie Brennan, who helped draft the local legislation with Ward E Councilman James Solomon.

“She wasn’t legally allowed to tell me. Her NDA prevented me from telling me that I wasn’t alone, prevented her from telling me that she warned the governor about the toxic environment for female workers on his campaign. The NDA she signed upon employment was so onerous that she could not even confide in me that it existed at all. NDAs hurt survivors.”

Brennan, the former chief of staff at the New Jersey Housing and Mortgage Finance Agency, received a $1 million settlement from the state in May 2020.

“When I spoke out publicly, the State of New Jersey, where I worked at the time, sent me a notice that my complaint was under investigation, and it included a stringent NDA warning me that I could face termination for disclosing anything more to anyone about the circumstance of my assault,” she explained.

Brennan also noted that the SPEAK OUT Act has passed both the House and Senate Judiciary Committees, though is yet to receive a vote in each chambers.

“This bipartisan legislation bans the use of workplaces NDA that prevent survivors and witnesses of sexual harassment and assault from speaking about their experiences,” Brennan said.

“This bill was inspired by Julie and I’s experience. The SPEAK OUT Act allows survivors of sexual harassment and assault to finally share their stories with friends and families. One in three employees in the U.S. has an NDA that would prevent them from doing so. It’s an important step in holding workplace predators accountable.”

Ward D Councilman Yousef Saleh and Solomon both commended her for coming forward and being a fierce advocate.

“With the NDA, it doesn’t really address the behavior behind the scenes. This will leave them with nowhere to hide,” Saleh noted.

“Thank you for pushing for real struct change that will make a difference in literally tens of thousands of lives,” Solomon added.

Councilwoman-at-Large Amy DeGise added that she hoped this would help encourage Congress “to act and champion people who have been silent for so long.”

The Jersey City Council also approved measures for the Leaf Joint Dispensary and the controversial Medusa Dispensary to operate.

Medusa, owned by local businessman Haytham Elgawly, is seeking to open a consumption lounge once the N.J. Cannabis Regulatory Commission (CRC) releases rules regarding their use.

St. Peter’s University and Hudson Catholic High School are opposed to the project and have filed a lawsuit in an attempt to halt the business.

“I want to Congratulate Haytham. You’re the exact kind of person who should stand to profit from the legalization of cannabis,” Saleh said.

Unlike the prior two meetings, this session ended in less than an hour, with residents not opting to call for DeGise’s resignation for a third time – instead making their voices heard at the Liberty House, where Craig Guy was launching his bid for county executive.