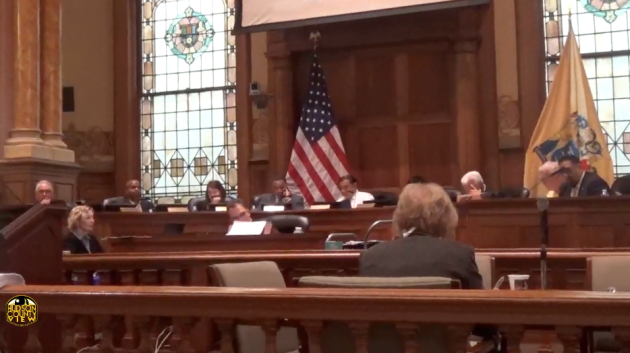 The ordinance requires developers, as a condition of a redevelopment plan, to maintain quarterly updates on available units, begin a waiting list for residents in the affordable housing income bracket and keeping record of the developer’s marketing plan – which will be reviewed by the city.

While the public was generally enthusiastic, many questioned whether or not the redevelopment plan compliments the lack of affordable housing for current residents.

Ward B Councilman Chris Gadsden also noted how the ordinance touches base on future developments, but doesn’t mention any existing housing accommodations.

“I like this ordinance, but it doesn’t do anything for the supply of housing that is currently still available out there in the market. It’s talking about future projects … Moving forward, we have to do more with the existing housing stock and get Jersey City residents into that,” said Gadsden.

Yvonne Balcer, a longtime resident and outspoken critic of the Mayor Steven Fulop administration, spoke on how uninformative the local housing authority is with Jersey City residents.

On the contrary, many aware of the low-income housing benefits are non-Jersey City residents, according to Balcer.

“…When I taught in New York, I had students who lived in the Bronx given apartments in Newport because Newport only advertised in the New York Post. So therefore, you’re not going to have any Jersey City residents applying,” said Balcer.

The city plans to monitor all units in order for Jersey City residents, making no more than $48,000 per year, to gain priority over the affordable housing.

In the upcoming years, the city expects hundreds of low-cost units, many coming from a tax exemption for two developments on Marin Boulevard and a third building on Columbus Drive.

While applauding the city, Balcer also recommended consideration to small home owners who are paying taxes for affordable housing, saying “you have to address all the people in the city.”

Councilmen Daniel Rivera and Jermaine Robinson introduced the ordinance last month, while the city announced last week that the housing authority opened their Section 8 voucher program for the first time in 15 years.

After Murphy ‘reiterates that golf courses are closed,’ Skyway decides to shut down