The Jersey City Council approved a $515,200 contract for 800 new Class B police uniforms at last night’s meeting in a 7-1 vote where some electeds expressed dismay over the process. 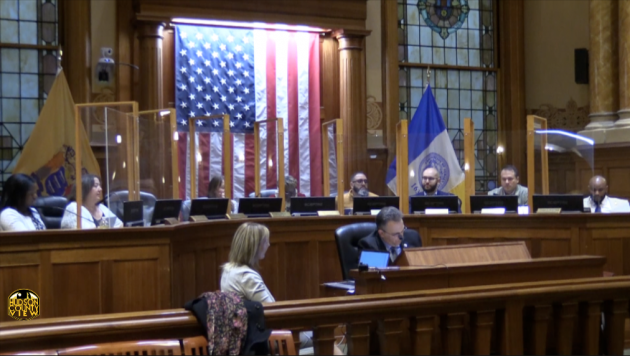 “The reason I’m here tonight is I’m very disturbed about the process. In my other life, I was afforded the opportunity to serve my home town as a council member and mayor for 19 years,” Joseph Chiusolo, the CEO of local business Turn Out Uniforms and a former Cedar Grove mayor.

“So I’m very understanding of the purchasing process as well as the duty each of you do and I’m grateful for that. But tonight, we’re putting the cart before the horse: you’re going to sit here and approve a resolution for $525,000 of uniforms which do not meet the classification of CBRN for our police officers.”

He also said that as a vendor, he is one of the largest providers of uniforms through the company Blauer, and expressed disappointment that the contract didn’t go out to bid since Jersey City often touts their small businesses.

Just before the vote, Business Administrator John Metro said prior to the vote that federal funds were used to purchase the uniforms, which are a one time purchase and billed as being more comfortable and practical than the current Class A uniforms.

During the vote, Ward D Councilman Yousef Saleh said he understood the criticisms, but said he wanted to support police getting an apparel upgrade.

“I hear some of the criticism regarding it, I just saw the uniforms the way they were in the meeting and I think the police officers should have a Class B uniform that they’re able to maneuver and walk and interact with the public a lot easier than their Class As,” he explained.

Ward E Councilman James Solomon said that while he was in favor of the concept, he felt the contract should’ve went out to bid and therefore would vote against the resolution.

“I think the case for the uniforms was well made by the leadership of the police department and public safety, I just think it’s good practice when you have a half million dollar expenditure – and this is from capital dollars that we had through the work of the police department, it’s not from our direct operating budget – it’s still an expenditure of city money,” he said.

“And I think going out to bid for an item multiple vendors possess … is something that is much better practice. Bids are not perfect, but I’d feel more confident getting the best bang for the buck, knowing we got a good deal.”

Ward F Councilman Frank “Educational” Gilmore voted yes, but said in the future he’d like to see prep work commence after a contract is approved, not before.

Councilman-at-Large Daniel Rivera, who often speaks out in favor of the police and fire departments, said he would support the police, but also called out the Public Safety Department for the way the contract was handled.

“I want to be very, very clear here: the Public Safety Department screwed up here by putting the cart before the horse. This is not about the vendor, about turnout, that it went out to public bid, the fact that the bold-faced disrespect that was done by actually fitting our police officers before this came to council,” he exclaimed.

“I just hope that that practice doesn’t happen or continue to happen. The reason I’m voting for this is working with a Class A uniform, the way the director wanted it a few years ago, ‘everyone must wear a Class A uniform.’ Now all of a sudden he’s listening to the officers ‘oh, they should be more comfortable, let’s give them a Class B uniform’ … The practice of how we got to that point is ridiculous.”

Only Solomon voted no, for a vote tally of 7-1, with Ward C Councilman Rich Boggiano absent.

The council also approved a dozen other resolutions for the Public Safety Department, which included a $2.3 million contract for police body cameras, which are mandated by the state.