The Jersey City Council discussed an ordinance that would allow them to employ more aides, as well as the controversial Morris Canal Manor project, during this afternoon’s caucus meeting. 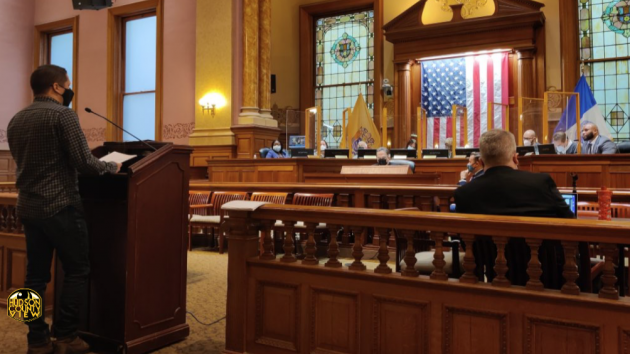 He noted in the last U.S. Census, the city’s population passed 270,000 and this allowed to be eligible to increase the size of the government under New Jersey’s Faulkner Act, which governs many municipal governments including Jersey City.

“It increases expectations. People can and should demand more from us,” Solomon added.

He added they would likely not not hire the four full-time aides permitted at once since the city only permits one at the moment, noting that the short-term goal would be two full-time aides.

“It’s a lot that we do and the more help we get the better it’ll be, not just for us but the residents.”

Council members would be able to have two full-time aides or up to four part-time aides, as well as raising he salaries for of max of $35,000 for part timers and a max of $85,000 for full timers.

He noted aides will be entitled to periodic evaluations and salary increases which are based on experience and performance, among other factors.

“It’s a very personal relationship you have with an aide,” Baker noted.

“Everyone would be typically allotted the same dollar amount,” Business Administrator John Metro chimed in.

Baker also noted they must they comply with the city minimum wage of $17 an hour.

Additionally, Boggiano said with the traffic going through Jersey City on its many thoroughfares is nearly one million people.

“We are a major city and we need to start thinking like a bigger city,” he said. “If they want a better city it’s gonna cost.”

The Morris Canal Manor development plan, currently in Ward F though heading to Ward A due to municipal redistricting, was also reviewed.

He noted it first came before the council in 2020 and that the Morris Canal Development Corporation filed suit against the passed ordinance.

In September, a judge remanded the matter back to the planning board, which they again approved with amendments back in December.

The 17-story plan includes five percent affordable housing, a recreation center, 40 parking spaces next to Berry Lane Park, an area reserved for women and/or minority-owned businesses, among other amenities.

“Is this going to be a white box or a rec center?,” Gilmore, who has openly opposed the plan, asked.

Ward said it included a basketball court and square footage designated for other structures that are yet to be determined.

“This is not a state-of-the-art rec center correct?” Gilmore asked.

“I don’t know how to answer that question,” Ward replied.

“You don’t know what a state-of-the-art rec center is?” Gilmore asked.

Ward noted the ordinance read that the developer “shall work with the city and the Ward F councilperson, and other entities deemed necessary to develop the programmatic mix of facilities,” adding that it also includes language that is yet to be determined.

“There’s a lot of uncertainties here, we don’t really have a lot of clarity,” Gilmore replied.

Solomon asked if the new inclusionary zoning ordinance (IZO) applied to the project, to which Baker said that the judge in the prior case ruled it did not.