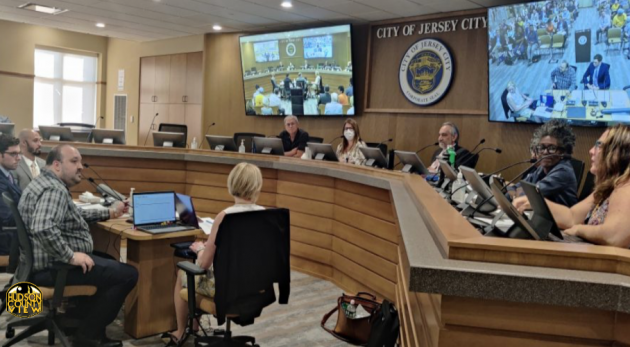 The board first noted they wanted to wait for the state to make rules regarding cannabis consumption lounges before they sign off on any approvals.

“I’m not personally comfortable voting on a consumption lounge until they reveal all the rules,” CCB Chair Brittani Bunney said.

The full adult-use cannabis market rules will be revealed to the public by the NJ Cannabis Regulatory Commission (CRC) on August 1st.

“We’re uncomfortable passing a rule the city and state has not given us guidance,” Vice Chair Jeff Kaplowitz added.

Nonetheless, they briefly heard from counsel for the Medusa dispensary lounge application. While the proposal was approved by the planning board in April despite heavy opposition, the CCB had tabled their measure at two meetings in a row in June.

“We discussed some of their concerns and some of their requests. They requested that we have this hearing carried. On June 30th, my client was approved for a license by the CRC,” attorney Rosemarie Moyeno Matos said.

The board obliged and said they’d likely be heard at their September 12th meeting.

The Local Modiv application at 155 Newark Ave. was up next and was off to a rough start.

“I’m not comfortable with the applicant’s social impact on the neighborhood,” Kaplowitz said.

“I’m still concerned about the hiring and the impact on the Impact Zone … I don’t see any kind of connections to the area above Woodward Street. You say want to participate, but you had no connection to that area at all,” CCB Commissioner Glenda Salley Perkins added.

The measure was voted down 3-0(2), with Bunney and CCB Commissioner Stacey Flanagan, also the city’s director of the Department of Health and Human Services, abstaining.

The next applicant was Uforia at 138 Griffith St. in the Heights, which is owned by Albanian American resident Bashkim Spahi.

“For me, it’s about the children,” he began.

Spahi said he had donated money for school supplies to local organizations, as well as that he was also eager to hire locals, including felons, and give back.

“I was concerned about the operations of the business and you owning that. You spoke very little last time. I came away with the sense that you were not ready. I don’t know if I feel any differently,” CCB Commissioner Courtney Sloane explained.

Spahi explained he has managed a business with 30 trucks and has experienced executives handling finances, along with other key components of managing a local business.

“The outfacing part of the business facing the community, where you are with that?,” Sloane asked.

Spahi replied that he sat down with Ward D Councilman Yousef Saleh and reached out to various community groups.

“When it comes running the store and the employees, that’s me,” he said.

“I’m abstaining. MOUs are not moving me in any direction,” Bunney indicated.

“I just want to make sure my area, the Greenville-Lafayette area, is taken care of,” Perkins said about the Heights-based dispensary before voting yes and asking them to help the rest of the city.

“I am going to also abstain from voting. You’re not ready,” Sloane stated.

The resolution was approved 3-0(2), with Kaplowitz, Flanagan, and Perkins voting yes.

Attorney Frank Vitolo explained that Oceanfront Holdings, with a proposal for 141 Newark Ave., was expanding the medical cannabis dispensary license they won last December to get an adult-use retail dispensary license. He said they are 75 percent women-owned.

“We do seek the board’s consideration and hopefully approval,” Vitolo noted.

“I was given a second chance at life the moment I discovered I was cancer-free,” Oceanfront Holdings President Amanda Handy said.

She wants to partner with a homeless shelter and work with Miracle Temple, led by Pastor Doris Cherry, also indicating that like to be open by late October or early November.

“It looks like you’re doing less medical than recreational even though you have a medical license,” Flanagan said about their financial projections.

“I plan on having a register dedicated to medical patients in the dispensary,” Handy responded.

Oceanfront Holdings COO Ron Smalley, of Portland, ME, said he has been a cannabis industry consultant for 11 years. Smalley’s website notes the firm also invests money. However, there were no details on the nature of their investments in this instance.

He explained the other partners are Benny and Stacy Shabtai.

“I feel somewhat misled,” Flanagan said about them seeking to switch from medical to adult-use cannabis so quickly.

“There are a lot more adult-use consumers than medical consumers. We’re in communication with the state, and they make sure we have enough product on hand and when we sell. There are a couple of firms that were fined for that,” Smalley said.

Resident Sage McDonald asked about the specific investments that would be made for the local community.

“We are going to partner with local community organizations. I’m forming relationships and being introduced,” Handy replied.

“This is the weakest part of your application,” Kaplowitz indicated.

Another resident, Frank Robinson, also asked to know about specifics, while Barbara Camacho criticized their lack of social justice outreach and expungement plans in their application – which received applause from the audience.

United Food and Commercial Workers International Union (UFCW) Organizer Hugh Giordano supported the application since they will allow their workers to form a labor union and will not interfere since they signed a Labor Peace Agreement (LPA) for their 2019 application.

Despite that, Flanagan made a motion to table due to their lack of social equity focus in the application.

“The social equity piece, that’s the centerpiece of what all this is about,” Sloane said.

The vote was 3-2 to carry the application to another meeting, with Sloane, Perkins, and Flanagan voting yes, while Bunney and Kaplowitz voted no.

Furthermore, Cannabis Place 420 Corp. attorney Brian Aloia, who also serves as Corporation Counsel in Hoboken, noted they received planning board approval in May.

Owner Osbert Orduna noted he is a first-generation Latino and U.S. Marine Corps disabled veteran, pointing out that there are few Hispanic owners in the industry.

Orduna added that their location includes an event space that will be used for community events like programs to help felons get back to work, as well as financial literacy classes.

He further stated they want to have their workers unionized, indicating they want to work with independent cultivators and finance community grants.

“Your community impact room, is someone allowed in that space under the age of 21?,” Flanagan asked.

“It’s separate and apart. It has its own bathroom. There is a hallway that connects the spaces. However, they are access controlled and restricted,” Orduna said.

Giordano also reiterated his support of the cannabis business before Kaplowitz called it a “great application.”

The measure was approved 4-0(1), with Bunney abstaining.

Hudson County Clerk E. Junior Maldonado was in the audience to support the application, among other supporters from the Hispanic community.

Finally, last applicant was KushMart Jersey, seeking a cannabis lounge and dispensary at 1521 John Kennedy Blvd. Only the dispensary aspect of their application was heard, which would be the second location of a Washington State dispensary.

Bunney said they did not try sufficiently hard to reach out to the community, saying that was unfortunate since they would be near Soaring Heights Charter School.

“I’ve been smoking cannabis for five decades, and I feel I’m a very responsible individual,” Kaplowitz said in defense of applicant, indicating he knew electeds who consume as well.

The proposal narrowly passed 3-2, with Kaplowitz, Perkins, and Sloane voting yes, while Bunney and Flanagan voted no.

The remaining applicants, The Other Side Dispensary, The Medicine Woman, Green Flamingo Dispensary, and Canabee were pushed to the next meeting.