Two adult-use cannabis dispensaries were approved during the first application hearing of the Jersey City Cannabis Control Board last night. 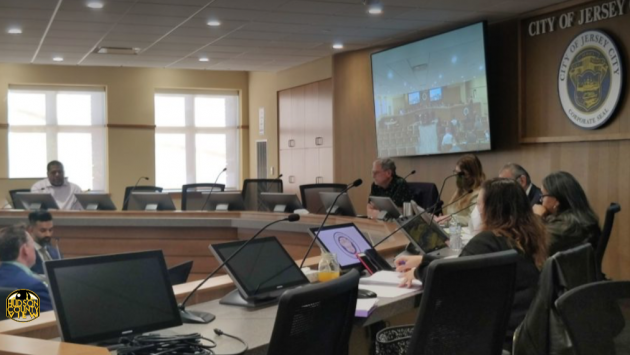 The first company, Blossom Dispensary, was the first dispensary approved by the planning board in March and would be located at 746-748 Tonnelle Ave.

Peter Kelly and Jay Bhatt served as Blossom’s attorneys, while Bina Bhatt, Jay’s wife, is the COO and Sapna Bhatt, Bina’s sister, is the CEO.

“I’ve been involved in a lot of cannabis operations in New Jersey and the country. This is one of the better-financed ones,” Kelly said.

“Who’s going to be running the day-to-day operations?,” asked Board Counsel Ron Mondello.

“We both are. We’re going to leave our full-time jobs. We have already purchased the property. We’ll be having 14 parking spaces,” explained Sapna Bhatt.

“We can serve not only the Jersey City community, but also anyone passing through. Many of the neighbors are happy we are investing in Tonnelle which they mostly feel has been neglected,” added Jay Bhatt.

CCB Vice Chair Jeff Kaplowitz asked if they sent out notices of the hearing beyond those who live within 200 feet of the project.

“We have not. It’s a new industry. We’re all learning as we go. I have not come across a notice requirement,” Jay said.

The board collectively said that there is no notice requirements for cannabis review boards, though it is viewed as a courtesy since planning and zoning boards do require them.

To that end, Kelly committed to sending out notices in the future upon further questioning from Kaplowitz.

Sapna Bhatt that they have all the capital they need to begin operations, which is rare for a cannabis company.

Additionally, Bina Bhatt said they want to employ minorities and economically disadvantaged people, as well as to work with the York Street Project that helps battered women and the Hudson Pride Center.

She also mentioned hosting expungement seminars in there was an interest in the community.

“Every applicant that comes before the board should do that,” Kaplowitz said.

Furthermore, Blossom is aiming to create 18-20 jobs starting at $20 an hour and have signed a Labor Peace Agreement (LPA) with a Teamsters union that say they won’t interfere if their workers seek to form a union.

“Even though it’s not in the regulation, would be willing to send a report quarterly to the [state] Department of Commerce to help show your progress?,” Kaplowitz asked.

CCB Commissioner Stacey Flanagan, also the city’s Department of Health and Human Services director, noted she was mentioned in their proposal without her knowledge before going on to ask if the business had secured letters of intent from the aforementioned nonprofits. .

“We’re at the infancy. We were unaware we were to provide that today,” Bina Bhatt replied.

“It wasn’t required, I want to make sure those nonprofits get those community benefits,” Flanagan explained.

Kaplowitz wanted them to document all the complaints from everyone with their response to it and to notify the government on a quarterly basis.

“This will help the Department of Commerce,” he said, to which the business owners agreed.

The next company was MMD NJ Inc., which would be located at 655 Newark Ave in Journal Square. MMD NJ Inc. attorney Zachary Rosenberg said they have owned the property for three years.

“We have the perfect combination of local ownership and expertise,” she said.

Steve Ashbel, of MMD, an Encino, CA native, explained he founded the company with his brother Michael Ashbel, a Los Angeles native, in 2006. Overall, they have four locations in California and hold 13 cannabis company licenses between California and Missouri.

“So no one who owns this business lives here?,” Flanagan asked.

“That is correct,” Rosenberg answered.

“Any cannabis business that comes to Jersey City, the people should benefit as much as the owners,” Kaplowitz said.

Michael Ashbel stated that they want to hire 28 people locally, noting they have done so at their other locations.

Capaldo explained said was involved with a local nonprofit and was also previously a Ward A Democratic committeewoman so she was very familar with the area.

“What about benefits? Are you providing health insurance?,” CCB Chair Brittani Bunney asked.

“Have you reached out to any reentry programs? We have several,” CCB Commissioner Glenda Salley Perkins said.

Steve Ashbel said they’d be happy to reach out to any organizations the board recommends, including the Jersey City Employment and Training program and the NJ Reentry Corporation, which is run by former Gov. Jim McGreevey.

Furthermore, MMD pledged that two percent of its gross profits would go to charity.

“Donations are nice. But donations do not help residents who need jobs,” Kaplowitz responded.

“We will ensure we hire 90 percent local,” Michael Ashbel continued.

Kaplowitz expressed trepidation over the fact that they had been operating their businesses a ways off from New Jersey.

“We will be canvassing the neighborhoods up to 800 feet in every direction. We will be hosting community open houses,” Michael Ashbel said.

Bunney said that their proposal can use some fine tuning before going before the city council, also pushing for benefits for local residents.

“You need all of this ready before you go to the city council. Without their support you cannot open a cannabis business in Jersey City. It is incredibly important this benefits Jersey City residents,” she said.

Steve Ashbel said they were one of the first companies that sold adult-use cannabis in California, so they proactively started a public education campaign on its nuances.

“We’re going to bring that program to New Jersey,” he said.

“What is the percentage of ownership?,” Bunney asked.

“In Missouri you have a Social Equity Manufacturer. Tell me about that,” Mondello asked.

“We were introduced to a group that wanted to apply for a license. We were put on their board. We literally trained them,” Steve Ashbel explained.

“You’re the mentors: what a wonderful idea. Suppose there was a Person of Color in Jersey City. Would you do that as well?,” Mondello questioned.

Kaplowitz added conditions to their approval, which included securing memorandums of understanding with local nonprofits.

They also have to hold job fairs twice a year with the goal of hiring minorities, as well as promoting scholars to their education platform “MMD University.”

“You are the first multi-state operator we are hearing and the first one coming to Jersey City. I hope in a year we are not upset,” Bunney said before the application was approved unanimously (4-0).

If approved by the city council, the dispensaries can apply for their adult-use cannabis licenses with the state.