The Jersey City Cannabis Control Board (CCB) approved two adult-use dispensary applications and postponed the vote on three others at last night’s meeting. 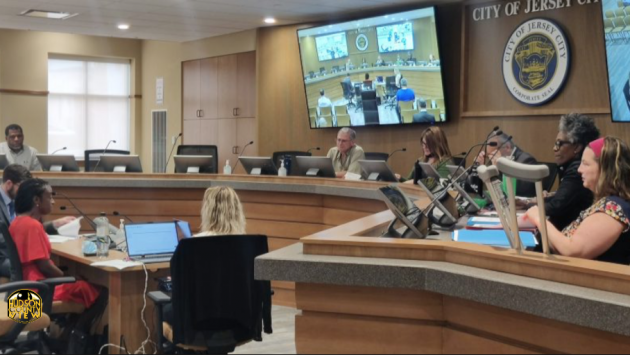 The first application heard was for a micro dispensary by Jennifer and David Moore of Butler & Baldwin, which is based at 75 Martin Luther King Dr. Jennifer is the daughter of Council President Joyce Watterman.

She said the business is named after African American authors Octavia Butler and James Baldwin. Since they want to educate the community, there will be a bookstore hosting minority authors adorned with artwork from local minority artists.

“We are Black-owned and woman-owned and I am glad to say that on the record. The barrier to entry is very high to get into this, so thank God we could use our savings,” Jennifer Moore said.

“The bookstore, that can be open to everyone?,” Vice Chair Jeff Kaplowitz asked.

“Children cannot just walk into the bookstore. Absolutely, you have to be of age,” she replied.

Kaplowitz also asked if the proposal had cleared the planning board and if they were given special conditions or not.

“Just the standard conditions. The applicant does have planning board approval. We just don’t have the resolution,” attorney Zachary Rosenberg replied.

CCB Commissioner Stacey Flanagan, also the director of the city’s Health and Human Service Department, said she asked the Quality-of-Life Taskforce to allow for cannabis complaints to be collected.

“It will be another part of the complaint summons,” she said.

CCB Chair Britanni Bunney added that she thought that it was realistic to say they would learn as they go.

Celeste Williams, of the charity Caring Capable Hands, explained she holds retreats to take young people off the streets and spoke in favor of the Moores.

“A lot of our youth don’t get the opportunity to, sometimes work in the community they live in. A lot of youth can’t go everywhere in the community because of their association and affiliation,” Williams said.

“I have grandsons that can’t leave off the block,” CCB Commissioner Glenda Salley said, commending her work.

The CCB granted them unanimous approval (4-0) before Watterman met her daughter outside the rooom to congratulate her daughter.

Partners David Jefferson, his wife Pamela Jones, and his sister Charmaine De Jesus were the owners of the Leaf Joint, a CBD store located at 391 Central Ave., which is seeking a micro adult-use cannabis dispensary license.

Attorney Gerard Pizzillo noted they were approved by the Planning Board and had a copy of the resolution hands. He noted that the three minority owners have operated a CBD business for three years.

Jefferson explained he is a local with a background in retail security and a former corrections officer. He noted his experience as a serial entrepreneur gave him the necessary significant capital to apply for a license.

“I don’t think we’ve heard a business that is currently operating looking to convert to a cannabis dispensary before. How is your relationship with Jersey City Heights community?,” Bunney asked.

“I could have filled up the room, but we were last, and I didn’t want to take too much time,” Jefferson said.

“I believe it. You’re also a block away from the police station. How is your relationship with the JCPD, have you had any issues with your current space?,” Bunney replied.

“They come in and patronize the business. Some of them worked for me when I was the Manager of Sears,” he noted.

Counsel for Decades Dispensary, who received approval at the last CCB meeting, noted they would be located less than 200 feet away. Both applicants also have planning board approval and Mondello said it was ultimately going to be up to the city council.

“We would be the only micro business on that block,” Jefferson said after Kaplowitz noted microbusinesses may be exempt from the 200 foot rule.

“I think this is what the council envisioned when they legalized cannabis,” Pizzillo said about his client.

“You’re the first application that I don’t have any conditions for, excellent,” Kaplowitz said.

On that note, they also received unanimous approval (4-0).

The next applicant for an adult-use dispensary license was Uforia, located at 138 Griffith St., another Heights proposal, and fully owned by Albanian American resident Bashkim Spahi.

Attorney Rodney Nelson noted they have not been approved yet by the planning board since they directed them to the CCB first, which is supposed to be the standard process.

It didn’t take long for the board to note that they didn’t seem prepared to present.

“You don’t have a lot of answers to some for the things we asked, like the security plan. Maybe you are nervous [but] we are friendly. I do feel I am being very fair. It seems like you’re not totally confident in your story yet,” Bunney explained.

“If we are tabling something, it’s only because we’re asking for more information. People are rushing to get these in. But I think it’s better to come back with a better application. I hate tabling people, I feel bad.”

“I wasn’t kind of comfortable because they are a priority. They are the ones with the high number of arrests for marijuana charges,” she said.

As a result of the board’s concerns, their hearing was postponed until their next meeting.

Finally, the two controversial applications pushed at the last CCB meeting did not have any luck in advancing this time around.

Attorney Rosemarie Moyeno Matos for the Medusa dispensary lounge said they are working with the Catholic Church to overcome their objections.

“Hopefully we can have another meeting and come to an agreement,” she said.

Local Modiv, which has a location issue since their dispensary would be at 155 Newark Ave. and Oceanfront Holdings is at 145 Newark Ave., was also pushed again.

“The applicant has worked diligently, and we’ve given notice to all neighbors,” attorney Matthew Miller said after handing Mondello a packet.

“I would have to carry because I can’t vote on an application when something in the neighborhood of 30, 40 pages [was just given],” Kaplowitz said.

Bunney noted Local Modiv is holding a community meeting Thursday. She indicated she wanted to know the results of that before their attorney, Joseph Shapiro, agreed to having their application carried.