The Jersey City Board of Education pushed a vote on a $955 million budget that would come with a $2,400 annual tax increase per household at last night’s meeting. 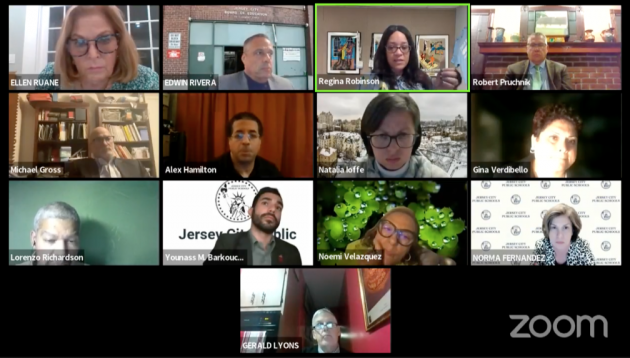 “So what’s the scenario in using some of the bank cap in the sense of reducing the amount that taxpayers would have to pay. Obviously we’re not going to use the whole $185 [million] because I don’t want to deplete it completely,” noted Vice President Gina Verdibello.

School Business Administrator Regina Robinson said that while that was correct, the board still has the responsibility to submit a balanced budget to the county.

She added that Acting Superintendent of Schools Dr. Norma Fernandez is asking for $184 million to cover the $754 million in budget expenditures.

The board noted that few options exist outside of layoffs or cutting programs, particularly after another significant budget cut from the state to the tune of $68.5 million.

Fernandez was clear that she feels the budget should remain as is despite a less than ideal tax hike.

“What are your recommendations of places and things we could cut? Do we have any place to find money, Regina? I don’t think so,” she said to the board.

Verdibello and Trustee Noemi Velazquez both indicated they would support the budget in it’s current former, noting that it’s up to local officials to fully fund the schools regardless of what’s happening in Trenton.

Conversely, Trustees Alexander Hamilton and Younass Barkouch said the burden on taxpayers is too great in the current spending plan.

“There is no way we can tax our way out of this with these levy increases,” asserted Hamilton.

“I am responsible for students, not Jersey City residents, but to support these students, I must support these parents,” Barkouch said, also noting that lifelong residents shouldn’t have to take the make up the full difference.

When Trustee Lorenzo Richardson asked if anyone had suggestions on how to make up the financial woes, no one spoke for about 20 seconds before Trustee Lekendrick Shaw joked that it looked like they were playing Texas Hold ‘Em and suggested delaying the vote.

Ultimately, the board decided not to take any formal action after five hours of deliberations, with plans to convene again on Monday.

A preliminary spending plan must be approved by the county superintendent by March 28th before the board of education must okay a final budget a May.

A November directive from the U.S. Department of Education indicated the the district could recoup up to $126 million in state cuts in order for them to comply with the American Rescue Plan, but those funds have not been allocated yet.

The city has also said that they would not help make up the difference.