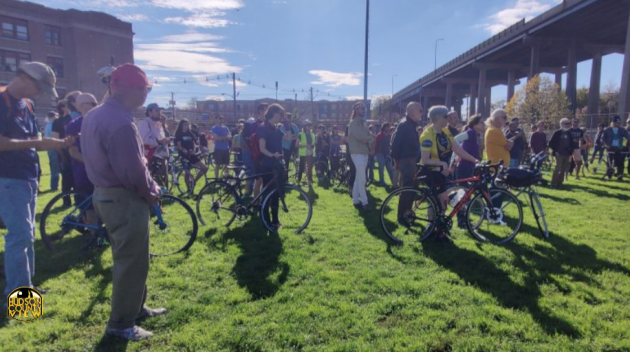 A coalition of groups had gathered including Bike JC, Bike Hoboken, Safe Streets JC, and Bike North Bergen, along with Friends of Liberty State Park.

The Jersey City and Hoboken City Councils have passed resolutions opposing the project, which was proposed by the New Jersey Turnpike Authority. The protest was preceded by a bike ride around the city.

“This is one of the worst ideas in Hudson County in recent history,” began Ward E James Solomon. He noted that his baby daughter would experience the negative effects of an expansion when she attended the elementary school across the street in a few years.

“It’s is purely politics. If anybody wants to be a leader of this state … you can’t fight for projects that make climate change worse. It’s November 12th and it is 70 degrees. Thousands of people’s lives in Jersey City are going to get worse. We’re saying hell no. Hell no, we are not going to expand this!”

Ward F Councilman Frank “Educational” Gilmore agreed that the endeavor didn’t make sense financially or logistically, pointing out that traffic or congestion regardless.

“We breathe the air with you. We oppose this with you. Investing in infrastructure is smart. It doesn’t make sense. The tubes literally are small. Many more will sit in traffic We don’t want it.”

Hudson County Commissioner Bill O’Dea (D-2) called said the extension was “one of the dumbest things you could think of: It’s the worst idea I’ve ever heard.”

“Phil Murphy, who is a friend, should just come and walk this way. I think he would realize that’s it. It shouldn’t be as difficult as we think. I think his heart is with us. Some political forces might be influencing him. We just need to make our political forces stronger.”

Ironically, Ward D Councilman Yousef Saleh said he was late to the protest due to traffic on the turnpike extension.

“It’s a jobs project. This is a jobs project that will expand the Turnpike into a bottleneck … We need to be planning for the future and not our pocketbooks today. We don’t want to be breathing in their exhaust. Those asthma rates are going to go up.”

He also said the government should fund more charging stations for electric vehicles.

Hudson County Commissioner Anthony “Stick” Romano (D-5) reiterated a point by his colleague O’Dea, stating this could have a serious impact on nearby residents.

“The turnpike has to realize there’s different ways to do what they want to accomplish. If this expansion goes through, there’s possible eminent domain of people’s property … who have been here for many, many years,” he said.

“This project, without a doubt, is on the wrong side of history,” Jersey City Infrastructure Director Barkha Patel said, noting that Mayor Steven Fulop was against the project and was one of the first elected to do so.

She said that conditions worsened conditions almost immediately after similar projects were completed in Los Angeles and Houston, calling it the “fundamental law of roadway congestion.”

Furthermore, Patel said New Jersey would be “using public resources to deepen the scars of environmental injustice in Jersey City.”

Doug O’Malley, of Environment New Jersey, argued it would especially hurt those in low-income neighborhoods. He urged them to do a traffic analysis. He explained that multiple agencies would need to approve the project for it t to move forward.

“The assumption is if you build more lanes, you’ll solve traffic congestion. But as we’ve seen really since the dawn of the highway era, the more you build capacity on highways, the more cars ultimately use those highways. Within four years, congestion gets as bad or worse than it was before,” he explained.

Bike JC Vice President Tony Borelli said the “project would undermine everything we’ve done” just because “some unelected bureaucrats want to go the other way.”

Matt Smith, of Food and Water Watch, said this was one of seven fossil fuel projects in the state that would increase greenhouse gas emissions.

“When this project was built in 1956, they didn’t ask Jersey City residents. They didn’t do analysis,” Smith noted.

“Governor Murphy, please follow the science. People get off the turnpike and go through our local roads. Jersey City is filled with tunnel traffic,” added Safe Streets President Jimmy Lee.

Lee said in the 1950s, the NJ Turnpike Authority ignored pleas from the city of Elizabeth to move the turnpike closer to the waterfront to avoid affecting residents.

She further stated that the air quality in Hudson County has been rate an “F,” therefore better projects to fund would be increase light rail service, along with building more bike lanes and more bus lanes.

As suit between Kushner Cos. and Jersey City wages on, settlement...

Police: Man revived with CPR in Jersey City before getting caught...