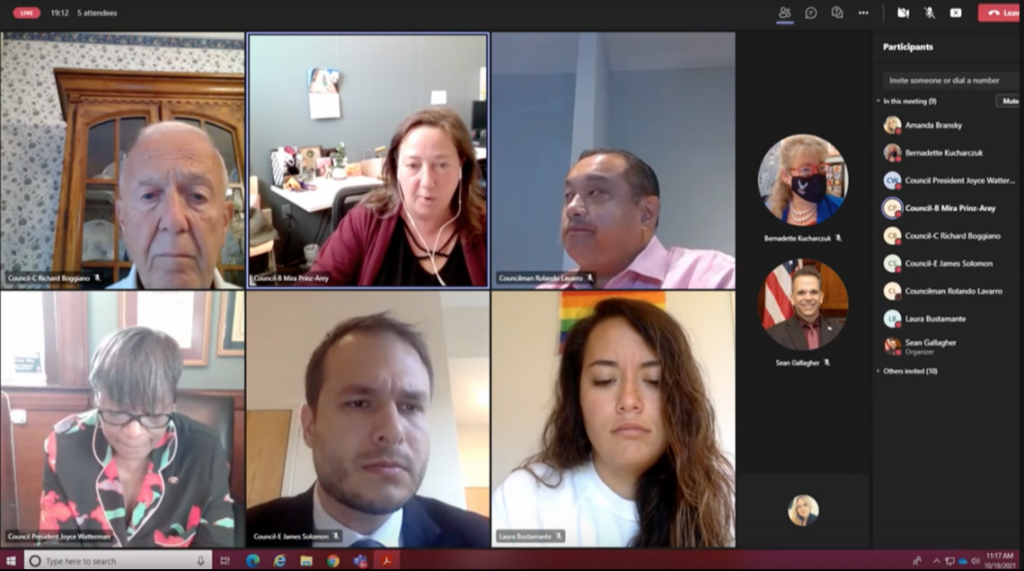 Ward E Councilman James Solomon, who proposed the committee along with Council President Joyce Watterman, said they want to understand the problems and propose a solution to Suez, their water services provider, about Ida and issues from last year.

“Going back to the E. coli a year ago, a year-and-a-half ago, there were a couple of things concerning to me,” Solomon said at the beginning of the 36-minute meeting.

“We need to ensure people know there’s a boil water advisory. With Suez, they’re kind of focused on the ratepayers, people who are home or are property owners. That leaves out both residential and commercial tenants: many didn’t hear in as timely a manner as we would have liked.”

He continued that the city council doesn’t have a direct contact with Suez, so therefore has to but rather interact through the city’s municipal utilities authority (MUA) or office of emergency management.

Solomon also referenced the September 7th caucus meeting when Suez officials, including their North American CEO Nadine Leslie, were grilled over the company’s Ida response, where they indicated that they “overpromised and underdelivered.”

Suez faced heavy scrutiny from residents and officials alike for botching water deliveries in the aftermath of Ida, showing up three to four hours late in most wards, as HCV first reported.

“Years ago when we had a problem, we had the police cars riding around with the loudspeakers notifying each and every community in the city. I think we should go back to that,” Ward C Councilman Rich Boggiano, a retired police detective, said.

“That was a very effective way of notifying people.”

Solomon agreed that it may be a quick, low tech way to inform residents immediately.

“The problem with Suez is people have to be notified right away,” Boggiano added.

“People were very upset, some of them without buckets because they thought it was just bottled water. It was a mess … I think the community needs to understand each role from Suez to MUA.”

Ward B Councilwoman Mira Prinz-Arey mentioned that there was another incident from about a year-and-a-half ago where a water main break impacted Wards A and B.

“This was before the E. coli issue and Ida. We had similar problems with communication … We need in my opinion a translation department for the city, she said, indicating that multi-lingual police officers could help with that.

She also noted that on September 3rd, the Friday after Ida during the water delivery difficulties, no one was working the water truck so her and a Suez employee decided to oversee the operation.

“The complete lack of internal and external communication made it extremely difficult because you have nine council people calling the same people,” she added.

Prinz-Arey also called for a voucher system whereby Suez could have reimbursed people who bought water.

“Our communication is decentralized. Decision-making and operations should be centralized in a time of crisis,” chimed in Councilman-at-Large Rolando Lavarro.

He said they need to investigate Suez’s chain of command to figure out who keeps dropping the ball.

“We need to hold people accountable. There needs to be transparency around this. Someone didn’t get the job done, both with Hurricane Ida and E. coli.”

Watterman agreed with Lavarro that the council should pass a measure to better prepare the city for an emergency.

Solomon noted that future hearings of the ad hoc committee will have witnesses called and that the date of the next meeting is to be determined.