Hudson County Democrats, as well as some politicos from Bergen County and beyond, packed out the Waterside Restaurant for Guttenberg Mayor Zitt and his team last night. 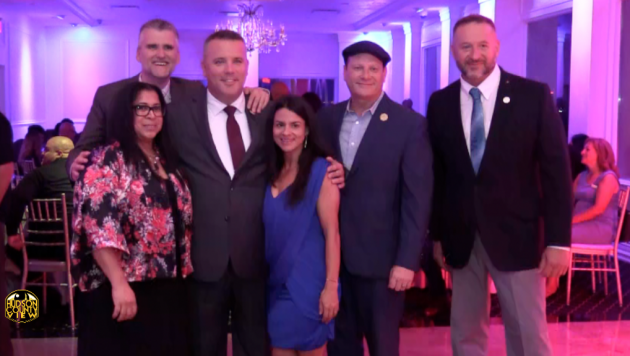 “He’s shown a great deal of vision in the short time he’s been here and he’s a young guy, he’s up and coming,” state Senator (D-32)/North Bergen Mayor Nick Sacco said in front of a crowd of at least 200 people.

“I think a lot of us are gonna be gone long before Wayne is because Wayne Zitt is extremely capable, competent and working hard to make Guttenberg a great place.”

Humbled by those words of encouragement, Zitt expressed great satisfaction with the team around him, which includes Council members Monica Fundora, William Hokien, John Habermann, Richard Delafuente and Juana Malave.

“You’re only as good as the people you have around you: this team we have here, we’re moving things forward we’ve been doing things the right way and thinking things through, not impulsive,” he explained.

“There’s times I get told to shut up, and I love that, because there’s certain people on this board that aren’t yes people – and I love that. Because anybody can be a yes person, just have everything fly through, and that’s not a team – that’s a dictatorship.”

The Guttenberg Team, where Zitt is approaching the halfway mark of his first term at the end of the year, certainly appears to have caught the attention of a significant portion of the Hudson County Democratic Organization and beyond.

“Don’t be embarrassed, we all work together,” emcee Joey Muniz joked upon recognizing Zisa’s presence.

The event was almost instantly touted as a great success, with some optimistic North Hudson politicos guesstimating that Zitt and his colleagues had raised over six figures on the night.