Chiaravalloti, Jimenez and Chaparro are primary sponsors on two bills that would establish a ranked-choice voting system for federal, state and local candidates in the Garden State.

“It’s an idea we need to talk about if we want to encourage people to vote, especially when you consider there is a higher number of unaffiliated voters in the state,” Chiaravalloti told HCV over the phone. “It seems to make a lot of sense.”

Ranked-choice voting allows voters to select their preferred candidates on the ballot in order, thus eliminating plurality election wins or the need for runoff elections.

The system is used in a variety of different countries including Ireland and Australia, and is used in a number of counties and municipalities throughout the United States.

Maine adopted the system for state-wide elections in 2016 and, in last year’s midterm elections, one of the state’s incumbent representatives in Congress, Bruce Poliquin, was voted out of office despite receiving more votes than the victor, Jared Golden.

Even The Oscars utilizes a ranked-voting system for its Academy members to make their nominations.

Bill A-5205, introduced in March by Assemblyman Andrew Zwicker (D-16) would establish the new voting system, which would work the same way from the presidential to the state assembly elections. It’s also sponsored by Chiaravalloti and Chaparro.

Meanwhile, NJ A-1802, meanwhile – which was originally introduced by Assemblyman Tim Eustace (D-38) before he stepped down – would establish the “use of instant run-off voting in balloting for certain local elective public offices.”

If adopted, municipalities would have the option of adopting the system.

Chaparro said she plans on reintroducing A-1802, which also has the support of Jimenez, in the next legislative cycle, but admitted both bills are a long way from becoming law.

“I don’t anticipate this becoming law anytime soon. But I do think it’s important that we continue to educate people and that we keep talking about this,” Chaparro said in a sit down interview at her legislative office yesterday.

Nevertheless, she said she has had a lot of support from constituents in her district, on display last week when she helped host a community meeting at the Hoboken Public Library to discuss the legislation.

“If we have a proper education [campaign] on this and we talk about before it ever becomes law, people will understand it and will probably want it,” she said.

She also explained why she felt this was a more desirable system than standard runoff elections, which Hoboken voters brought back in definitive fashion via a referendum question last year.

“I get why runoffs are there, it’s important that the majority speaks, but people get tired of coming out and casting their vote … they’re beat down by the election and now they have to do it again. So I think this, in a way, it’s better … let’s get it done.” 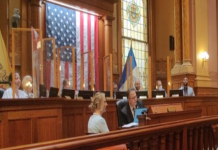