The Hudson County Planning Board unanimously approved (7-0) Story Dispensary in Hoboken, which has recently drawn the ire of some neighbors, citing the limited scope of their review. 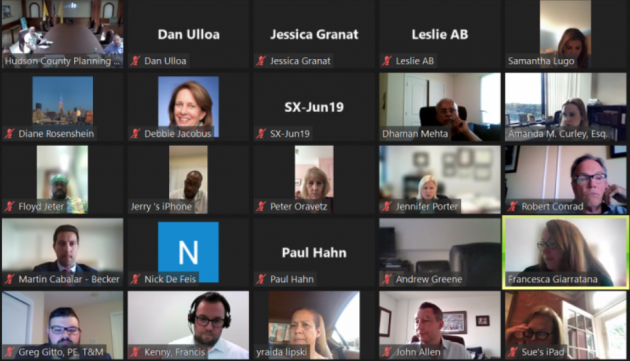 “Our impact is limited to impact on county infrastructure. The issue here is traffic, the location of this proposed dispensary is located at two county roads: 14th Street and Hudson Street,” said Planning Board Counsel Amanda Curley.

Jennifer Porter, counsel for the applicant, said that given the location, 51-53 14th Street, 45 percent of all visits to the dispensary would be via public transit.

“It is their intent to have their loading and unloading done in a nearby garage and escorting the appropriate staff with their security personnel,” added William Masol, Story’s traffic engineer.

Masol obliged, stating that the traffic impact assessment compared data from the most recently completed site and that of a high turnover sit-down restaurant, referring to the former Hudson Tavern.

“The ITE data is in no way perfect. However, it is the best source of data we have to go by,” Masol also said.

He also fielded questions about how deliveries would be made, as well as the impact on traffic during peak hours of operation.

“The expected increase on the county road, 14th was … during the weekday peak hour it was one to three percent of a traffic on the road,” Masol replied, though later said he did not have any data about how many transactions they expected on a regular basis.

51-53 14th Street Condominium Association, Inc. recently sued the Story principles, including Jersey City Mayor Steven Fulop’s wife Jaclyn since she and her business partner own the building, alleging they used bait and switch tactics to acquire the property.

Martin Cabalar, counsel for the condo association, was meticulous when questioning Masol about the project.

“Did you ever visit the property?,” Cabalar asked.

“Not in direct connection with this particular property,” Masol answered.

“Did you conduct any studies… at the location?” Cabalar asked.

“The trip generation analysis you did that’s entirely based on the ITE manual?,” Cabalar asked.

“I think the community feels the intensity of use is being misrepresented. If you had used a quality restaurant, would that have that resulted in lower counts, the same counts?,” questioned Hoboken 2nd Ward Councilwoman Tiffanie Fisher.

“I don’t know what those trip generations rates are,” Masol responded.

“Most of the people in this area would disagree with you. This was a reservation only [restaurant],” Fisher said.

“Are you aware the county is redoing the intersection?” Fisher asked, to which Masol said he did not.

Resident Lisa Baldowski asked is anybody would be in the streets directing traffic, to which Giarratana proposed they submit an additional traffic report within three months of approval to address the issue.

“The applicant would agree to a condition of approval,” Porter quickly replied.

Masol left the hearing after about 90 minutes, around 7 p.m., citing that he had another commitment and that he only heard about the planning board meeting on Friday.

Aaron Epstein, a business partner who will provide management services for the establishment, emphasized how this was not going to take a lot of time for patrons to make their purchases, since they would have pre-order and delivery services.

“We have no intention of seeking a consumption lounge,” he added.

“You’re not going to see a lot of people not from the community utilizing this facility down the line. It’s going to be, at best, the third dispensary to open in Hoboken at a less convenient area to access by car,” he argued, noting that it would operate like a liquor store, therefore concerns about patrons from outside the city seemed unfounded.

“How many times a week are you expecting a delivery?” Vice Chair Rushabh Dhaman Mehta asked.

“Five to seven times a week. We’ll have parking spaces for each … There’s going to be other dispensaries that are going to be easier to get to. They’re just closer to major highways,” Epstein replied.

He later added that there will be plenty of competition, five others in Hoboken and an uncapped number in Jersey City, so he doesn’t anticipate this location to absorb an exorbitant amount of customers.

“Would it also be appropriate to say this is your first experience with traffic in a residential neighborhood?,” Leslie Bradley, who lives above the tavern and called on the city council to denounce the project in March.

“What percentage of your total visits to your store will come in a vehicle?,” Fisher asked.

“It’s really tough to anticipate. I think that number will go down,” Epstein said.

Fisher added that the neighborhood already has “a critical mass of drinking institutions” and asked if a dispensary would be considered an added incentive for partiers.

“I’m not an expert on who frequents these bars: Hoboken has a problem with rowdy bars. It’s [a dispensary] is not a place where people get violent,” he replied.

Commissioner John Allen, who serves as assistant corporation counsel in Hoboken and lives in the area near the dispensary, asked for clarification on what a C-3 district is.

“Can you clarify what is this area is zoned for?,” he asked.

Another resident, Sue Keenan, asked how Story would handle the delivery situation.

“We’re going to create incentives for people to not come by car. People won’t travel to us once the market has matured,” responded Epstein.

During the public comment portion prior to the vote, residents blasted the traffic report Story was relying on.

“It’s a very busy corner, a lot of double parking. There’s no way you could let this one go through if you’ve done your homework and not relying on a bogus report,” Michael Alicastro said.

“There are existing business that are already opened that are similar … I have found when I visited dispensaries outside New Jersey … that the experience is very different than I thought,” Katie Morse said, noting the Green Room, which sells CBD is nearby.

“Have them do a full traffic report. What the applicant is telling you is just not true,” Fisher asserted, who said that Hudson Tavern should have been evaluated as a high quality restaurant.

Bradly said people are “very scared” about the prospect of the dispensary and were displeased with how their concerns at the Hoboken Cannabis Review Board were ignored, also intimating that people may move if the project ultimately comes to fruition.

At this time, Curley scoffed at the notion that the application had be predetermined prior to the hearing.

During his closing argument, Cabalar said the traffic report was “totally inaccurate” and said the applicant was clearly not prepared, evidenced by Masol leaving early.

As for Porter, she said they would install a bike rack outside to minimize traffic, that they would be willing to do a more thorough study as a condition of approval, and that almost none of the residents comments specifically addressed traffic.

Just before the vote, Allen noted that he lived about a block away, to which Curley said she had to take a moment to make sure he was not conflicted from voting. After about five minutes, she said he was in the clear to weigh in.

Allen put the onus on the Hoboken City Council for approving zoning for legal cannabis businesses last year, and while Fisher has said she regretted voting in favor, he asserted that she still managed to “carve out the Hudson Tea” building where she lives.

” … I understand the 2nd Ward councilperson regrets not paying closer attention to it despite voting for it multiple times. By virtue of the city council’s adoption of this ordinance, and because of the jurisdictional limits of this board, based on the testimony … I will be voting yes … I’m proud to say yes in my back yard,” he explained.

He made a motion to vote, which was seconded by Commissioner Thomas Malvasi, the county engineer. Malvasi said that he wanted an updated traffic analysis in the next six months to see how many vehicles this project will bring in, as well as calling for a written agreement to be signed with a parking garage.

Those conditions were agreed upon before the board unanimously approved (7-0) the measure around 10 p.m., after about four-and-a-half hours of discussion.

Commissioners Floyd Jeter, a Jersey City employee, and Jerry Walker, a county commissioner whose nonprofit receives city funding, recused themselves from the vote.