Hudson County Executive Tom DeGise rang in his new year by being sworn in to the sixth consecutive term of his position, which he said is “the best job he’s ever had.” 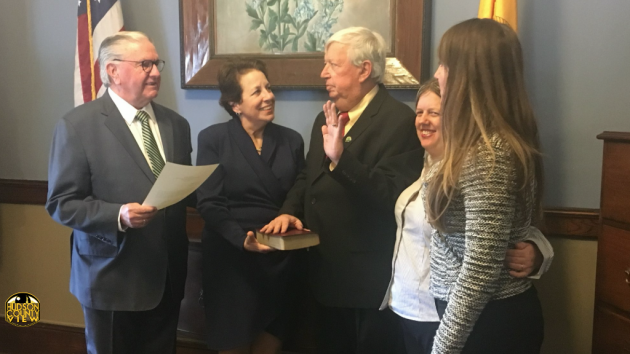 DeGise succeeded Executive Robert C. Janiszewski in a 2002 special election, after Janiszewski resigned from his post amid corruption charges, and has won every election since then.

Prior to becoming county executive, DeGise served two terms as president of the Jersey City Council.

After he was officially sworn in this morning by former state Senate Majority Leader Bernie Kenny (D-33, 1993-2008), DeGise said that he plans to continue an administration where “what you see is what you get.”

“I’ve been here for 17 years, and what you see is what you get. What you’ve been getting has been good, honest, progressive government and I lay a lot of that on the people who are here in front of me and next to me now,” he explained.

“We have a mandate for four more years of that and I hope you’ll all stick with me as we set the bar very high.”

DeGise mentioned three benchmark goals he hopes to meet through his term, which will last until 2023.

The courthouse, which has been in the works since 2018, is projected by the Hudson County Board of Freeholders to be operational by late 2022.

DeGise also said that he hopes Hudson County will have its own police academy by his term’s end, a plan which has been in the works since early 2017.

Currently, all first responders receive academy training at remote facilities across the state.

According to Hudson County spokesman Jim Kennelly, the academy will see limited operations by the year’s end on a property that was once home to the Hudson County Juvenile Detention Center at 635 County Ave. in Secaucus.

Hudson County Community College will be a partner in the police academy’s operations, by providing classroom space and academic support.

Furthermore, the county exec said that he’s motivated to get Casino in the Park, a banquet hall and historic landmark in Jersey City’s Lincoln Park, back into operation by the end of his term.

The county government currently owns the property, which saw a $6 million demolition after a final party in 2017.

The venue has been a landmark for local weddings, political fundraisers, and celebrity cameos including visits from several governors, then-President Bill Clinton, Muhammad Ali, and many more.

The banquet hall will be resurrected by Landmark Developers, which rolled out its plans for a 3-story restaurant at a public meeting this fall.

“Those three things will have my particular attention, but every day, something pops up, so nothing is ever predictable,” DeGise said.

“It could be a nice easy one, or it could be one that makes my hair even whiter. But, I’ve got a great staff of people working with me including Craig Guy [his chief of staff] and I’m asking them to hang with me, because you need a core of people you can trust.”

This year, DeGise won in an ultimately uncompetitive election in which challengers were trounced by Hudson County Democratic Organization favorites across the board in county, state, and local elections.

DeGise won against longtime Hoboken resident Patricia Waiters in a landslide during the June 2019 Democratic primaries, securing about 87 percent of the vote.

He followedÂ  that up up with a successful Nov. 5 race against first-time Republican candidate Kennith Gonzalez, 18. DeGise won with 83 percent of the votes to secure his sixth term, which officially began today.

DeGise’s re-election bid did not see any opposition from other local officials in Hudson County by the time 2019 rolled around.

Officials who launched an insurrection against DeGise in 2018, which grabbed plenty of attention from Hudson County politicos in 2018, had long since buried the hatchet and came out to support DeGise again well before the election took place.

Back in 2018, Union City Mayor Brian Stack and Jersey City Mayor Steven Fulop (both of whom are also Democrats) told DeGise that they planned to oust him in the months leading up to the election, which spurred a turf war that reverberated through the Hudson County Democratic Organization’s members.

For many months, it seemed improbable that the former anti-DeGise factions would do a full 180-degree turn and back him, but by the spring of 2019, Stack and Fulop had joined the HCDO rank and file in a unity rally supporting his re-election bid.

With the countywide civil war now distant in the rear view mirror, DeGise said that he plans on bringing officials across the county together on issues that align with the goals of his administration, and to keep the momentum that seems to have effectively mended the HCDO fences.

“I’ve made many friendships and alliances over the last 25 years, and I hope to tap into those. I think one of my greatest strengths is getting people together, twisting arms, and forming consensus on anything goal that needs to be sold to either the public or the freeholder board,” DeGise said.

“Nobody likes to fight, I think you have to be an idiot to enjoy conflict. Sometimes, you don’t have a choice, and the fight has to happen, but now, it’s over.”