Inge Auerbacher, a Holocaust survivor, was the guest speaker at Bayonne’s commemoration of the 71st anniversary of the liberation from concentration camps.

Members of different religious faiths led those in attendance in prayer and reflections symbolizing the progression of religious tolerance since the Holocaust.

“As mayor, I am proud that the people of many different religious backgrounds are here tonight to take a stand against bigotry and hatred,” stated Bayonne Mayor Jimmy Davis.

Davis presented two proclamations, declaring May 4th “a day of remembrance of the City of Bayonne honoring the victims, the survivors and liberators,” as well as to honor Inge Auerbacher.

“Let us all learn the lesson from her experience that we must fight constantly to maintain human freedom and dignity and let us guard always against all forms of hatred and let us never forget what happened.”

Assemblyman Nicholas Chiaravalloti, also announced that he has a joint legislative commendation from state Senator Sandra Cunningham, Assemblywoman Angela McKnight and himself (all D-31), on behalf of the UJA Federation.

“It’s thrilling to see the number of children we have here in this room tonight because it’s important to never forget. It’s important to remember the horrors of the Holocaust, but also to celebrate. To celebrate the strength of the spirit to survive,” he said.

Bayonne City Council President Sharon Nadrowski, on behalf of city council, also honored “the memory of those who perished” and thanked Auerbacher for her “humanitarian efforts.”

Auerbacher recounted her experience living through the Holocaust as a little girl.

Auerbacher was one of the 15,000 children, of which only one percent lived through malnutrition, diseases and executions.

At the camp, the Auerbachers shared a small room with another family, the Abrahams, who also had a little girl, Ruth, who was around the same age as Inge.

The two became very close until one day, the Abrahams were sent to Auschwitz, where the gas chambers were located, and she never saw her best friend again.

Auerbacher presented a poem from one of the six books she authored about her experiences in Terezin and the road to recovery.

She dedicated “The Star of My Heart” to all the children who died during the Holocaust and to her friend Ruth, who was a devout Christian, but was executed for her Jewish heritage. 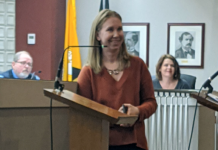 LETTER: Despite criticisms, I stand by my support of Bayonne Mayor...