The Hoboken Planning Board resumed their Story Dispensary hearing yesterday, and just like last time, they only made it through one witness – the project architect. 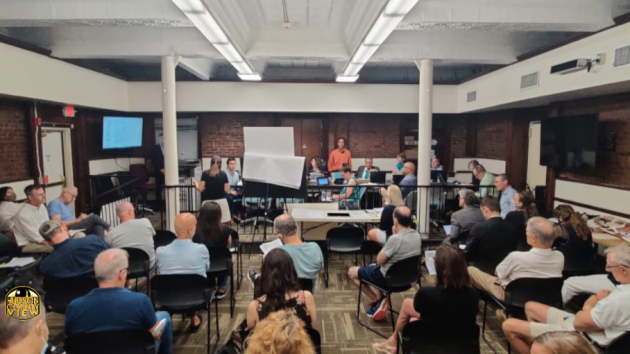 The project, which some neighbors have been outspoken against, has a pending court case has already cleared the Hoboken Cannabis Review Board in February and then Hudson County Planning Board in May.

Relatively early on during the over three-and-a-half hour meeting, Planning Board Chair Frank Magaletta read a letter into the record from County Engineer Thomas Malavasi regarding a proposed loading zone.

“The City of Hoboken Department of Transportation & Planning has contacted the County Engineer’s office regarding the inclusion of a loading zone on 14th Street at the intersection of Hudson Street. There are currently no loading zones on this block,” he wrote.

“There is demand for one, as there are several businesses on this and the adjacent blocks that could benefit from the addition of a loading zone. The County of Hudson Engineering Department is in agreement with the assessment and recommendation of the City of Hoboken’s Department of Transportation & Planning that a loading space be designated at the southwest corner of 14th and Hudson Streets to serve the commercial uses in that area.”

Noting that the county has recently worked with the city to have loading zones approved on Garden, Hudson, and Newark Streets, the county will recommend a consenting ordinance for a board of county commissioners vote.

During questions from the public, 2nd Ward Councilwoman Tiffanie Fisher expressed concerns about upwards of 50 people expecting to go into the dispensary at once, leading to overcrowding at their location at 51 14th St.

“You designed for the building and not necessarily the volume of customers coming through,” she said.

“All the employees wouldn’t be in the dispensary,” also point at that there would be at most six on the floor with customers, while the others would be in the back offices.

“I don’t know what a realistic number would be in the waiting room. It’s designed to hold 55 people,” he added.

Fisher still asserted that this would facilitate excessively large crowds before other speakers vocalized their concerns.

“What is the width of the door on 14th?,” Robert Verthelyi asked.

“The other dispensaries have more than nine registers,” Tormey said.

Others also wondered what the volume would be like, such as Anthony Racaniello, though Tardinico objected since the question had already been asked.

Tom Brennan, who owned the space when it was the Hudson Tavern and sold it to Drew Nussbaum and Jaclyn Fulop – the wife of Jersey City Mayor Steven Fulop – also participated in the Q & A session.

“If you were to utilize the main entrance that was, that entrance is 35 feet from the entrance of a residential building,” Brennan began, immediately drawing an objection from Tardanico.

“Did you realize the door you’re using was going to be closer to a residential door?” Brennan rephrased.

“Yeah, that wasn’t our first choice,” Tormey replied before Brennan then asked about insulation and soundproofing.

“The plans were meant to show we were taking extra care for sound mitigation. We don’t expect this place to be a loud establishment,” the architect answered.

“The loading zone: you’re not certain if it’s on 14th or Hudson?” Brennan asked.

“Objection this was previously addressed,” Tardanico again jumped in.

Magaletta interjected that the corner of 14th and Hudson Streets was where the county indicated that the loading zone would be located.

“I always think of a food compactor it makes a hell of a lot of noise. Will there be a compactor?,” Brennan proceeded.

“To my knowledge, there won’t be a compactor in this space,” Tormey said.

Additionally, Kristen Georges asked if the occupancy in the waiting room is 55 and 17 in the dispensary, which Tormey confirmed. This led to another issue for Georges.

“Why then have nine POS (Point of Sale) systems? Because if you have them all manned, you can’t have another nine customers at each of the POS,” she said.

“You can have them ring up two transactions at once. It’s possible to have one person manning two customers,” Tormey responded.

Nicole Amato noted that Tormey had never designed a dispensary in an area as urban as Hoboken and asked if he had considered using bulletproof glass, to which he said he had not, and if children lived above the dispensary – which he said he was aware of.

Activist Manuel Rivera asked if the dispensary would be accessible to people with disabilities.

“Is there any space there dedicated to people with a disability?” Rivera asked, to which Tormey replied that one counter is designed to be handicap accessible.

Francis Dixon said he received a note about the loading zone and wanted an answer about its location, prompting Magaletta to again note it would be on the corner.

“The applicant … is willing to expand the gradient screening,” Tardanico said.

“I don’t know that you want this facility to be a bar where the windows are completely dark,” Commissioner Jim Doyle, also a councilman-at-large, surmised.

“We can look into it more,” Tardanico responded

Magaletta adjourned the meeting at 10:30 p.m., noting that the traffic consultant and planner still have to testify and a public comment period needs to take place.

The next Hoboken Planning Board meeting is scheduled for Thursday, August 11th at 7 p.m. at will be held in council chambers.

Last night, the meeting was held in the ground floor conference room, where at least 50 people attended, since a municipal court session was scheduled beforehand.