The Hoboken Planning Board unanimously approved (8-0) the controversial Story Dispensary after five meetings that lasted for a total of about 25 hours after 1 a.m. last night. 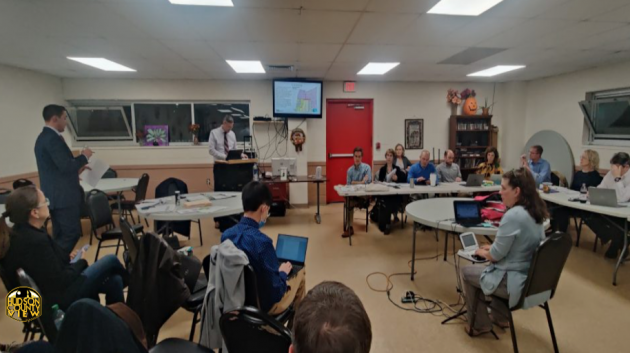 “This application doesn’t meet the spirit of the C-3 zone. People will come from New York. They’ll come from different towns,” Christopher Ling, who works as a planner and architect, argued.

He argued it could be a lounge if another dispensary took ownership of the business, located at 51 14th St.

“You’re not supposed to see what’s inside the dispensary,” Ling added.

He argued that security cameras would have blind spots and that the dispensary would attract large crowds, despite only being able to process about 36 people an hour – despite the potential for up to 90 customers showing up within a 60-minute period.

Story Dispensary attorney Jennifer Porter questioned Ling’s credentials as a planner, and he admitted it was not a large percentage of his practice.

“How long does she get to go on? Don’t tell me to stop! I don’t give a f*** what you say! You’re questioning his credibility!,” a man in the audience exclaimed and said about Porter.

Planning Board Chair Frank Magaletta admonished the man for yelling out, eventually calming down after a short back and forth.

She argued that the city council allowed the dispensary at that site and could have blocked off that part of the 2nd Ward if they were so inclined, but did not.

“They’re leaving it up to the planning board,” Ling replied.

Porter noted in her questioning that a dispensary is allowed in the same building as residential units in Hoboken.

After some confusion, she said they are seeking a loading zone approval on the southwest corner of 14th Street, which would need county approval as well.

“It would be subject to city council approval and renewal,” Porter explained.

For that reason, they did not want to use the garage as a loading zone anymore.

“If we were to say we’re nervous about the queuing … you made it sound like all or nothing,” Commissioner Jim Doyle, also a councilman-at-large, said to Ling, indicating that the issues he raised had relatively simple remedies.

“Do you agree we could cure some of these issues?,” Doyle asked.

“Yeah. But then you’d have to re-do the numbers,” Ling answered.

“Would we be in jeopardy of liability?” Doyle asked about a potential lawsuit.

“If the conditions are met, the board is obligated to approve. This is not really a discretionary decision on the part of the board. Admittedly we have some interesting conditions here. But generally speaking, yes … the board is duty bound to approve,” Planning Board Counsel Scott Carlson said.

Cabalar chimed in that’s it’s up to the board to decide if the conditions have been met, to which Ling agreed, adding that the more conditions, the greater the risk of the project being rejected.

Story management consultant Aaron Epstein explained their agreement with Little Man Parking before getting interrupted by Cabalar, alleging what he recently did in a letter to the board: that Story isn’t the real applicant here.

“Mr. Epstein is not involved in Story Dispensary. It really goes to the transparency concern. The real applicant before the planning board is the landlord. The owner of the property … does have some investment in this property. I think that’s inconsistent with the representation. Why not show the lease to the board?,” he questioned.

“I would object in the entirety because it is wholly irrelevant to the board’s proceedings,” Porter replied.

“You’re the applicant as far as I’m concerned … Oftentimes, a lease is not submitted to us because it’s not proprietary,” Magaletta said.

“Mr. Cabalar is saying there’s testimony that was inaccurate or untruthful,” Doyle interjected.

Carlson asserted that the proper applicant was before the board in there book, and if misrepresentation occurred somewhere along the way, “a judge will figure it out.”

“This is all speculation,” Porter again objected.

Around this time, 2nd Ward Councilwoman Tiffanie Fisher took the initiative to pass around the sign-up sheet so dissenters could make their voices heard.

“There was no attempt by this applicant to introduce themselves to the neighborhood,” former Hudson Tavern owner Thomas Brennan said during the public comment period.

“I am not against permitted cannabis dispensaries from operating in Hoboken. My concern is all about location. I trust that you will vote no.”

Later, Francis Dixon was critical of Epstein. He said that building owners Drew Nussbaum and Jaclyn Fulop, would make $1 million on the sale of Story should the application be approved, as Cabalar argued in the aforementioned letter.

“Jaclyn Fulop is [Jersey City Mayor] Steve Fulop’s wife. This is kind of touchy … Mr. Epstein has been speaking in bad faith throughout this process. This is outrageous,” he claimed.

“It is highly likely this dispensary will have a generally negative impact on the neighborhood and general welfare,” added Deborah Jacobus.

The crowd clapped after every objector finished speaking.

“Integrating dispensaries into our city needs to be done responsibly. Story stands in stark contrast to other owners who have honestly engaged with the community,” Leslie Bradley noted, adding that the owners of Story Dispensary have not testified.

Bradley also alleged that the residential building could lose it’s insurance if the dispensary opens.

“We’ve tried to be as constructive as possible. When we got into this, I don’t think any of us knew what we would get about it. This is new for everyone. We’re trying to fit this into space, and it doesn’t really fit,” Fisher said.

During his closing argument, Cabalar said the application was incomplete, questioning their traffic study, basement use, loading zone, and neighborhood impact report.

“The relief sought from this board is minor and … should be granted,” Story attorney Lauren Tardanico argued, reiterating that this location was permitted by the council when it didn’t have to be.

Carlson said there were conditions of no onsite consumption, a door silencer be installed, the applicant will get a loading zone, provide the board with their required parking arrangement, and a limit on capacity.

“We would use the basement for ancillary storage only. We would eliminate any use of the basement,” Porter replied.

Doyle acknowledged the unrest from some neighbors, but said most of their concerns really weren’t for the planning board to remedy.

“The public’s comments … there are some things we really can’t do anything about. I think the queuing issue, it doesn’t really add up. Fewer will be outside, but they will be packed in like cattle. Do we usually dictate the interior?,” he posited.

Magaletta was even more straightforward in his final assessment of the project.

“There will be a lawsuit no matter what we decide. It’s important to a lot of people, and I appreciate that. Whether or not the site is appropriate has to do with the ordinance. The way I read the law, the applicant has satisfied the requirements. They have met the requirements in this ordinance,” he stated.

“The applicant would be willing to work with the zoning officer on queuing,” Porter said.

“The comments on ethics issues … are really not for us. That doesn’t mean we don’t care, but we have a lane,” Doyle said.

Carlson then asked if Story would agree to appear before the board with an update within six months of opening, to which she agreed.

Ultimately, the board unanimously approved (8-0) a resolution with 14 conditions at 1:12 a.m.

The city council will hear the project next at a date to be determined.

As part of a lengthy statement released this morning, Fisher commended her neighbors for speaking out against the project, claiming “it’s tough to compete against the future governor.”

“ … The fact that our state laws allow this to happen, allows a risky business like this to be in a densely populated residential area and at the base of a residential condo building, without the consent of the home owners above is unconscionable.”