The Hoboken City Council will no longer consider hiring a law firm to explore the possibility of creating a North End Special Assessment District at Wednesday evening’s meeting, with the item removed from the agenda today, an official said. 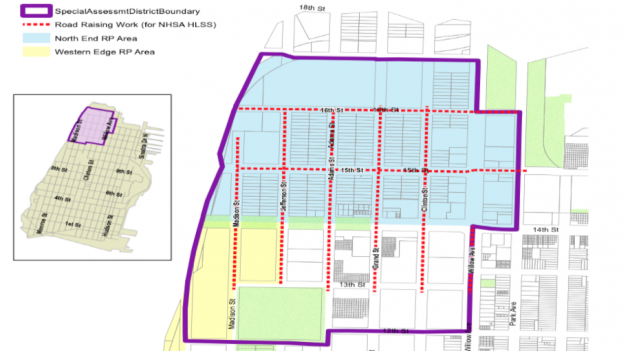 The governing body was going to consider a one-year agreement with McManimon, Scotland & Baumann, LLC not to exceed $25,000 through December 7th, 2023, but those plans have changed, according to city spokeswoman Marilyn Baer.

“That resolution has been pulled for further evaluation and discussion in council subcommittee,” she said in an email following an inquiry from HCV this morning.

Nevertheless, documents attached to the removed agenda item provide some insight on what the SAD would look like.

Those are the construction of a Hudson-Bergen Light Rail station on 15h Street, elevating streets impacted by a new sewer system, street improvements, and the possible relocation of moving overhead PSE&G power lines underground.

“These Infrastructure Improvements will benefit the properties located within the area identified on the attached map,” the letter says,

“You have asked our firm to assist the City by (a) analyzing the applicability of a special assessment district to pay for such Infrastructure Improvements (b) providing the Mayor and Council with an outline and recommendations related to such a district, and (c) if directed, providing the legislation and related documentation and agreements (if any) required to implement same.”

The district would span between Madison Street and Willow Avenue, bordered between 12th and 17th Streets, according to a rendering provided by the city.

The rendering also shows that the new sewer system, which will be installed by the North Hudson Sewerage Authority, will be installed in the majority of the district – with the only difference being that the border is between 13th and 16th Streets.