While it was an anticipated vote among Hoboken politicos closely watching the November 5th ward council races, the city council needed just over a minute to decide to postpone a vote on a resolution regarding pay-to-pay regulations facing recent scrutiny. 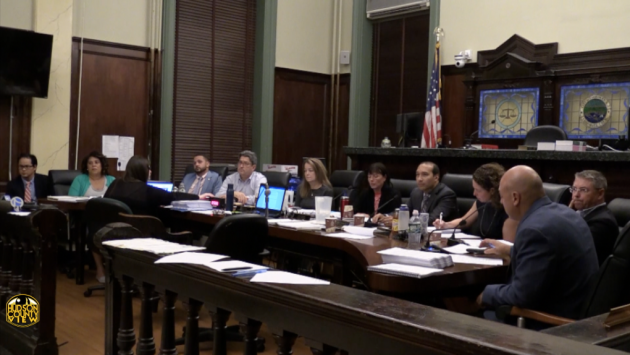 The resolution was introduced by Council members-at-Large James Doyle and Emily Jabbour and sought to double down on the city’s campaign finance laws pertaining to contractors making contributions to political candidates and entities.

2nd Ward Councilwoman Tiffanie Fisher briefly explained why she was making a motion to table, citing a September 3rd legal opinion from Ray Hamlin, of the law firm Hunt, Hamlin & Ridley, suggested the city repeal their pay-to-play regulations since they are unenforceable and also possibly unconstitutional.

“I had a back-and-forth with corporation counsel on this given the history around, at least a piece of this, where he actually has indicated that one of our pieces of pay-to-play are unenforceable.

“So now suddenly there’s an insistence that we race forward and enforce them, something that he has said is unenforceable. He actually received a legal opinion that said it was unenforceable as well.”

Fisher suggested that the governing body hire “conflict counsel” to review the matter in the near future before making a motion to table, which was seconded by 5th Ward Councilman Peter Cunningham.

The motion to table passed 6-3, with Doyle, Jabbour and 3rd Ward Councilman Mike Russo voting against it.

Nora Martinez-Debenedetto, Fisher’s opponent in the November 5th election, said she was “disappointed” that the incumbent delayed the vote on this measure.

“I was disappointed that Councilwoman Fisher voted against even taking a vote on this resolution designed to reaffirm the Councilâ€™s commitment to support and adhere to laws designed to protect the integrity of our elections and our city contracting process,” she said in a statement.

The challenger also pointed out that Fisher filed an ethics complaint against 1st Ward Councilman Mike DeFusco just before the 2017 mayoral race, a clear example of why pay-to-play needs to be taken seriously.

On Friday, Mayor Ravi Bhalla Ravi Bhalla released a statement calling for a special meeting on September 26th at 7 p.m. specifically for a vote on this agenda item.

“I was disappointed that the Council failed to act on this common sense measure intended to safeguard the integrity of our local elections,â€ he said.

â€œWith municipal elections only weeks away, time is of the essence and it is vital that there be a level playing field for all candidates.â€