The Hoboken City Council passed a measure last night opposing the Palisade Cliffs Protection Act, a bill sponsored in the state Senate by Nick Sacco (D-32) and Brian Stack (D-33) that would limit development of along the Palisades in Hudson and Bergen Counties. 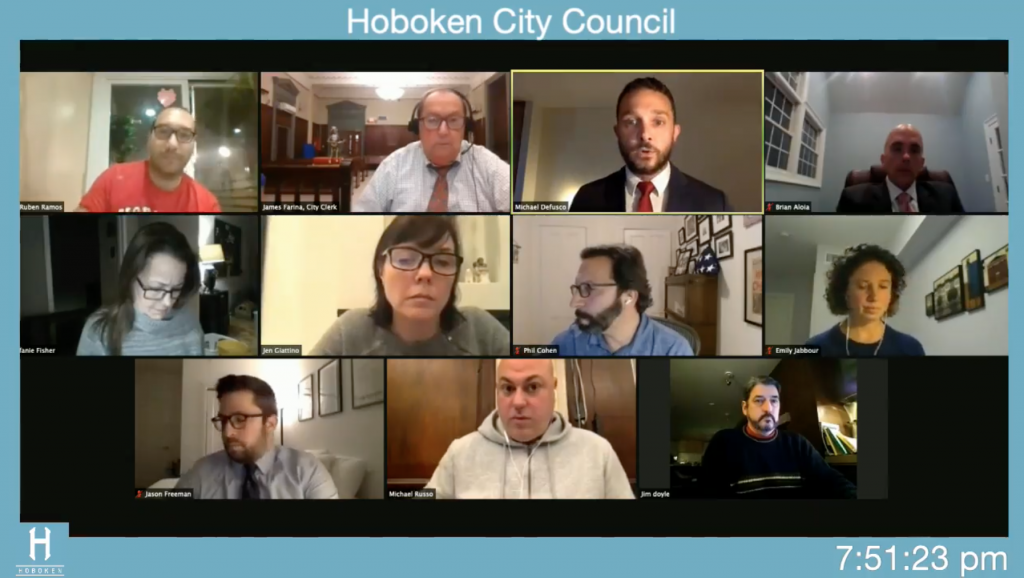 “What prompted this specifically tonight is that I found out late yesterday this was potentially going to [a senate] committee,” 2nd Ward Councilwoman Tiffanie Fisher, who co-sponsored the emergency resolution, said at last night’s meeting.

She said that while she has not been in contact with the Edgewater mayor or council, the  Bergen County borough is the only municipality besides Hoboken that would face a direct impact from the bill – which calls for no development on the cliffs that could exceed 10 feet below the surface of the road, as HCV first reported.

The resolution contends that the bill takes away Hoboken’s “home rule.”

” … Such legislation would have a significant and negative impact on the City of Hoboken, which would be affected in its entirety, by considerably constraining the city’s ability to address critical transportation, infrastructure, housing, and education investment needs.”

The resolution also says that if the bill became a law, the Hoboken Rail Yards Redevelopment Plan, North Hudson Sewerage Authority, and Hoboken Housing Authority could all face negative consequences.

3rd Ward Councilman Mike Russo called for the resolution to be tabled for two weeks to enable the council to have a conversation with their legislators, in particular Assemblywoman Annette Chaparro (D-33), one of the sponsors in the lower house.

However, 6th Ward Councilwoman Jen Giattino, who was elected vice president earlier in the evening and the other co-sponsor of the resolution, said she thought time was of the essence and thought the vote should happen as soon as possible.

“These bills will devastate Hoboken for the benefit of just a few property owners in Union City. Hoboken partners with developers on redevelopments that often include developer-funded infrastructure and resiliency upgrades, municipal and educational investments, and transportation improvements,” Fisher said this afternoon.

“These proposed bills do not protect against overdevelopment or even the character of Hoboken. What they do is put the full burden of paying for critical upgrades solely on the backs of Hoboken taxpayers.”

“Hoboken only has 1.4 square miles and we have to work resourcefully within these land constraints to address the needs of our growing population,” said Giattino.

“New Jersey is a home rule state and Hoboken’s future should not be determined by anyone other than the residents of Hoboken and the city leaders they elect.”

In a joint statement, the two councilwomen said that previous developments in both North Bergen and Union City have caused portions of the Palisades to be “gutted entirely.”

In an interview with HCV last month, Sacco said the legislation had nothing specifically to do with Hoboken and is about keeping development responsible along the waterfront.

Hoboken spokesman Vijay Chaudhuri said that Mayor Ravi Bhalla has been working on attaining a favorable outcome for Hoboken behind the scenes.

“Mayor Bhalla has been working cooperatively, behind the scenes with our neighboring cities and elected officials on matters of development,” he said.

“He is committed to ensuring Hoboken continues to grow in a manner consistent with the scale, charm and character that makes it a great place to live and looks forward to amicably resolving any outstanding issues.”

The bill sponsors could not be reached for comment on Thursday.

Editor’s note: This story was updated with a comment from Hoboken spokesman Vijay Chaudhuri.