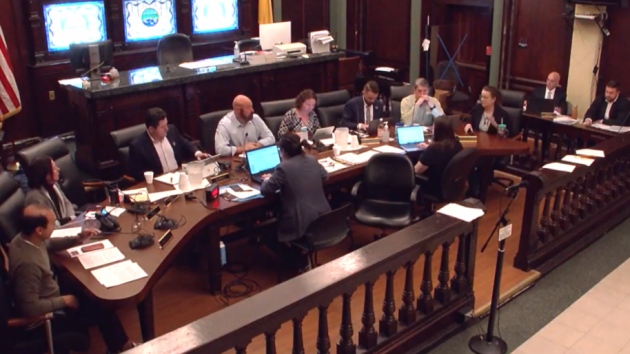 “I don’t think the people understand … this is going to be a travesty beyond belief because it is an exponential growth,” Mary Ondrejka said.

She urged them to pay a stipend to workers to destroy ailanthus trees, also known as the “Tree of Heaven,” where spotted lanternflies nest.

“That is their host tree. They destroy everything. They come back. That is a problem for everyone that owns plants. It’s out of control. It destroys all trees with maples. They need to be really aggressive and plant down those weed trees … You will have a new nightmare next year. This is very, very bad tree. It’s like a devil,” Ondrejka argued.

“Director Gonzalez, would you come up and give a one-minute summary of this?,” Councilman-at-Large Jim Doyle asked.

Department of Environmental Services Director Jennifer Gonzalez said he ordinance would be an amendment to the city’s nuisance chapter that would designate the spotted laternfly as a plant pest.

She also said it would allow them to require the removal of ailanthus trees.

“How long will the property owner have to remove the tree?,” 4th Ward Councilman Ruben Ramos asked.

“This is the time to remove them aggressively, during the winter,” Ramos said.

The measure was approved unanimously (9-0).

Additionally, the Jersey Joint adult-use cannabis dispensary was approved to operate in Hoboken. While women and minority-owned, they have negligible ties to New Jersey as they own a dispensary in Massachusetts.

“You didn’t like the name, and here they are. Maybe you can stop it. I would appreciate that one, and I’m sure the residents would too,” said Manny Rivera said during their Hoboken Cannabis Review Board meeting in May.

The proposal was subsequently approved by the Hoboken Planning Board in July.

“They’re just not having their name on the signage,” 6th Ward Councilwoman Jen Giattino said.

“The ask of the board was for it to not be advertised as Jersey Joint. We can’t require them to change their corporate name,” Council President Michael Russo said.

“I just want to take a minute to support this. We thought they did a very good job. It’s a management team that seems to have a great experience. It’s a good plan,” adding that she thought their location at 1427 Grand St.

“We think this is a good partner in the city. I just feel good about the application. I know the owner is here, and they did a great job,” Fisher added.

The resolution passed 8-1, with Giattino voting no.

5 latest Rebuild by Design concepts put on display in Weehawken