Hoboken City Clerk Jimmy Farina is alleging that 1st Ward Councilman Mike DeFusco went over the municipal pay-to-play rules by thousands of dollars in multiple instances, though the incumbent says he has never been served and considers the matter a political stunt. 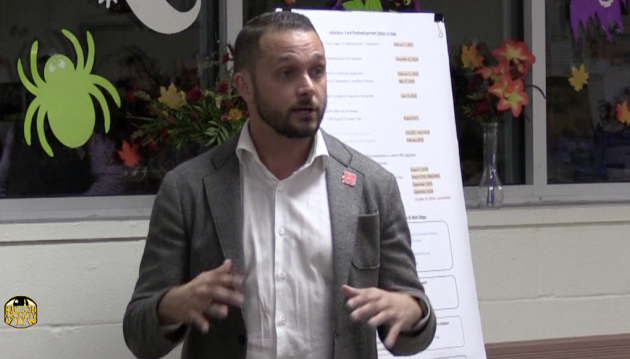 While the October 21st complaint, which was obtained via an Open Public Records Act request, is hundreds of pages long (mostly due to attaching about a dozen campaign finance reports), the heart of it can be summed up quickly.

Farina says that back in 2017, when DeFusco ran for mayor, he received $37,800 from political action committees, with another $44,600 coming in from committees in connection to the November 5th council race.

According to the city’s pay-to-play rules adopted in 2011, an individual candidate is only allowed to receive $500 from each committee, each election cycle, though the enforcement aspect of the ordinance has never been tested since this is the first complaint issued by the clerk.

Farina could not be reached for comment regarding why he choose to file near the end of the election cycle.

Making reference to an outside legal opinion solicited by City Corporation Counsel Brian Aloia that called the city’s current pay-to-play regulations “unconstitutional,” DeFusco added that he is yet to be served and attributing it to another “silly campaign season.”

“After listening to city legal advice and following all relevant state and federal laws, the administration has apparently decided to selectively enforce a law that their own attorneys have deemed â€˜unconstitutional,â€™” he said in a statement.

Back in 2017, 2nd Ward Councilwoman Tiffanie Fisher filed a complaint against DeFusco alleging pay-to-play breaches, but it never moved forward and Fisher previously said that was because she was told the measure was unenforceable.

The city was not immediately able to provide an update on the case on Thursday, though city spokesman Vijay Chaudhuri said the law department “has an obligation to enforce any and all city laws,” including pay-to-play.

According to the ordinance, violations can be costly for candidates, though it remains to be seen how the city would be able to collect any fines or penalties in these circumstances.

” … Any candidate that willfully and intentionally makes or receives any contribution in violation of this chapter shall be liable to a penalty equal to four times the contribution made,” according to city municipal code 20D-7.”

A January 15th memo from Assistant Corporation Counsel Alyssa Bongiovanni to all candidates for office notes that she will also be serving as the pay-to-play compliance officer going forward, requesting copies of all campaign financial report activity.

Her approval as compliance officer was unanimously approved by the city council on January 2nd, though the resolution doesn’t explicitly state how she will assure compliance.

“Using city resources to attack a political opponent days before an election is clearly an attempt by the Mayor and his slate to cover their tracks in securing $20,000 in dark money, funneled through a political committee, from one of the stateâ€™s largest real estate companies with development interests in Hoboken … given this was leaked to the media instead of ever being presented to me, the entire situation reeks of political retaliation,” the councilman added.

DeFusco makes reference to a recent HCV report that noted that a super PAC earmarked $19,420 to spend on the behalf of his opponent, Migdalia-Pagan Milano, who is running on Mayor Ravi Bhalla’s five-person ticket.

She has since said on Twitter that “I have no control over and do not agree with” the PAC’s involvement in the race.

Furthermore, the councilman called it “irresponsible for the press” to cover the story prior to him being served, going on to say that he wouldn’t entertain a longer conversation on “obvious political attacks.”

It is up to Hudson County Assignment Court Judge Peter Bariso to decide probable cause in municipal matters where there is a conflict of interest (this instance would fit that bill) and determine a new venue.

Both his chambers and the Hoboken Municipal Court could not confirm or deny if DeFusco had been served yet.

“Mike DeFusco and his legal team are entitled to defend himself however he sees fit when he is given his day in court. Elected officials should be setting an example for the rest of the public, not picking and choosing which laws they would like to obey.”

The city council tabled a non-binding resolution asking to reaffirm their pay-to-play laws three times (another special meeting was cancelled due to a lack of quorum), with other electeds claiming that the measure wasn’t necessary for the city to enforce what’s already on the books.

City officials said in mid-September that they will try to crack down on enforcing the pay-to-play laws, but they would not consider any possibility of altering the rules until after the November 5th municipal elections.

Also outspoken on the matter is International Brotherhood of Electrical Workers Local 164 Business Manager Danny Gumble, who called the clerk’s filing “illegal” and that the current pay-to-play rules limit freedom of speech.

â€œItâ€™s incredibly concerning to see the mayor and City Clerk illegally attempt to limit our membersâ€™ right to freedom of speech by selectively enforcing unconstitutional limitation of contributions. IBEW, Local 164 has always believed in Councilman DeFusco because he stands up for our middle class brothers and sisters working hard for their families and ensures we only work under safe conditions,” Gumble said.

“He shares the core values of our organization which is why we have always supported him as a candidate. It is reprehensible that anyone would attempt to twist the reasoning for our contributions for their own political gain. Our contributions to any candidate have always been in compliance with all state and federal election laws and in line with the cityâ€™s legal opinion provided to us.”

NJ ELEC Deputy Director Joe Donahue said that the governor enacted a measure on January 5th, 2006, that allows municipalities to set their own pay-to-play laws, which gives them “wide discretion,” though he said he could not comment on the specific regulations in Hoboken.

” … It isnâ€™t within ELECâ€™s jurisdiction to decide whether Chapter 271 gave Hoboken or other local entities the authority to impose a tighter contribution limit on all donors than those enforced by ELEC,” he told HCV.