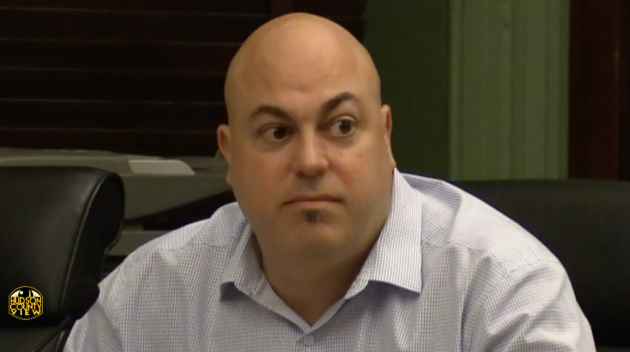 Russo, first elected in 2003 and currently serving his fifth term, was nominated by Jabbour, which was seconded by Councilman-at-Large Joe Quintero.

“I’m going to abstain and councilman I’m hopeful we can work this year on our relationship, to do what we can to have a better relationship throughout the course of the year,” she said.

HCV reported on Monday that Russo would get the nod for council president.

Russo then put Jabbour’s name forward for vice president, which was seconded by Doyle.

That was also approved 8-0(1), with Fisher abstaining since Jabbour co-sponsored an ordinance to raise the maximum amount unions can donate to political campaigns from $500 to $7,200, which passed narrowly last month.

On Thursday morning, Hoboken Mayor Ravi Bhalla congratulated Russo and Jabbour and said he looked forward to working with them.

“I offer my congratulations to Councilman Russo and Councilwoman Jabbour for achieving the role of Council President and Council Vice President,” he said in a statement.

“I look forward to working collaboratively with Council leadership on improving the quality of life for Hoboken residents on a number of initiatives in the year ahead.”

Doyle was the council designee reappointed to the city planning board unanimously (9-0), with 5th Ward Councilman Phil Cohen named to council representative on the Hoboken Business Alliance board by an 8-1 vote. 4th Ward Councilman Ruben Ramos voted no.

While the Mile Square City’s reorganization meeting typically involves appointments to the zoning and rent leveling board, as well as the North Hudson Sewerage Authority.

Russo said they, along with municipal union contracts, will receive a vote at the next meeting. He said they didn’t want to vote on those without the insurance commission meeting first, with a hearing scheduled for tomorrow.

With those items removed, there weren’t many points of contention, thought one exception was a resolution awarding a contract to engineering and land professionals to provide a topographic survey for a portion of Palisades Avenue.

“There’s a bill going through the state legislature which would essentially effect development that would be near to the Palisades [Cliffs]. We need to have conversations as to how that bill would affect development in Hoboken,” said Community Development and Planning Director Chris Brown.

“About the density, of the height of those ares close to the cliff so we’re still doing our own independent study of what the height of the Palisades are relative to Hoboken and that’s the purpose of this here.”

While the contract is for just $9,800, at least a couple people on the dais were  stillnot happy about it.

“If that is truly the purpose, aren’t we better suited to spending our time and energy on fighting the bill that’s going through the legislature as opposed to kind of acknowledging that it passes – it’s so bad for Hoboken so why would we spend a dollar to do anything to support that legislation?,” Fisher questioned.

Fisher, who has floated the possibility of running for state Senate next year, has been outspoken against the measure and the council approved a resolution opposing it last year.

Russo, Doyle, and Cohen argued that the municipality should have that information handy for current and/or potential developers.

The measure would allow Hoboken to survey the centerline of Palisades Avenue from the southern end at Prospect Street in Jersey City to the northern end at 14th Street in Union City, roughly 1.8 miles.

1st Ward Councilman Mike DeFusco said he was torn, since it was a good planning metric, but was unsure why they wouldn’t wait until the bill cleared the legislature – as 6th Ward Councilwoman Jen Giattino said earlier.

“I fully understand your perspective on it, I just think it’s important for us to have that information as we go through these redevelopment zones and have these conversations with developers coming in,” Russo responded.

“I always think it’s unfair for us as a city to not have the information and have to rely on the developer to give it to us. Just my take on it and I understand your position on it as well.”

Ultimately the resolution cleared 5-4, with DeFusco, Fisher, Ramos, and Giattino voting no.

The meeting was originally supposed to include the return of limited in person participation, but was called off due to surging coronavirus numbers.

Editor’s note: This story was updated with a comment from Hoboken Mayor Ravi Bhalla.