The Hoboken City Council approved a $10,000 contract for a lawyer and former judge to review their rent control ordinance to resolve discrepancies that have arisen. 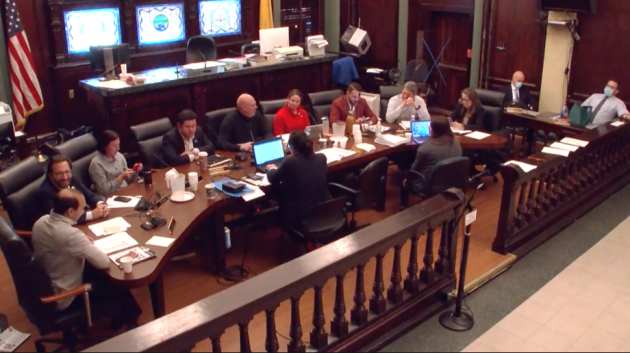 Controversy erupted over a $10,000 contract for attorney and former Hudson County Superior Court Judge Barry Sarkisian to serve as rent control counsel for the city.

“You have to hire this guy from outside? It reminds me of the dumb kid in school who goes to a smart kid and pays him to take the test for him. These things never work out well for tenants,” stated Barry Hoover.

“He’s also a Brian Stack acolyte. And Stack has been meddling in Hoboken affairs for a really long time. The implementation of the law should be equitable to all parties,” Ron Simoncini, who leads a local property owners group, said.

Members of the audience began shouting in agreement with him, prompting a rebuke from Council President Mike Russo.

“I ask everyone to be respectful. If you have issues, take them outside. Please stop,” Russo stated.

Manuel Rivera asked why outside counsel was needed on this, as opposed to someone who already works for the city.

“Sarkisian has not done much in Hoboken before. We have a number of law firms that are very knowledgeable about the ordinance. I don’t know why we didn’t hire one of them,” said 2nd Ward Councilwoman Tiffanie Fisher.

She noted the rent control board is seeking to find a new way to figure out rent control rates different than how it has been done under Rent Regulation Officer Suzanne Hetman. Fisher noted there is a fear they would revise the ordinance to the detriment of renters.

“Why wouldn’t we have our tenant advocate … or even do it internally? It just feels like we’re bringing this outsider in,” Fisher continued.

Nevertheless, 5th Ward Councilman Phil Cohen explained why he thought this would be a benefit for the city.

“This did come out of the Department of Housing. I did get a lot of questions about it,” he began.

He noted it would codify how rent control stabilization rates would be calculated, as well as that there is a conflict between the board and the rent control officer that needs to be resolved.

“This is legal advice. You’re paying a lawyer $10,000. Anything that changes the ordinance would have to come before the city council. He is a retired judge. He has heard landlord-tenant issues like these. He is well-qualified in this area,” Cohen further stated.

He also said there is a controversy over whether new buildings would be subject to an exemption from the rent ordinance.

“The ordinance is currently silent on how these matters should be handled,” Cohen noted, indicating that Sarkisian would not undermine the ordinance, but ensure it is more fairly applied.

“There’s discretion being offered, and it’s creating conflict. The goal here is to create more guidance: People jump to conclusions. I fought really hard to make sure rent increases were rolled backs … I understand there’s fear.”

Cohen insisted the goal was not to affect rent control adversely, but not all of his colleagues were convinced.

“I’m not sure why it’s not going to the rent board attorney,” 6th Ward Councilwoman Jen Giattino said.

Nonetheless, the council majority seemed to be on board with the initiative.

“There have been some changes to the rent board attorney. One attorney left. I would characterize the most recent attorney as more junior,” Councilwoman-at-Large Emily Jabbour said.

“There’s a conflict right now between the rent control officer and the board itself,” Council President Mike Russo reiterated.

“It leaves it open for interpretation,” added Councilman-at-Large Joe Quintero.

“This is for us to change the actual law, so there are no inconsistencies,” Russo noted.

At that point, another member of the audience interrupted and shouted out.

“I’m going to say it one last time. I will hold us in recess ’til perpetuity. We have cackling and calling from the back of the room? We’re grown adults. That’s the problem we have with this country today: we can’t disagree respectfully,” Russo exclaimed.

To the task at hand, Giattino said she remained unconvinced.

“I haven’t been sold: My preference would be for someone who knows Hoboken. Who is in the room with Sarkisian to talk about what the specific goals are?”, she stated.

“She’s walking out the door with a lot of information,” Fisher noted about Hetman.

“I was very skeptical of this. I remain concerned. I have been persuaded of the individual’s ability, the amount of money, I don’t question that,” explained Councilman-at-Large Jim Doyle said.

“I’m willing to give this individual the benefit of doubt. The rent stabilization board, it’s not pretty these meetings. We’ll see what we get. Every person who came up had a preconceived notion. Why don’t you wait and see what happens?”

The measure was approved 8-1, with only Giattino voting no.

“To paint him as anything but tenant-friendly is absolutely wrong,” he said.

Rivera noted that the displacement of lower-income people in Hoboken has occurred partly due to the regular demolition of buildings.

“It’s a way of displacing folks of lower income. If folks don’t have a place to live, that causes instances of health inequality. We need to do better on that,” he said.

“Can we get some people to at least accept 1, 2,3, 4 vouchers of Section 8? It’s very important everyone gets a fair shake.”

In other news, the first reading of an $84 million bond for a new Department of Public Works site passed unanimously (9-0) without no comments from the council discussion, though a few residents complained about the amount and how long it would take to pay back.