Jersey City Ward F council candidate Frank “Educational” Gilmore said that the city offered to nearly triple his salary to get him to drop out of the Ward F council race, though Mayor Steven Fulop’s campaign says there’s “not a single shred of truth to it.” 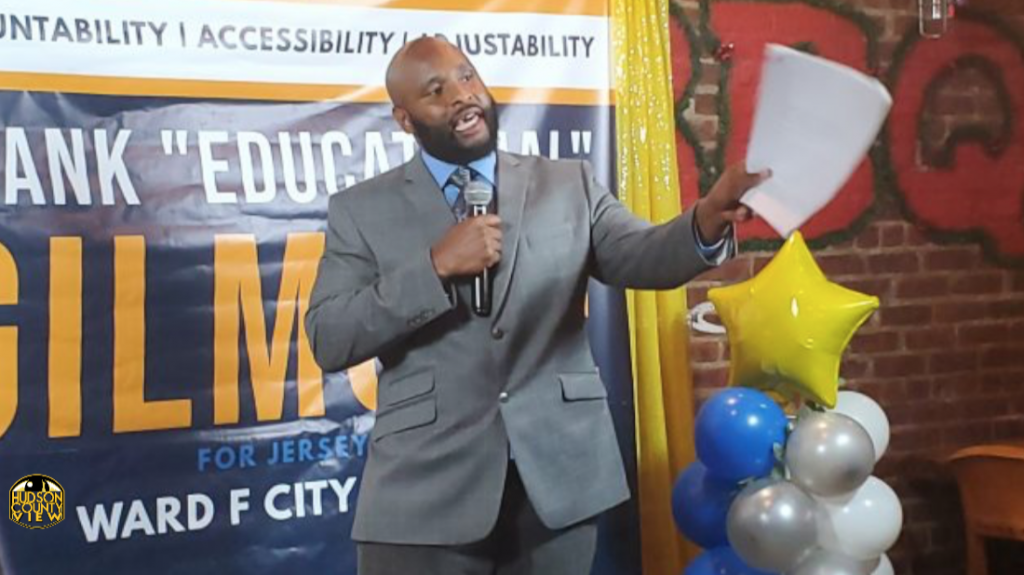 “The administration is petrified. They don’t know what to do. Just the other day, they offered me almost a triple of my salary … They offered me a promotion. I said I’m good making $37, $38 [thousand],” Gilmore said.

He asserted that they offered him the head of a new division to cope with homelessness in the city, a position that would come with the ability to pick his own hours and staff.

Gilmore noted he works for Jersey City in the Department of Health and Human Services in disease prevention, in addition to running his Community Learning Center on Monticello Avenue.

A city spokeswoman deferred comment to Fulop’s campaign, where spokesman Phil Swibinski swung for the fences in the process of disputing everything Gilmore said.

“Frank Gilmore is nothing short of a conman and a grifter who has a track record of total disregard for both the law and the truth,” he began in an email.

“Whether it is failing to file the proper paperwork to keep his non-profit in compliance and then still soliciting money into it, or the total disregard for transparency he has shown by refusing to file mandatory campaign finance reports, or his many performance issues at work, this claim by Frank Gilmore is exactly like everything else he says, which means there is absolutely not a single shred of truth to it.”

Despite that, Gilmore held firm to what he said at the Carvao BBQ last night.

“This administration is in the business of trying to buy people out, trying to keep people quiet so they can continue to do unethical things. And I’m not just not willing to make those kinds of deals,” he told HCV today, claiming the offer was made in the last three weeks.

“They don’t even like me. Why would they give me a raise? I expected them to say they didn’t say that. I look forward to it not being the truth.”

At his event, Gilmore targeted the city on a number of other issues, including Ward F development projects.

“These developers are making out like fat rats in Jersey City. The quality that they’re building at these rapid rates are not productive, it’s not quality stuff.”

His opponent, Ward F Councilman Jermaine Robinson, has been a big proponent of the Morris Canal Manor project, but Gilmore isn’t so sure the current proposal is the best option available.

“He’s putting a white box there. I’m not blocking the rec center. I’m just not going to have you displace a bunch of people to allow a developer to get 12 extra stories.”

He said the rec center should be built by the Bethune Life Center, which was recently designated as park space.

“I just can’t understand how something that costs $38 million, the sprinkler system has been broken every summer since it’s been there,” he said, adding it also doesn’t have bathrooms or locker rooms.

Gilmore also said he’s the only candidate in the race that has the ability to bridge the gap between the community and the police department.

“Officers I communicate with on a daily basis with on the safety and direction of our community and what we need to be doing, they say ‘Mr. Gilmore, you’re the only one that’s accessible. We can’t even talk to the other people in the administration. And when we talk to them, all they do is give us directions,’” he noted.

Additionally, Gilmore criticized the administration for the 17 homicides in the city this year, most of them occurring in Ward F, already exceeding 2020’s total.

Council-at-large candidate Chris Gadsden, a good friend of Gilmore, said over the hour-long program that he expected him to pull off a decisive upset in Ward F, winning on the first ballot.

“You can trust them with your future and the future of your children. Ward F has to change. Jersey City has to change,” Wiley said.

“Team Fulop is only for Team Fulop,” she criticized.

The Jersey City non-partisan municipal elections are on November 2nd.

Bhalla: You can count on me on the local, state and...