While the Hoboken ward council races are still 16 months away, former 1st Ward Councilwoman Terry Castellano is “seriously thinking about” a rematch with Mike DeFusco, the candidate who ended her five consecutive terms in office in 2015.Â 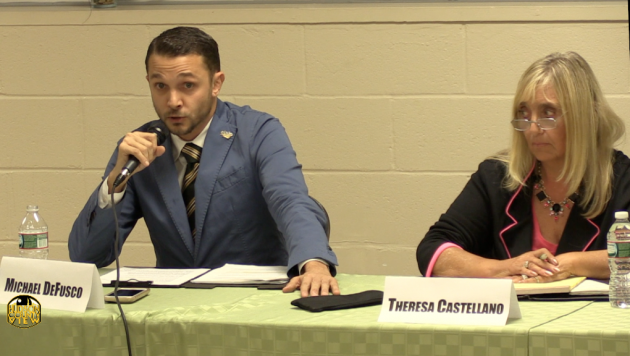 â€œIâ€™m seriously thinking about it. I hear from constituents, I have forged friendships with these people, and they still come to me for guidance. From what I hear, he just kind of dismisses people and they’re not used to that,” Castellano told HCV this afternoon.

” … I was elected five times because I nurtured these relationships. Now: I donâ€™t see that. I feel like Iâ€™m still doing the job.”

DeFusco, with the backing of then-Mayor Dawn Zimmer, defeated Castellano in a hotly contested affair in November 2015.

For the most part, Castellano has stayed out of the Mile Square City’s political arena since then, while DeFusco was the runner up in last year’s mayoral contest, getting bested by Ravi Bhalla (Castellano supported Freeholder Anthony Romano (D-5) for mayor).

While she had a number of heated exchanges with the mayor when they both sat on the council, Castellano said she would consider running on a ticket backed by Bhalla if the opportunity presented itself.

“I would consider for the sake of running things smoother in the 1st ward. We were obviously on different sides on the council, but that happens to anyone that has a long political career. There was a time when Mike DeFusco said heâ€™d never run against me.”

Back in August 2015, when DeFusco announced he was running for council, he said that it was time to “challenge the status quo” since leadership in the ward had become “stagnant.”

If the November mayoral race was any indicator, DeFusco will be a tough test for any challengers next year, given his ability to fundraise and hit doors at a torrid pace.

Eight months after Bhalla was declared the winner, the 1st ward councilman remains one of his most unabashed and outspoken critics.

Ignoring Castellano’s criticisms, DeFusco said he is confident he has done enough to get re-elected in 2019.

“Anyone has a right to run for office, but I’m confident that with my record of delivering results for the First Ward — from securing funding for Court Street and Newark Street pedestrian safety to authoring legislation that protect tenants and much more — the residents of my neighborhood will give me the same strong level of support they have in my two previous elections,” the incumbent stated.

He added that he’s not currently looking ahead to a race over a year away, instead focusing on the job he was elected to do.